Pamphlets on Reincarnation: A Unique Set of Articles in the Scholem Collection

Home > Gershom Scholem > Pamphlets on Reincarnation: A Unique Set of Articles in the Scholem Collection
Judaism

One particular set of booklets compiled by Gershom Scholem in his famous library raises a series of interesting questions... 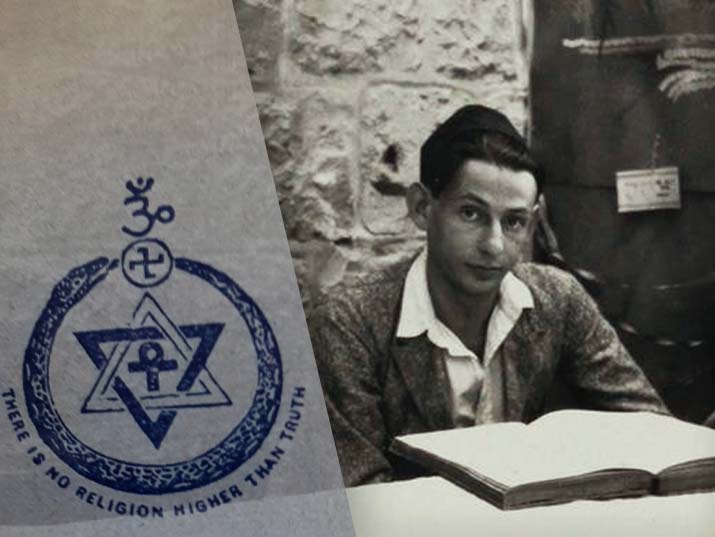 A young Gershom Scholem alongside the emblem of the Theosophical Society

One of Gershom Scholem’s collection habits, which is a boon for researchers, but a nightmare for cataloguers, was to bind together various pamphlets or articles, either by subject or by author. There are probably several hundred bound volumes of this type in the Scholem Collection.

One such item is a hefty red-bound volume, upon which Scholem embossed in gold letters the title “Pamphlets Reincarnation”. 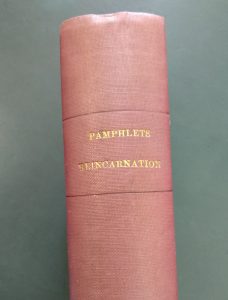 The collection includes eight pamphlets and booklets, seven in English and one in German, published between 1894 and 1928 in New York, San Francisco, London and Leipzig. Among the publishing houses, we find the “Theosophical Society”, the “Metaphysical Publishing Company”, and the “Lotus Publishing Company”.

The titles are in and of themselves a delight to prevue. They include,

“Reincarnation: The Hope of the World” by Irving S. Cooper and “The Doctrine of Rebirth Scientifically Examined” by W. Y. Evens-Wentz, which came out as part of the “Reincarnation Series”. 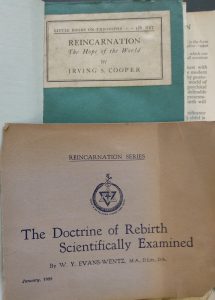 Note the symbols that appear on the cover of the lower pamphlet seen in the image above. These in fact form the emblem of the Theosophical Society, which features a Star of David, an Egyptian Ankh, an Ouroborous (a serpent swallowing its tail), a Hindu Aum and even a swastika, which of course was an ancient Hindu religious symbol long before the Nazis expropriated it. Below the emblem is the society’s motto: “There is no religion higher than truth”.

We have in addition, the German “Die Irrlehre der Theosophie über Re-Inkarnation” (“The Mistaken Teachings Regarding the Theosophy of Reincarnation”), by the famous spiritualist Madame Blavatsky and the “medium” Prof. Dr. Petersilea. 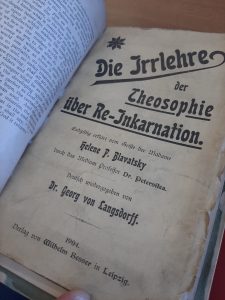 One shocking item to our eyes is Jerome A. Anderson’s 1894 tract “Reincarnation: A Study of the Human Soul”, which, again, prominently features a swastika on the cover. 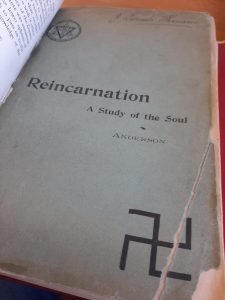 Other interesting titles include “The Memory of Past Births” by Charles Johnston, 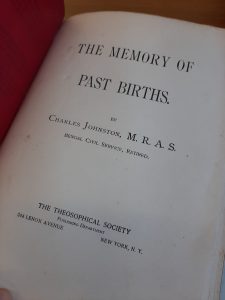 “When a Man Dies, Shall He Live Again?” and “The Necessity for Re-Incarnation”, both by Annie Besant. 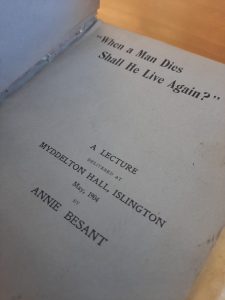 In recent years, the topic of reincarnation has garnered much attention, and numerous works, both scholarly and popular, have been composed about it. However, these early tracts, which Scholem collected and bound together, but did not annotate, await further research regarding the surge of interest in the doctrine in the late 19th and early 20th centuries.

Gershom Scholem himself did address the issue of reincarnation in Jewish mysticism in several publications. He penned the entries on “Gilgul-Neshamot” in the Encyclopedia Hebraica (1964) as well as the entry on “Gilgul” (not “reincarnation”) in the Encyclopedia Judaica (1971). He also published “An Investigation of the Doctrine of Gilgul in 13th Century Kabbalah” (1945), and “Gilgul: The Transmigration of Souls” in his book “On the Mystical Shape of the Godhead: Basic Concepts in the Kabbalah” (1991, Hebrew original 1976).