12,000 Jews were killed in action serving the German Army in the First World War, but Jewish loyalty to Germany was always doubted and questioned. 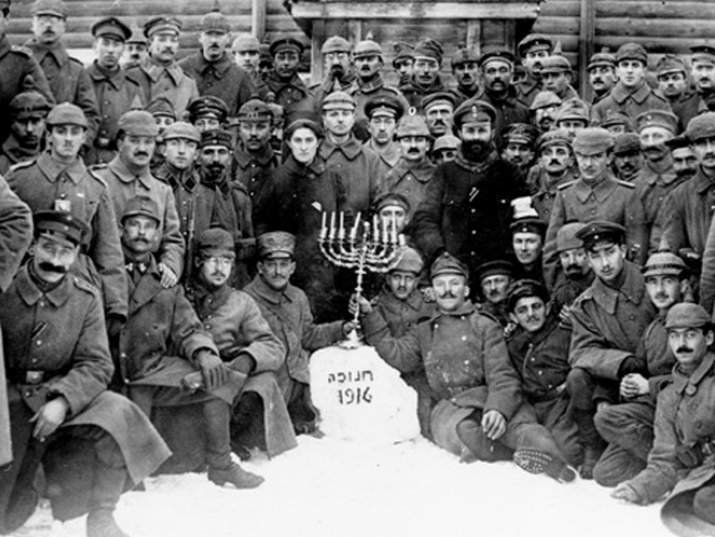 Many countries and nations found themselves fighting against each other during the First World War. Spread throughout these countries and nations were the Jews, citizens of their particular locales; they participated in combat and could be found fighting in the various armies throughout the Great War. Jews have always been minorities in their various countries of origin, yet their percentage in the nation’s armies was always higher than their percentage in the general population. In the same token, their efforts in the war were also greater.

Due to the fact that historically the Jewish people were a nation among many, Jews often found themselves in the absurd and tragic situation of fighting each other on opposite sides of the fence. A Jewish soldier would be standing in front of the opposing force, not knowing that a Jewish brother would be an enemy as well. Legends surrounding the meeting of fellow Jews on the battlefield emerged.

In hand-to-hand combat, Jews were known to cry the “Shema”, which notified an enemy combatant who also happened to be Jewish that their enemy was a brother, and so he would avoid a killing blow. When killing could not be avoided, the utterance of the “Shema” more than once made sure that Jewish enemy soldiers found comfort in each other in death.

The First World War was not the first armed conflict in which Jews fought beside their gentile compatriots, while their enemies included fellow Jews. In the century that preceded the First World War, Jews fought in the armies of kingdoms and Empires from all over Europe. In the New World, Jews could be found fighting for the North and the South during the American Civil War.

The Jews of Germany were quick to enlist in the army of the Kaiser, just as their French and English brothers enlisted in their armies. Almost 20% of German Jewry enlisted. Due to the tension between the anti-Semitic and the more liberal attitudes that German society held towards the Jewish people, many German Jews saw the First World War as an opportunity to prove their love and loyalty to their German homeland.

But very quickly anti-Semitic rumors spread about the Jews’ lack of patriotism and their low enlistment numbers. In October 1916, the German Military High Command announced a Judenzählung, “A Jewish Count”, to find out and report if the claims were true. The results of the report were never published and rumors continued unabated. It was in this atmosphere that Otto Armin (whose real name was Alfred Roth) published the so-called report and its results, claiming it proved that Jews avoided enlistment.

But the anti-Semitic language of the publication reveals Otto Armin’s slanderous intent.

Jews did not remain silent in light of this libel, and Dr. Jacob Segall published a book loaded with facts and figures regarding the Jewish soldiers of the German Army, going into great detail regarding their feats during the war.

Some 100,000 Jews served in the German Army throughout the First World War. 12,000 were killed in action, and no less than 35,000 received medals and accolades.

Despite all that, the rumors and doubt regarding the German Jewish contribution to the War effort never really died down and was an essential part of Nazi propaganda, years before the Nazis took over Germany.