Memories from my Sephardic Grandparents, by James Russell

Greek songs and stories, a book from Morocco, and one ruby-eyed snake ring... 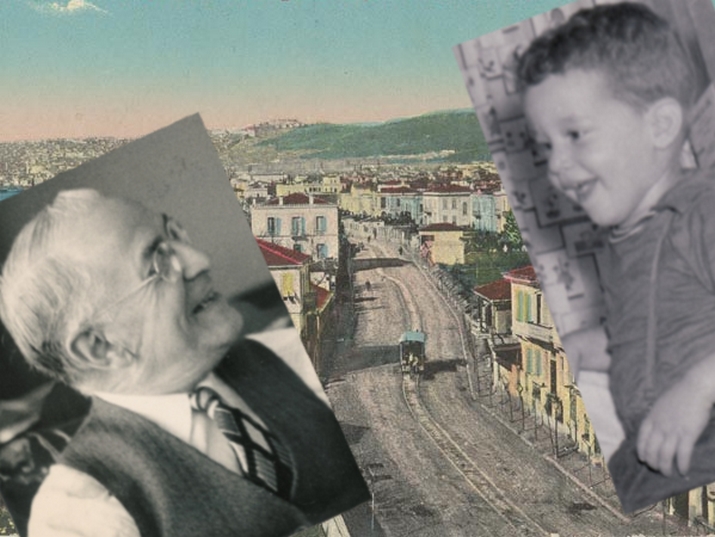 Ladino speakers from opposite edges of the Mediterranean, Russell's maternal grandparents passed down a rich and curiosity-sparking cultural inheritance

At the time of her birth it was one of the great ports of the Ottoman Empire. Her forebears on that side of our family had fled to safety in Muslim Turkey from Toledo in 1492 following the infamous edict of expulsion by Ferdinand and Isabella. Like other Sephardim (except for those from the other kingdom of the Iberian peninsula, Portugal, of course) we preserved the Judeo-Spanish language, Ladino or Judezmo, which my mother Charlotte, her three sisters Esther, Clarice, and Gloria (may their memory be for a blessing), Grandma, and my Great-grandmother Rachel of blessed memory all spoke as their native tongue.

Sephardim wrote Ladino in the notoriously difficult Hebrew cursive called Solitreo; they printed it in “Rashi” and standard square-character Hebrew letters. Great-grandma Rachel (whom we called Manache) knew Ladino, Italian, and, I am told, some Greek and Turkish, and that was enough— by the time I knew her she had reverted to Spanish alone.

Manache had learned English well enough to pass the test on the US Constitution for her citizenship examination, and to converse fluently with my father, an American-born Ashkenazi Jew innocent of Ladino, not to mention Turkish or Bulgarian. Manache passed away in 1964 at the age of 96.

In the year of Grandma Marguerite’s birth, Salonica was the only great city on earth with a majority Jewish population. Most of the Jews belonged to the working classes, and they spearheaded the nascent labor movement in the Ottoman Empire. Many were stevedores, and on Shabbat, the port came to a standstill.

Grandma Marguerite told me when I was very young how she used to distribute socialist newspapers in Ladino to workers at the waterfront— she reminisced about the famous White Tower (Gk. Leukos pyrgos) by the sea. Our family attended the synagogue called Los figos locos, “The Wild Figs”, which, she explained, was named after a place remembered from the Toledo of the fifteenth century.

These memories were still vivid after nearly half a millennium: many Jews still kept the keys to the houses in Spain that they had been forced to abandon.

In the Balkan Wars, when Grandma was twelve, the city reverted to the Kingdom of Greece and returned to its original name, Thessaloniki. Grandma had attended the school of the Alliance Israelite Universelle, where she learned fluent French, and had been set to attend college in Auteuil. But the World War broke out in 1914 and those plans never materialized; she became a journalist for a local newspaper.

Her knowledge of French enabled her to find a job with the French military authorities and to feed our family during the famine in the aftermath of the conflagration that devastated the city, particularly the poorer, Jewish neighborhoods, in 1917.

Manache broke her hip during the Great Fire. It was never set; and when I was little she used to get about the house with a great cane. She was a tall, gaunt woman, bedridden in her last years, and used to call me to her saying “Camina, pasha!” –  “Walk, little prince!”

Grandma, her parents, and many other members of the Saltiel and Ben Ruby families immigrated to the United States in 1920, sailing from Piraeus— the port of the Greek capital, Athens— on the Meghali Ellas, (“Greater Greece”, after the grandiose plan of Venizelos to liberate Ionia and the Hellenic communities of Pontus and the Anatolian interior from Turkish rule).

It ferried thousands of Greek, Jewish, and Armenian immigrants from Athens to the New World. Grandma used to describe the good ship to me when I was a boy as rather less grand than its name might suggest: “half a walnut shell”.

Over the month-long passage the only food was bread and onions that were, she used to add, not very fresh. But the Meghali Ellas bore its passengers safely to New York.

Great-grandmother Rachel was a clairvoyant and practiced magic: I remember being told that she would go and sacrifice a black cock at midnight over the grave of the spirit she discerned had caused an illness in the family. Manache wore a gold ring of entwined snakes, one with a single ruby eye; the other, with a single diamond eye: I inherited it upon her death.

It may have significance as an apotropaic amulet, cf. the brazen serpent Nechushtan of Moses. I am named after her husband Ya‘aqov, whom people called “el bueno“, “the good”, for his kindness and his honesty in business.

In Ottoman Salonica he had been a grain merchant: he was a polyglot and used to strike a verbal deal with the farmers up north in the partly Slavic-speaking province of Macedonia and in Bulgaria, and seal the contract for the price for the year’s crop with a handshake. He always paid the agreed sum, even if it turned out to be a bad harvest. So he was good, if not rich.

The family settled on upper Park Avenue in Manhattan— then as now a poor neighborhood. They advertised for a suitable match for Grandma in the Ladino newspaper, and when each swain came to call, the women would leave a book on the table and hide in the kitchen to see what the prospective spouse did with it.

Most men showed no interest in the book. (That is fair enough, in retrospect: they had not come to visit a library.) One fellow did, but as he was holding it upside-down it was plain he was not literate and therefore a bad match.

Finally, a somewhat older gentleman immersed himself in the volume, not looking up right away when the ladies emerged. So Grandmother married him.

Joseph Sananes, my maternal grandfather, was also a Sephardic Jew and Ladino speaker, but from the other Mediterranean edge of the Iberian dispersion: Tetuan, on the northern coast of Morocco.

The newlyweds settled in a large, comfortable house in the Bensonhurst neighborhood of Brooklyn, New York. Grandpa was a successful businessman in the 1920s.

Those were the days of the Prohibition of liquor in the United States, so he grew grapes in the backyard and made Shabbat wine for our family, as well as the strong anisette liquor raki. Grandma baked honeyed kadayif pastry and cooked the Moroccan tejine for him, along with the traditional Shabbat adafina stew and the delicious dishes of the Jews of Greece.

Ethnic memory in America is often culinary, partly because such innocuous things spice quaintly the melting pot of the shared, diverse culture, but partly too because tastes and smells of early childhood have a visceral power in the memory.

The stock market crash of 1929 that ushered in the Great Depression wiped out the family finances, but Grandpa worked very hard and managed to support his wife, four daughters, and a large extended family. He would enjoy a small glass of raki when he came home from work, and my mother told me he regularly studied the works of the eleventh-century philosopher and Torah sage, the Rambam (Maimonides).

On Shabbat and other holidays, visitors would come to call and Grandma served them raki, coffee, and homemade candied orange peel. The other Moroccan Jews – some of whom were unlettered, rough men – considered my gentle, learned Grandpa a “hakham“, and turned to him as a sage and adjudicator of disputes.

My Grandfather Joseph Sananes, passed away in 1956, when I was three; but I am told he and I were great friends: once one evening after supper he gave me a thimbleful of Turkish coffee in my parents’ apartment on the southwest corner of 164th Street and Broadway in Manhattan and I giggled all night long.

I still treasure his silver tiger-eye ring and have the painted wooden stool embossed with metal studs that he made for me.

But the most precious inheritance is a Psalter given him when he left Morocco for the new world, around 1900 (see Plates 5, 6, and 7). This Sefer Tehillim was printed at Livorno, in the year encoded on the title page as “Ve-zot ha-berakha“, “And this is the blessing” [= 5626, 1865 CE] with the owner’s name embossed on the tooled red leather cover:

“With peace upon Israel! Shelomo son of David/ N[ahon?], May the right hand of God preserve us, in the city of Tetuan, may God protect her.” 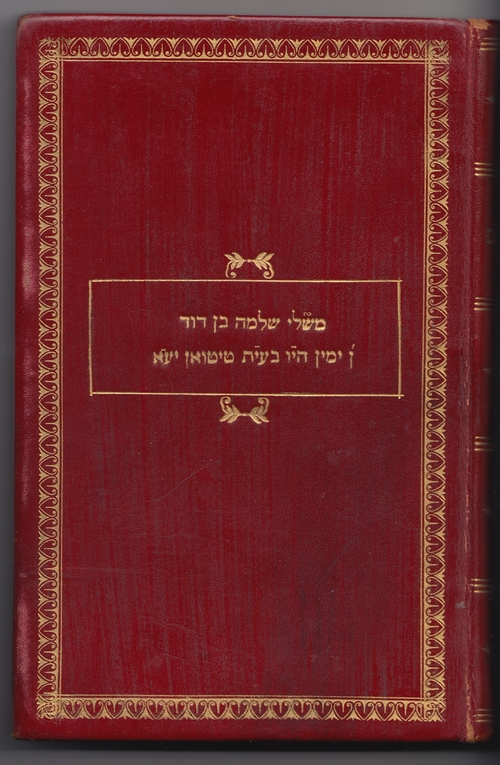 There follows a dedication on the verso of the title page: 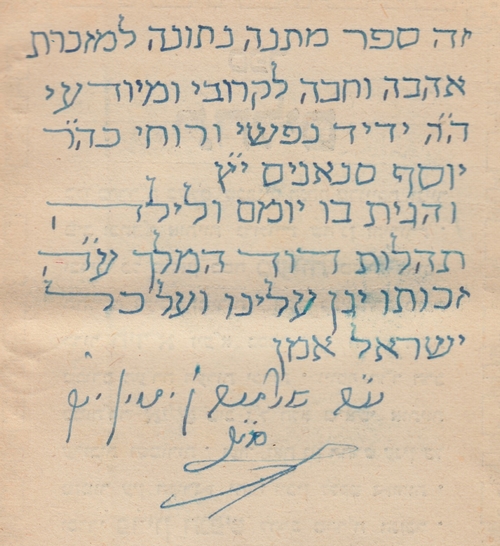 “This book is a gift given as a memorial of love and affection to one close to me who is from amongst those who know God’s law, the friend of my soul and spirit: in honor of Rav Joseph Sananes, may his Rock watch over him. ‘And thou shalt discourse upon it by day and by night.’ (Joshua 1.8) The Psalms of King David, peace be upon him: may he by his merit defend us and all Israel, Amen.”

This much, then, for the circumstances of the written evidence.

“Write it down!” the historian Simon Dubnow commanded the Jews of the ghetto of Riga before the Nazis murdered him in 1941. So, one writes, in love and vengeance.

But of the life itself there is much more that cannot be set down in any book, but that moves and speaks in color and sound and scent in the tableaux vivants of the chambers of the mind where the past lives— the lazy warm light of a Sunday afternoon, the taste of fish cakes and rice with tomato sauce and fried peppers in a little Brooklyn kitchen, the crackle of fijuela pastries, the hard sweet rolls called roscas.

Stories about Djuha, the holy fool, and the way Grandma told them as cousin Michelle and I hung on every word in enraptured delight: The time he taunted the cat who snatched his fish by saying, “You’ve got the fish, but I have the recipe!” or the time he asked the wind to help him carry the heavy bag of flour he needed to bring home…

The melody of the Greek lullaby Grandma sang “Samiotissa” (“The girl from Samos”) and of the Ladino song “La vida dó por el raki” (“I would give my life for raki!”)

And still, beyond, remoter memories: a white tower, the flowering Aegean sea, men in fezzes, the hushed Sabbath of Salonica.

And before that, in the backward and abysm of time, wild fig trees in a dry Castilian landscape, and the arabesques adorning the walls of a holy house in Toledo.

It is said that the Holy One, Blessed be He, will accomplish the resurrection of the dead through His perfect memory of all they were and all there was.