The Central Archives for the History of the Jewish People
11.10.2018 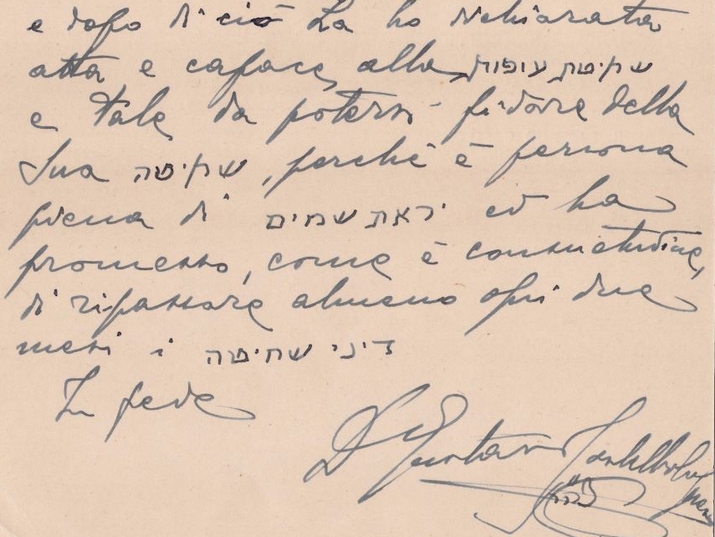 In recent years, the search for women’s equality in various areas of Jewish life has flooded the Religious Zionist sector. Women demand that their right to study Torah be recognized, they are acknowledged as qualified and capable of ruling on matters of Jewish marital law, and there are those who believe it will not be long before women will be serving as community rabbis.

At the same time, we see a certain level of radicalization in some groups within Religious Zionism. For many years there has been no mixed dancing at celebrations (many places a partition between the circles of men and women, and many families even segregate between the tables of women and men), and religious male soldiers refuse to be trained by women or participate in events in which may include a woman singing. This context gives added significance to the certification granted on the 8th day of the Jewish month of Iyar in the Hebrew year of 5693 (1933), by Rabbi Gustavo Castelbolognes, Chief Rabbi of Padua in Italy, to Emilia Morpurgo which authorized her to slaughter chickens.

Rabbi Castelbolognes, like the vast majority of Italian rabbis, was stringent in his observance of the Torah commandments and was even removed from his position as rabbi of Tripoli by the authorities due to his war against Jews opening their stores on the Sabbath. The Rabbi wrote on the certificate that Mrs. Morpurgo had undergone sufficient training in checking the slaughtering knife and was well versed in the correct ritual slaughter of chickens from both the halachic (Jewish law) and practical aspects.

In his certification, the rabbi declared that Emilia is authorized to slaughter chickens due to her expertise in the laws of Kosher slaughter, because she is Godfearing and, in part, due to her promise to review all the laws of ritual slaughter every two months.

A Tradition of Female Ritual Slaughterers

Jewish law does not forbid women from performing ritual slaughter. The Mishna in tractate Chulin determines, “Everyone may slaughter and their slaughter is Kosher, apart from a deaf-mute and a minor, lest they ruin the slaughter (Chulin 1:1).”

In the Shulchan Aruch (Yoreh Deah 1:1) Rabbi Yosef Karo also ruled that meat slaughtered by a woman may be eaten. The Rema (Rabbi Moshe Isserles), the foremost authority of Jewish law in the Ashkenazi world, noted that it was not customary for women to slaughter, but he too did not forbid it. Rabbi Yosef Teomim – the 18th-century rabbi of Frankfurt and author of the work of Jewish law named “Pri Megadim,” only permitted women to perform ritual slaughter if their knives were well checked, and on the condition that they did not have a tendency to faint at the sight of blood.

In his book on the laws of ritual slaughter, Eldad Hadani, the famous ninth-century traveler, forbade women from slaughtering, making waves in the literature dealing with Jewish law in the Middle Ages – perhaps serving as testimony that women did indeed perform ritual slaughter at that time. In any event, there are several historical testimonies of female ritual slaughterers, which have already been discussed by Reuven Bonfil in his book “In a Silver Mirror: Jewish Life in Italy During the Renaissance,” by Bezalel Roth in his book “The Jews in Renaissance Culture in Italy,” and Shlomo Simonson in his book “The History of the Jews in the Duchy of Mantua.”

A City of Innovations

The first Jews came to Padua in the Middle Ages but its Jewish ghetto was only established in 1601. The congregation was known for the relatively large number of Jewish doctors it produced and was known as a center of Torah study and dissemination due to its printing press – one of the first in the western world. The most renowned of the famous Torah scholars who lived there was Rabbi Meir son of Yitzchak Katzenellenbogen, the Maharam of Padua (1473-1565), a cousin of the Rema who served as head of the Yeshiva and rabbi of the city’s Ashkenazi community.

The Morpurgo family of Padua was a Godfearing, religiously observant, Zionist family. Emilia was the wife of Renzo Chaim Morpurgo, a scion of the well-known Morpurgo family who came to Italy from Marburg in Austria, and whose descendants lived in various communities throughout Italy including Padua in the north. Tirtza, Renzo Chaim’s mother, was known for her righteousness and support for rabbis and institutions in the Land of Israel. Underneath the family house in Padua was a Mikva, a ritual bath.

In the Morpurgo family archive, there is a file which contains certificates of ordination as ritual slaughterers which were given to Mordechai son of Meir – an ancestor of Renzo Chaim, to his father to Renzo Chaim himself, and of course, as discussed above, to his wife Emilia. There seems to have been a family tradition which encouraged the study of the laws of ritual slaughter, perhaps due to religious outlook and perhaps in order to guarantee a supply of kosher meat even in the absence of a professional slaughterer.

The three children of the Morpurgo family immigrated to Israel. The first to immigrate was the youngest son, Edgardo Uriel. He was born in 1923 and immigrated to Israel with the Youth Aliyah movement in 1940 where he studied in Mikveh Yisrael. During the Second World War, Edgardo Uriel served in the Jewish Brigade in Italy and enabled a Holocaust survivor to immigrate to Israel with his certificates. He returned to Israel in 1947 and began his studies in the Technion in Haifa. He enlisted to the Haganah in January 1948 and was killed in April 1948 in one of the battles to capture Haifa.

The oldest Morpurgo son, Marco Mordechai, was born in 1920. He left university to join an agricultural training settlement in Italy and immigrated to Israel in 1945 to Kibbutz Sde Eliyahu. He was killed in August 1948 in the region of Kibbutz Sde Eliyahu, leaving behind a wife and two daughters. The middle chile, Tirzah, also settled in Kibbutz Sde Eliyahu, where she started her own family. Emilia and Renzo Chaim Morpurgo immigrated to Israel after their sons were killed and settled in Sde Eliyahu where they lived until the end of their lives near their daughter, daughter-in-law, and grandchildren. Emilia died in 1963, and her husband passed just a few months later.

This article was originally published in the 22nd issue of Segula magazine.