A Parrot from India Recites ‘Shema Yisrael’ in Cairo

A particular parrot mentioned in a manuscript from the famous Cairo Genizah possessed an impressive knowledge of Jewish scripture! 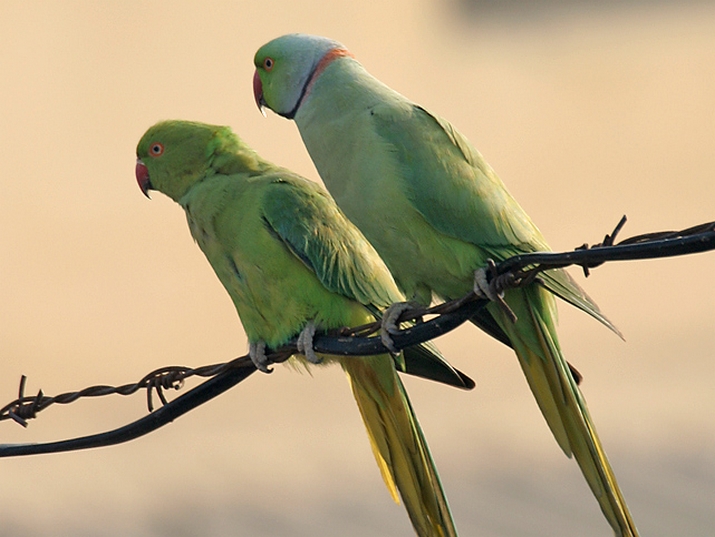 The parrot in the picture is a Rose-ringed parakeet, whose scientific name is Psittacula Krameri. This parrot, which is common throughout the Indian subcontinent, is especially talented in imitating people, and served as a pet in ancient periods. Photograph from Wikipedia

In chapter 10 of the Book of Kings 1, we read of “monkeys and parrots” (“kofim v’tukim”) which are brought to King Solomon as precious specimens from abroad. The words originate from ancient Sanskrit, and the unusual merchandise brought from India arrived with their Indian names, which is how they were presented before the residents of the Mediterranean who were unfamiliar with such animals. This led to words in Sanskrit appearing in the Bible.

Hundreds of years later, in early 12th century Cairo, Yitzchak ben Shmuel Hasfaradi wrote a commentary for the Book of Kings, and had to interpret the word Tukim – “Parrots”. At the timeת trade between Egypt and India, via Yemen, was flourishing and Jews were active partners in this trade – as can be seen in documents found in the Cairo Genizah. The Cairo Genizah is a famous collection of ancient Jewish manuscript fragments, which for many centuries rested in the dusty storeroom of Cairo’s Ben Ezra synagogue. It contained around 300,000 items, some of them over a thousand years old. The collection was only discovered by European scholars in the 1750s, and it has since been dispersed among different institutions around the world, including the National Library of Israel.

Yitzchak ben Shmuel Hasfaradi is a familiar figure from the Genizah – he was a prestigious dayan [rabbinic judge] in Cairo, and his signature adorns many certificates discovered in the collection. When Yitzchak ben Shmuel wanted to interpret the word Tukim, he could make use not only of his linguistic knowledge, but also of his personal acquaintance with Jewish merchants who arrived from India bearing precious local products and exotic merchandise.

This is how Yitzchak ben Shmuel interpreted the word Tuki (the singular form):

“It means albabaj, (ببغاء, the Arabic words for parrot), which is green, and is a kind of bird which comes from the lands of India and knows how to talk.”

Yitzchak ben Shmuel then offered a different explanation for the meaning of the word tuki, which he argued comes from the word ‘b’tavech‘ – meaning “in the middle” or “between” – as the bird does not really understand how to converse like a human being, but is neither completely nonverbal like most animals, “its language is similar to the language of people, and therefore they are called tuki, in other words, ‘in the middle'”. In Hebrew, the words tuki and tavech have a similar spelling.

After the linguistic interpretation, Yitzchak ben Shmuel adds personal testimony from Cairo, from the house of the Governor of Egyptian Jewry in the late 11th and early 12th century, Mevurach ben Sa’adia:

“And I saw a parrot in Cairo, at the home of our master Governor Mevurach which was given to him by a Jew who came from the lands of India, and he indeed taught it many verses, and I heard him reciting all of the Shema (a traditional Jewish prayer praising the one God), until the word echad (“one”), and he extended the word echad – as Jews customarily do, and the entire verse of Hashem Hoshia, and the entire verse of Tehillah L’David, in other words, chapter 145 of Psalms.”

Reading Yitzchak ben Shmuel’s description of a parrot capable of reciting Jewish prayer helps us to better understand the critical words of his contemporary, Rabbi Yehuda Halevi, about those Jews who recite their prayers ‘like the words of a bird and parrot’.

The article is based on the writings of Mordechai Akiva Friedman in his book ‘HaRambam, HaMashiach B’Teiman v’Hashmad’, pages 10-11. The photographs are of the Midrash Elziani manuscript kept at the National Library of Israel, as part of the Rosetta Project.