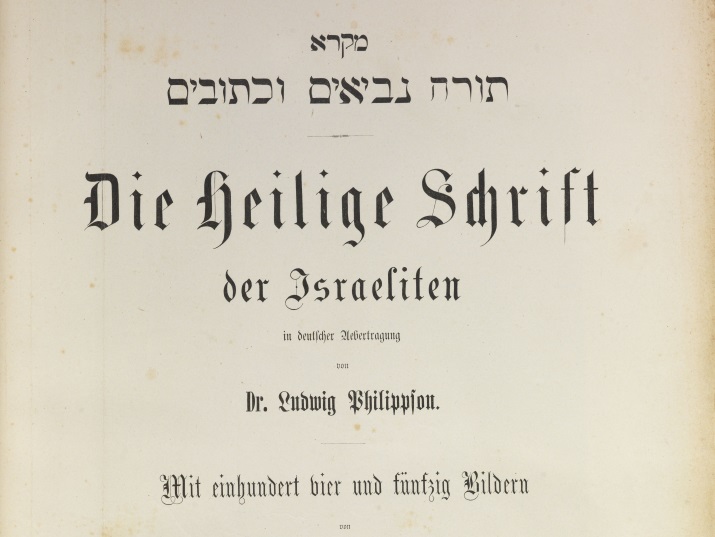 Gershom Scholem, one of the greatest Jewish scholars of the twentieth century and an important Israeli public intellectual, had deep roots among the Jewish bourgeoisie of Germany and the family Bible chronicles that particular Jewish sensibility and culture.

The family Bible belonging to Gershom Scholem’s mother, Betty Scholem (née Hirsch) is a chronicle not only of the simchas and life events of one singular family. It is also the chronicle of the fate of the greater German Jewish community before the Second World War.

The first inscription in the Bible announces that this is the chronicle of the family of Hermann Hirsch, oldest son of the butcher Aron Hirsch and his wife Brune, from Reetz in der Neumark (today, Recz, Poland). We read that Hermann had eight children: five sons (Siegmund, Arthur, Hugo, Fritz, and Hans) and three daughters (Betty, Clara, and Käthe).

The next generation recorded in the Bible includes the four sons of Arthur and Betty Scholem—Reinhold, Erich, Werner, and Gerhard (later known as Gershom)—and the two children of Hans Hirsch—Johanna and Hermann Hirsch. The birth records conclude with Betty Scholem’s grandchildren Edith, Günther (later known as David), Renate, Irene, and Arthur. In fact, grandson Arthur’s birth in October 1927 is the latest simcha recorded in this Bible.

This family strongly demonstrates the declining birth rates among Jews in Germany, and German Jews had, on average, two-children families long before their Christian neighbors. Hermann Hirsch had eight children. His three adult children had four, two, and no children. Betty Hirsch Scholem’s four sons had a total of five children. Even excluding Gershom Scholem’s childless marriage with Escha Burchhardt, the Scholems were below the average of 2.33 children per Jewish family in Prussia in 1925 (though above the average of 0.69 children for families with one Jewish parent and one Christian parent). Factors that likely contributed to their family size were their residence in a big city and the turbulence within their marriages.

As a result, it is not clear if other marriages were with non-Jewish spouses, though most were not, in fact. However, readers of Gershom Scholem’s memoir, From Berlin to Jerusalem, will recognize two mixed marriages listed here without comment: Käte Hirsch to Walter Schiepan in 1911 and Werner Scholem to Emmy Wichelt in 1917. It is also recorded in this Bible that Gershom Scholem and his first wife, Elsa “Escha” Burchhardt, married on 5 December 1923—Gershom’s 26th birthday. (In From Berlin to Jerusalem, Scholem writes, “We married in November 1923 on the roof of the Mizrahi teachers’ seminary.”)

Many of the entries in the Bible mention where events took place. Fritz Hirsch was born in 1875 and died in 1876 in Leobschütz (today, Głubczyce, Poland), where Hermann was then working for the Jewish community. By 1878, the family had moved to the Berlin area. The wedding of Betty Hirsch and Arthur Scholem took place in the newly built synagogue of Charlottenburg, then an independent city adjacent to Berlin. In the years before World War I, Charlottenburg had an affluent population, a well-respected technical college, new department stores, and a sizeable Jewish community with several synagogues. Among them was a private synagogue partially owned by Betty’s father.

When Betty married Arthur and moved to central Berlin, she entered a different world from Charlottenburg. Though central Berlin also had a large Jewish community, it was more diverse than Charlottenburg—religiously, culturally, and economically. It was also the seat of royal power and the center of Germany’s newspaper industry, which was important for the Scholems, who were printers. In the years before World War I, Betty’s sister Käte and brother Hans lived in Schöneberg, another independent city adjacent to Berlin. Though generally not as affluent as Charlottenburg, Schöneberg was largely middle-class and had a substantial Jewish community. The so-called Bavarian Quarter of Schöneberg was home to particularly large, upper-middle-class Jewish population in the 1920s and early 1930s.

While Aron Hirsch worked a butcher in the small town of Reetz, which had less than 100 Jews, Hermann Hirsch became a successful man and a leader of the Jewish community in Charlottenburg. In this Bible, he recorded a number of happy events, including the purchase of a house in Charlottenburg, the purchase of property for the construction of a synagogue, and his election to Jewish communal office. He was active in Berlin Jewish communal affairs. Two of Hermann’s children were able to study at university, a rarity for any Germans in that era and something exceptionally unusual for women. It is noted in the Bible that Hans Hirsch earned a doctorate at the University of Berlin and Käte Hirsch earned a doctorate in medicine at the University in Freiburg. She then opened a medical practice in Schöneberg. Hans, who worked as a chemist, later received his license as a patent attorney.

The family’s death records are quite telling. The first four deaths – those of Hermann Hirsch’s parents and in-laws – are listed with a curious mix of the Hebrew month and Christian year, e.g., 17 Sivan 1864. All other deaths are listed only with the Christian/secular date. Among the most striking things about this family record is the high rate of child mortality. Siegmund Hirsch died at the age of seven, Hugo at the age of two. Arthur Hirsch died when he was only 11 days old, and Fritz died days before his first birthday. Clara lived to be only 17 years old. Only three of Hermann Hirsch’s children lived to adulthood: Betty, Käte, and Hans. In fact, as late as the 1880s, more than 40 percent of all German Jewish deaths occurred before the age of fifteen. Yet high as that proportion seems today, it was still much lower than the equivalent among non-Jews, which remained above 50 percent into the twentieth century. German Jews also had a higher life expectancy than Christian Germans. However, the final death recorded in the Bible was that of Arthur Scholem, Betty’s husband, who died in February 1925 at the age of 61.

This Bible’s inscriptions capture the experience of several generations of the German Jewish middle class. It is a story of migration and urbanization. It is a tale of secularization, bourgeoisification, and educational and professional advancement. It is a story of Jews becoming Germans, or at least maintaining a hybrid identity. However, it was an experience that ended in dispersion and destruction. Hermann Hirsch’s three surviving children all experienced the Holocaust. In 1939, Betty Hirsch Scholem escaped to Australia. Hans Hirsch was able to flee to Brazil. Käte Hirsch Schiepan was deported to Theresienstadt, where she died in 1943.

The fate of Betty Scholem’s four sons, whose births are listed in Bible, also exemplified the fate of the historic Jewish community in Germany. Like so many German Jews, Gershom Scholem went to Palestine; however, in contrast to most German Jews in Palestine in the 1930s, he was a long-time resident of the Yishuv, having made aliyah in 1923. He became a master of the Hebrew language and a giant in the Israeli intelligentsia. Nonetheless, his professional and social circle in Jerusalem remained notably German or Central European. Reinhold and Erich Scholem immigrated to Australia during the summer of 1938 and began the process of rebuilding their lives. After many years, Reinhold established himself and enjoyed prosperity. In contrast, Erich struggled to regain the business success that the Scholems had known in Berlin. Their brother Werner Scholem, who had been a leader of the German Communist Party, was arrested in 1933 by the Nazis and sent to prison. Even though a court acquitted him of the legal charges against him, there was no way out of the Nazis’ system of injustice and terror for him. He was murdered in the Buchenwald concentration camp in July 1940.