Home > History of Israel > The Initial Proposals That Fell Short: How the Israeli National Emblem Was Chosen
Land of Israel

Two days before the declaration of independence of the State of Israel, the members of the People’s Administration realized that they forgot a rather important detail about the polity about to be formed: They had yet to decide on the State’s name. Various suggestions were tabled at that meeting: Judah, Zion, and of course, the eventual winner – Israel.

Three weeks after the State’s establishment, the interim provisional government invited the citizens of Israel to propose a design for the national flag and emblem. The design guidelines left the competing artists with room for creative license.

The guidelines specified which colors were to be used: sky-blue and white “and any other color as per the artist’s taste” and the emblem was to feature a seven-lamp candelabra and seven stars. The guidelines also stated that,  “Any other suggestion or idea is welcome,” and included the disclaimer that, “The government is not obliged to accept any of the suggestions received.”

No inscription was specified and no guidelines were given regarding borders or framing of the emblem. 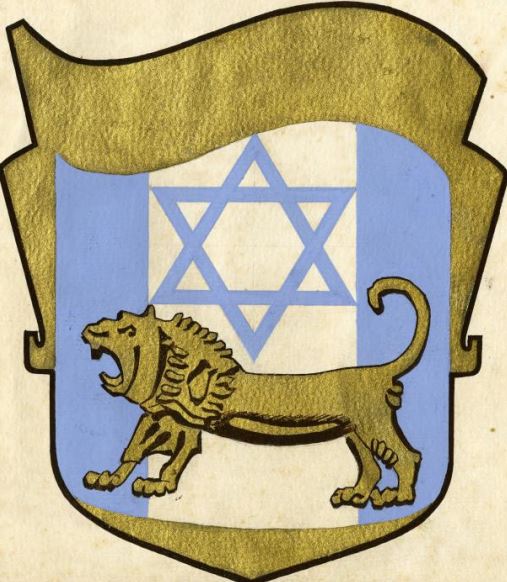 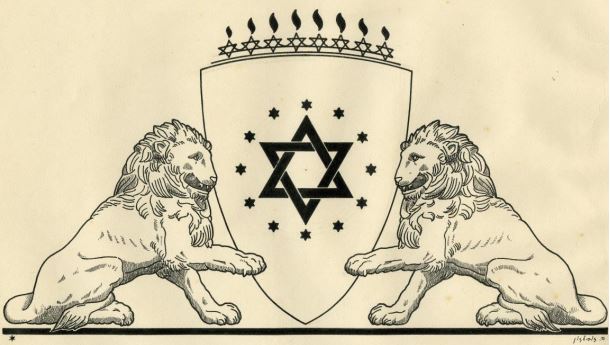 The Provisional Government’s call yielded 450 proposals submitted by 164 applicants. One by one they were all rejected by the committee established for the purpose. A second ad calling for submissions was published. In the second round, the proposed emblem by Gavriel and Maxim Shamir of Shamir Brothers Studio carried the day. The combination of five elements in the Shamir Brothers proposal convinced the commission members that they had found a winner:

The menorah and the stars appeared as required by the tender. The Shamir brothers added three additional elements: The olive branches, the heraldic shield and the colors.

They chose to design the menorah in a modern fashion. “Our intention was to create a modern symbol and forego the traditional element,” they revealed in an interview to ‘Maariv’ (Hebrew). The olive branches were added as the brothers found them to be “the most appealing expression of the love of peace among the People of Israel.” In the same interview the brothers told of how they  had thoroughly studied all the emblems of the countries of the world.

In the course of their research they discovered that no country had a candelabra in its emblem, but one country did have a six-pointed star, like the “Star of David”. It is most likely that they also learned that the vast majority of national emblems were in the shape of heraldic shields, such as those used by royal and noble houses since the middle ages.

Although the design had been approved, the Shamir brothers were asked to make some changes to the emblem. Firstly, to add the name “Israel.” Second, to replace the modern menorah with the one carved into the Arch of Titus in Rome. After examining two versions prepared by the brothers, the committee decided to drop the stars. The final proposal was submitted to the commission on February 10, 1949 and was approved unanimously.

Two days later the official newspaper of the Provisional Government published an announcement of the national emblem signed by the commission’s chairman, Yosef Sprintzak. A few months later, the Shamir brothers prepared a final version of the emblem, in which the base of the menorah was embellished.

The unveiling of the emblem brought with it both praise and criticisim. The critique focused on the graphic design and the choice of the menorah from the Arch of Titus, which is at odds with the description of the temple menorah as described in the bible. “Apparently foreign hands have been involved, and it is not all in accordance with the sacred text,” was the ruling of Chief Rabbi Isaac HaLevi Herzog.

An article published on February 21, 1949 in the ‘Yedioth Ahronoth’ newspaper posited: “What would the artists prefer: A design that was approved, yet critiqued, or one that was rejected and acclaimed by all? We would safely guess that the Shamir Brothers would choose the former.”

About the authors of the article

Daniella Gardosh-Santo formerly served as head of the Children and Youth Department for Israel’s public broadcaster Channel 1. She is the daughter of renowned cartoonist ‘Dosh’ – Kariel Gardosh. Along with her brother she initiated the Dosh prize for cartoonists. Daniella and Yoram Shamir were co-curators of the exhibit “More Than Just an Emblem” at The Israeli Cartoon Museum in Holon.

Yoram E. Shamir has been studying graphics for the past decade. He recently  curated (along with Rotem Kislev) an exhibit on the National Library website titled “Football Under the Auspices of His Majesty.” Over the last three years Shamir has edited two books on graphics as well as a website devoted to the works of his father and uncle – The Shamir Brothers.