The Renaissance Woman Who Documented the Scientific Revolution

During the Reign of Terror Marie-Anne Lavoisier never surrendered in the face of persecution and kept the Scientific revolution alive and safe. 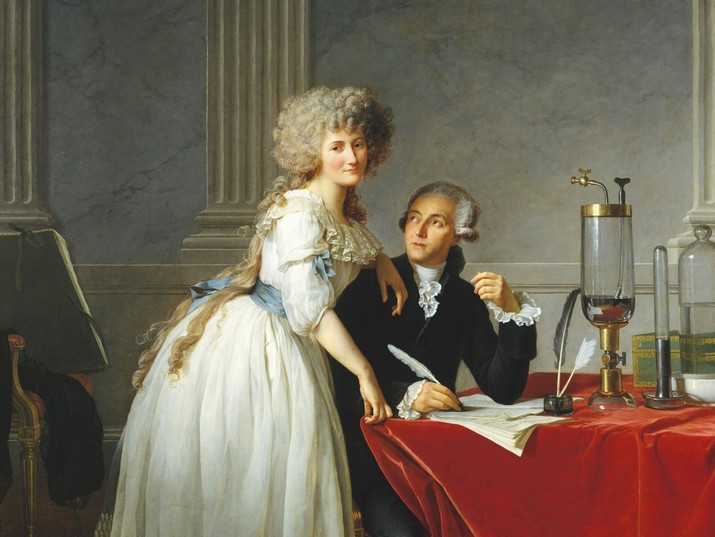 Marie-Anne and Antoine Lavoisier by Jaque-Louis David
When Marie-Anne Pierrette Paulze was 12 years old, she was already courted by the men of her social milieu. Precocious and self-confident, she rejected their advances. Though her father supported her in this, there was an understanding that in order to protect herself from ill-suited men, like her 50 year old great-uncle, she would have to marry someone rather soon. Knowing this, at 14 she accepted the match to one Antoine Lavoisier who was only 28. Lavoisier was a colleague of her father’s in the pre-Revolutionary office, the “Ferme générale”, the most hated tax collectors of the crown. Antoine Lavoisier, by chance, was also one of the great revolutionaries of chemistry, credited with the discovery of the function of oxygen in combustion.   Marie-Anne Lavoisier was the one who arranged her husband’s laboratory life, of which she was an active participant. She was fascinated by his research from the start and helped with his endeavors, detailing his equipment and chronicling the processes of his chemistry experiments..     Her sketching was not simply secretarial work for her husband, nor was her art a hobby she did in her spare time. But rather it was the work of a skilled and talented artist. While Antoine Lavoisier worked his day job at the “Ferme générale”, Madame Lavoisier studied under the tutelage of renowned painter Jaque-Louis David, the man who would become the portrait painter of Emperor Bonaparte. Madame Lavoisier cultivated her talents of art, languages, and science with equal fervor, translating scientific texts from English to French, all of which were part and parcel of the chemistry breakthroughs Antoine Lavoisier came to in the 1770s. However, after the Revolution and the start of the Reign of Terror in France, Marie-Anne’s family suffered greatly and it seemed everything she had worked for with her husband had fallen apart. In 1794 Antoine Lavoisier and Messer Paulze, Marie-Anne’s father, were guillotined. All her possessions were confiscated, including the books and journals in which she and her husband documented their experiments. She herself was imprisoned for 65 days after her husband’s execution. After her release she continued to write protest letters, demanding the return of her books. Her efforts were not in vain and she eventually got back everything the authorities confiscated in the name of the Revolution. She went on to publish Antoine Lavoisier’s final writings on chemistry in 1805 under the title, “Mémoires de physique et de chimie” (Memories of Physics and Chemistry) – thus keeping the scientific Revolution alive.   This article was written with the generous help of Chaya Meier Herr, curator of the Edelstein Collection at the National Library of Israel.