I Bet You Didn’t Know Captain America was a Golem!

Home > Antisemitism > I Bet You Didn’t Know Captain America was a Golem!
Diaspora

The very public Jewish roots of Captain America, the first superhero to punch Hitler in the face! 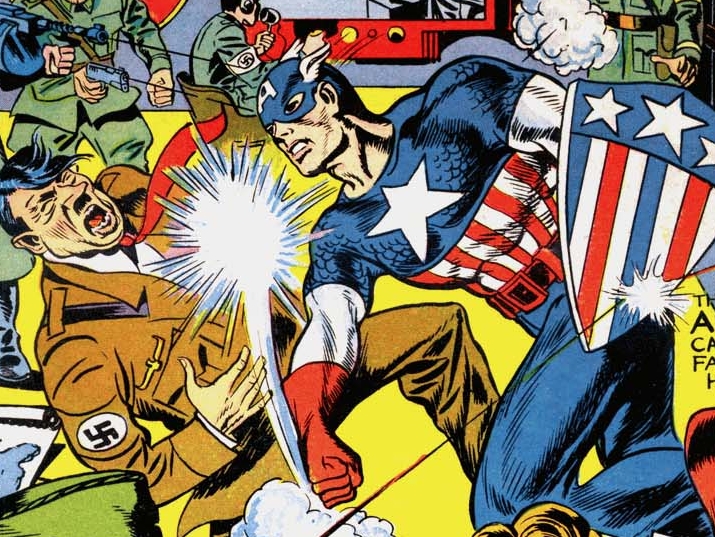 “Captain America was me, and I was Captain America.  I saw him as part of me, and he always will be.  In the fight scenes, when Cap used to take on seven men at once, and five bodies would fly around the room while he punched two in the jaw — that’s how I remember the street fights from my childhood.”

Once upon a time, in the city of New York, two young mentches created a comic book the world had never seen before. It was March 1941 and Captain America was giving Hitler a proper right hook, right in the kisser!

Captain America was probably the first truly political superhero, taking a stance against Hitler and Nazism. The Jewish background of his creators, Jack Kirby (born Jacob Kurzberg) and Joe Simon (born Hymie Simon), directly influenced the character and the original plot of the Nazi-punching hero.

They were both second generation Americans, their parents having come from Europe and brought with them the traditions and folklore of the Jewish communities who left their homes behind; seeking out a new life and new opportunities in America. It’s very likely that their families imagined that in this new country, they would not have to deal with the persecution and antisemitism that plagued Jewish people in Europe for centuries.

But antisemitism was all too common in America of the 1930s. After Hitler’s rise to power in Germany in 1933, groups like the German-American Bund (Amerikadeutscher Bund), an American group made up exclusively of German immigrants and German-Americans, worked to promote a favorable view of Germany, Hitler, and Nazism. They were, of course, outspokenly antisemitic.

“Jewish kids then were raised with a belief in moral values.  In the movies, good always triumphed over evil.  Underneath all of the sophistication of modern comics, all the twists and psychological drama, good triumphs over evil.”

When Germany invaded Poland on September 1st, 1939, and the war broke out, the United States kept its isolationist strategy as long as it could. It was at this time that Jack Kirby and Joe Simon, already successful animation and cartoon writers and artists, began to develop a character; a character who would be a savior for the Jewish people persecuted by the Nazis and would fight against the Nazi war machine, aiming to conquer Europe and the world.

Captain America #1 was published eight months before the Japanese attack on Pearl Harbor, the event which ushered in American participation in the war on the side of the Allies. By then, Captain America was a Nazi-fighting veteran.

The patriotic concept of Captain America is clear from the name and the colors of the American flag that make up his costume. And in many ways, Kirby and Simon intended for the hero to be All-American and unifying in the face of an enemy that was dangerous to the world at large. However, the Jewish signifiers crept in, some intentional and some very likely unconscious.

Captain America’s alter ego, Steve Rogers, was born on the Lower East Side of Manhattan, a well-known Jewish enclave from the late 19th-century and well into the 1940s and 1950s. When Steve Rogers attempts to get drafted into the US Army in order to go fight the Nazis in Europe, he is rejected time and again for health reasons. But Doctor Reinstein (an analogue for Albert Einstein, already a cultural icon of the time) taps Rogers for a special project in which he injects the frail patriot with “Super-Serum” that gives him health, strength, and agility; making Rogers the pinnacle of human ability and a super-soldier able to fight the Nazis practically single handed.

“Those are the things I learned from my parents and from the Bible.  It’s part of my Jewish heritage.”

The analogy between Captain America and the Golem from Prague is clear when you look at the parallels. The Golem itself can be read as a precursor of superhero stories, a creature created for the protection of a community in peril. Like the Golem of the 16th-century, the frail Steve Rogers is the raw material needed in order to create a hero that will drive the persecutors of Jews away in fear.

In the 20th-century they were Hitler and the Nazis. The Golem is animated by the letters אמת spelling out the word “Truth” in Hebrew. The letter emblazoned on Captain America’s mask is “A” obviously for America, but the Hebrew letter א is analogous to the English letter A. Captain America’s weapon of choice is the shield, bringing to mind the Shield of David, that is, the Magen David. The modern interpretations of the Golem contain a star on his chest, just like Captain America.

For more information about the Jewish roots of Captain America:

“Up, Up, And Oy Vey! How Jewish History, Culture, and Values Shaped the Comic Book Superhero” by Simcha Weinstein, Leviathan Press, 2006

The quotes from Jack Kirby are from “Secret Identities: Jewish Comic-Book Creators” by Michael Weiss, http://bit.ly/2wmqYKA, 1995