Discovered in the National Library archives, Himmler's message to the Mufti decried the "Jewish invaders", while sending “warm wishes for your continued struggle..." 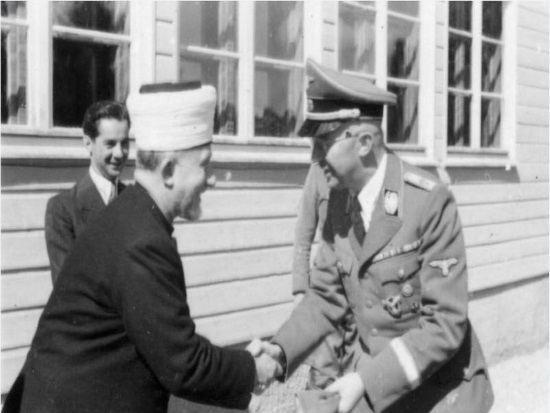 The Mufti and Heinrich Himmler meeting in 1943. Photo: Albert Kurt

To the Grand Mufti Amin al-Husseini,

The National-Socialist Movement of the Greater German Reich has since its inception upheld the fight against World Jewry.

It is for this reason that it closely follows the struggle of the freedom-seeking Arabs – and particularly in Palestine – against the Jewish invaders.

The common recognition of the enemy and the joint struggle against it is what creates the firm foundation between Germany and freedom-seeking Muslims around the world.

In this spirit, I am pleased to convey to you, on the anniversary of the execrable Balfour Declaration, warm wishes for your continued struggle until the great victory. 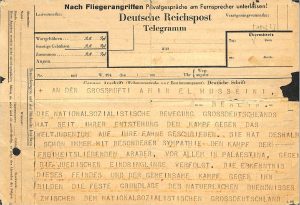 In 1937 the authorities of the British Mandate for Palestine sought to arrest the Mufti due to his involvement in the Arab Uprising. In response, the Mufti fled the country to Lebanon, and from there to Iraq, where he stayed for some two years. In Iraq he joined a pro-Nazi group led by Rashid Ali al-Kaylani which rebelled against the monarchic regime and carried out a military coup in April of 1941, which lasted for only two months until British forces reached the outskirts of Baghdad. Kaylani and the Mufti fled through Iran to Italy and from there to Nazi Germany. The Mufti reached Berlin in November 1941.

The German Wehrmacht’s astonishing string of victories convinced the Mufti that he must secure a meeting with Adolph Hitler, the Fuhrer of the now enormous Nazi Reich. During the 90-minute meeting between Hitler and the Mufti, the latter strove to present himself not just as leader of the Palestinian national movement, but as a leader of the Arabs in general, and even as the representative of all Muslims.

As a member of the “Muslim Brotherhood” movement, the Mufti believed in pan-Islamic unity and in the struggle to liberate Arab peoples from the yoke of colonial powers like Britain and France. In Germany he labored to obtain a declaration of Nazi support for the independence of Arab countries and support for the expulsion of Britain and France from the Middle East. He saw his fight against Zionism as one facet of his struggle against European colonialism, which also coincided with his personal virulent antisemitism – views he strove to disseminate during his years in Germany through Radio Berlin broadcasts in Arabic.

As part of his war against Zionism, the Mufti marked the anniversary of the Balfour Declaration (Nov. 2nd) as a major annual day of protest because he realized that only through diplomatic recognition from the world’s powers could Zionism achieve its aim of a Jewish state in the Land of Israel. Out of deep fear that the ongoing annihilation of Jews in Europe would lead those who escaped to Palestine, the Mufti sought to receive assurances from the heads of the Nazi regime that no Jew would be sent there.

The above telegram, which was recently discovered in the archives of the National Library, and is apparently dated to 1943, includes a promise by Heinrich Himmler – one of the architects of the “final solution” – that “Nazi Germany will stand by the Arab people in Palestine in their struggle against the ‘miserable’ Balfour Declaration.

“In the end,” says historian Dr. Esther Webman of Tel Aviv University, “the Mufti failed to achieve most of his aims. Nazi Germany did not declare its support for the idea of Arab independence and the Nazi leadership merely used him to achieve its own goals. His attempts to foment rebellion by the Arabs of the Middle East against the colonial regimes during World War II were unsuccessful. His only meaningful achievement was to succeed in preventing a few cases of Jews departing Europe for Palestine during the war.”

Written with the kind assistance of Dr. Esther Webman, senior research fellow at the Dayan Center and head of the Zeev Vered Desk for the Study of Tolerance and Intolerance.