A Rare Find: The Prayers, News and Blessings Concealed Within the Pages of Visitors’ Books from Rachel’s Tomb

Home > Jewish Manuscripts > A Rare Find: The Prayers, News and Blessings Concealed Within the Pages of Visitors’ Books from Rachel’s Tomb
Judaism

The difficulty of daily life in the Jewish Yishuv, coping with the Holocaust and the breakout of the War of Independence revealed. 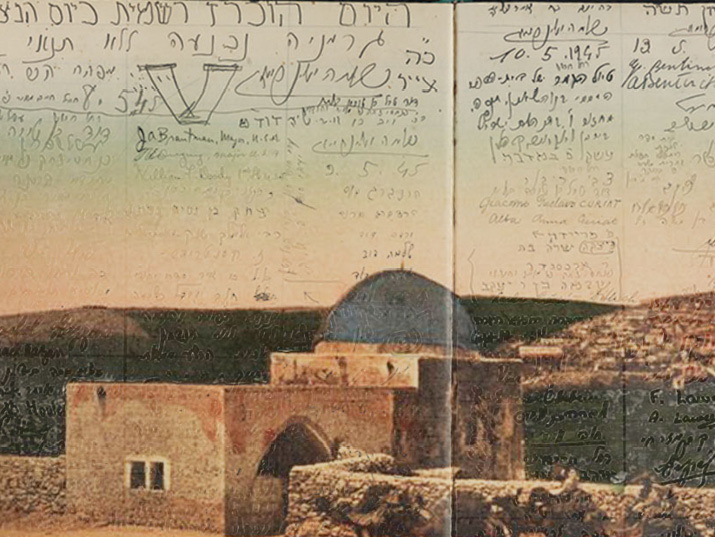 Every morning, except for Sabbath and festivals, Shlomo Eliyahu would board bus no. 22 from Jaffa Gate in Jerusalem and arrive at Rachel’s Tomb at around nine o’clock in the morning. Armed with a pistol out of fear of attacks from the local Arabs, he would open the entrance door with his long iron key and receive the visitors who came to pray at the Tomb. This was relatively novel in comparison to his predecessors: in their time, the Tomb was open to visitors mainly during the month of Elul and during the festival period.

There is Hope for your Future

And they journeyed from Beth el, and there was still some distance to come to Efrata,  and Rachel gave birth, and her labor was difficult.  It came to pass when she had such difficulty giving birth, that the midwife said to her,  “Do not be afraid, for this one, too, is a son for you.” And it came to pass, when her soul departed for she died that she named him Ben oni,  but his father called him Benjamin. So Rachel died, and she was buried on the road to Efrata, which is Bethlehem.  And Jacob erected a monument on her grave; that is the tombstone of Rachel until this day. (Genesis 35, verses 16-20 – English translation from www.chabad.org)
Get our best stories in your inbox:
Subscribe


Fifty eight words in the original Hebrew. Five verses. One of the most tragic events of the book of Genesis is told with familiar Biblical brevity: On the way to the house of Isaac, the father of her beloved husband, Rachel gives birth to her second son and dies in childbirth. She did not even hear her child’s (final) name – Benjamin.

The tragedy of Rachel’s death is intensified by the fact that Jacob’s voice is unheard. What did he feel? What did he do? The Bible does not provide details. The only tears to fall in the Bible are those of Rachel herself. In the book of Jeremiah, the third matriarch is mentioned as one weeping for her children’s fate: “So says the Lord: A voice is heard on high, lamentation, bitter weeping, Rachel weeping for her children, she refuses to be comforted for her children for they are not. So says the Lord: Refrain your voice from weeping and your eyes from tears, for there is reward for your work, says the Lord, and they shall come back from the land of the enemy. And there is hope for your future, says the Lord, and the children shall return to their own border” (Jeremiah 31: 15-17 – English translation from www.chabad.org).

It is this image of Rachel which has been preserved through the generations: the mother who prayed for her children throughout her life continues to worry about them after her death. So too the traditional place of Rachel’s burial is perceived as a place of prayers and pleading for the sons and daughters of the  “tearful mother”s .

The Last Caretaker of Rachel’s Tomb

Shlomo Eliyahu inherited the position of Ashkenazi caretaker of Rachel’s Tomb from his father, Yaakov “Yankele HaShamash” Freiman, who served as caretaker for only two short years until his death in 1918. Shlomo Eliyahu had a lot to live up to and he was determined to fulfill the mission he had received.

From as soon as he began his role until it ended under tragic circumstances 29 years later, Shlomo Eliyahu conducted a daily record of the events at the Tomb in the visitors’ journal. The National Library of Israel recently received the last two surviving volumes of the visitors’ journal, out of 24 that are known to have existed. The period they relate to is a crucial period in Jewish history and that of the “State in the making” – the third and fourth decade of the 20th century.

What is in the Journal?

The visitors’ journals were arranged in chronological order on a wooden shelf in the room where Rachel’s tombstone is situated. Most of the journals’ pages are full of the names of the various visitors. The many visitors and the varied places they came from show the significance of Rachel’s Tomb, not only to the Jews of Israel and the Diaspora, but also to the many Christian visitors – some of them pilgrims, others soldiers in the allied forces or commanders in the British Mandate. There were visitors who did not suffice with simply writing their names, and added requests from “Mama Rachel”.

Most of the names are unfamiliar to a modern day reader of the journals; others will immediately conjure up images of key figures in the Jewish settlement and in the future State of Israel: Dr. David Yellin, Rachel Yanait Ben-Zvi, Henrietta Szold, and even a 7 year old Ezer Weizmann who came to visit together with his mother Yehudit and his sister Yael.

The anonymous visitors are objects of greater interest: What became of Rachel Frank from Lithuania who visited in 1932, a decade before the Holocaust? Was the couple Esther and Rachamim’s dream to have children fulfilled? Who were the visitors from Persia – new immigrants or tourists who returned to their native country? Each page brings more and more questions.

Eliyahu Freiman made slightly different use of the journals: dozens, and perhaps hundreds of his comments and observations in the two journals provide a more in-depth glimpse into the impact of the dramatic events in the Land of Israel and Europe on the Tomb’s activities. For him, the journals were a way to document the daily activity at the Tomb and his impression of the various visitors. They served as an account of the renovations and repairs, which Freiman himself (usually) carried out, out of fear of the Arab workers, and contain a description of his tense relationship with the local Arabs while mentioning the dramatic events taking place in the world.

From 1940 onward, the terrifying descriptions of the Second World War and the decimation of the Jews take a central place in the journal. As well as the emotional pleas for help to which Freiman was accustomed. The Holocaust, which the Jewish people was enduring, awakened criticism of “Mama Rachel” as abandoning her sons and daughters.

It is doubtful that Freiman, or any of the visitors at the Tomb, were aware of the extent of the destruction taking place in Europe. Nonetheless, prayers for the salvation of the Jews “who are in danger of destruction” began to fill the journal’s pages. A fixed wording appears in the journal almost daily: a group of Jews comes to the Tomb, and they pray for the welfare of their brethren in occupied territory. One of the detailed examples is on the page dated April 5, 1943. On this day, Freiman notes there was a mass prayer of “several thousand visitors, including schools from throughout the country and several hundred soldiers”. Due to the crowdedness “there were several hours when it was impossible to visit inside due to the multitudes who stood and prayed.” In this emotional prayer “the cries and weeping…were unnatural.” The sights and things said in the Tomb were so disturbing that “several people fainted in distress upon hearing details of the anguish of our brethren who are suffering in the occupied countries.”

A few days before the end of the War, on April 26, 1945, Freiman records a touching event which took place, when “an historical parokhet [curtain for a Holy Ark] which was preserved from several dozens of synagogues in Poland from the time of the riots which took place in several cities, and still has blood stains on it” was brought to the Tomb. It can be assumed that the parokhet was brought to the Tomb in the early days of the War, as the Freiman family brought the parokhet to the Tomb for several years “And now, on the 14th of Iyar 5705 [April 26, 1945], it was mended and brought once again as a memorial in the holy place.”

Five days before the German surrender, on May 3, 1945, Freiman began the victory celebrations by drawing a large ‘V’ on page 314 of the diary. On the next page he wrote in large letters, perhaps in a very emotional state, the words: “Germany surrendered unconditionally, the war in Europe has ended, today was officially declared Victory Day”.

Frieman dedicated the following two pages to writing a blessing of thanksgiving for victory day and a prayer of thanks. The victory celebrations continue at the top of the next page as well.

Rachel’s Tomb as the Arena of the National Struggle

Even though many of the visitors expressed concern for the survival of the European and North African Jews during the Holocaust, Freiman dedicated the lion’s share of his writing in the journal to the Jewish-Arab battle around Rachel’s Tomb. Even some of his most banal reports contain expressions of the escalating battle around Rachel’s Tomb. Freiman, who tried to remain on warm terms with the local Arabs as much as possible, found himself, together with them, in an impossible situation. He tried to help his Arab neighbors whenever they approached him for help, but never denied his identification with the Zionist mission and the nation to which he belonged.

When the time came to carry out repairs and renovations in the ancient building, Freiman and his Sephardi counterpart were forced to do the work themselves, out of concern of creating a precedent supporting employment of Arab workers on the site.

Throughout his years as caretaker, Freiman was concerned that the Mufti and the Waqf would attempt to take control of the site by creating small de facto precedents. On March 26, 1936, the secretary of the Mandate government came for a visit and ordered the caretakers to file a report about the tensions with the local Arabs.

As the years passed, even the most encouraging visits turned sour. When a number of Arabs came to ask for water during Passover of 1940, they told him that they want “the Arabs and the Jews to live in peace”, and did not forget to mention that “the situation is very bad for them because they are not gaining.”

In 1946, a pipe bomb was thrown on Freiman and two Arab neighbors who he was spending time with. This was an omen of what was to come. As the security situation in the Land of Israel became increasingly unstable, and with the mutual preparations for war, the feeling of security at Rachel’s Tomb was lost.

In one of the last entries in the journal, Freiman copied the letter which he sent to the National Committee in March 1947, in which he informs them about the worrying developments: the appointment of an Arab guard by the Waqf. Ibn Hassan, the guard stationed in the nearby cemetery, antagonized the two caretakers and told the local Arabs that he is the guard of the Tomb. Whenever Ibn Hassan dared approach Freiman and threaten him with commands, Freiman made clear to the National Committee, “I shout at him and he leaves immediately”.

A few days after the U.N. vote on the Partition Plan, Freiman arrived at the Tomb and prepared it as if it was a regular day. The tremendous tension in the area eventually convinced him that he should pack up his belongings and leave. He did so, not before giving the journals to an Arab sheikh who lived nearby. This was last time he saw Rachel’s Tomb.

The two journals belong to an anonymous donor who chose to give them over to the National Library of Israel for safekeeping.