Hava Nagilah – The Birth of a Song

The story of ecstasy that produced the most famous Jewish song in the world. 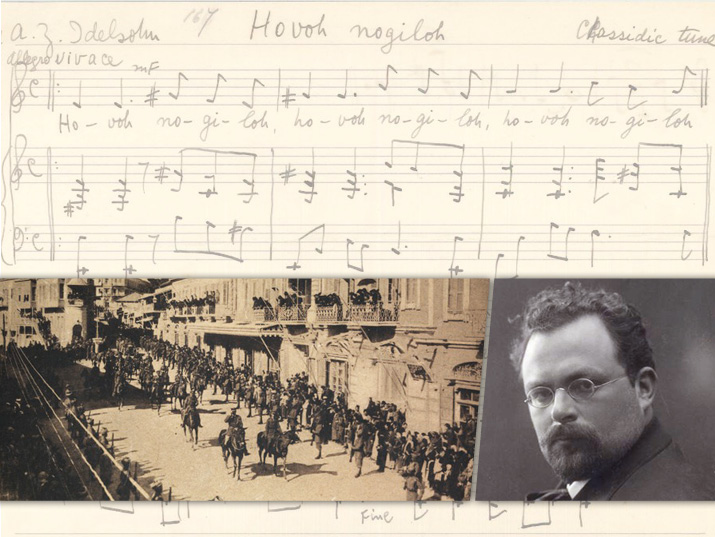 General Allenby entering Jerusalem, and the famous song inspired by the event

During the First World War, the small Jewish settlement in the Land of Israel experienced a series of tragedies which threatened its very survival. The residents of Jaffa and Tel Aviv were expelled from their homes, export to Europe – the new settlement’s source of financial support – was completely ceased, and the threat of a repeat of genocide to the Jews of the Israel seemed more and more like a practical reality. There were very few reasons for happiness and rejoicing during that time, but this was all soon going to change.

The arrival of the British forces in the Land of Israel in late 1917 was the development which led to cautious hope in the hearts of many people in the Jewish Yishuv and throughout the Jewish world. There were those who translated this hope into bold deeds: the N.I.L.I network led by the Aaronsohn brothers and their friend Avshalom Feinberg who acted against Ottoman-ruled Palestine, others in the Jewish world in Europe and the USA enlisted in the British army. There were those who chose to exploit their natural talents to encourage the armed forces, and as soon as the British fight to capture the Land of Israel ended – to celebrate the new state of affairs.

The researcher, composer and music teacher Avraham Zvi Idelsohn belonged to the latter group. Idelsohn may have encountered General Allenby’s name for the first time when hearing about the victories in his glorious campaign of conquests throughout the Land of Israel but, this did not prevent him from being swept away by the waves of enthusiasm which flooded his city of Jerusalem with the two great tidings of 1917 – the Balfour Declaration on November 2 and the surrender of Jerusalem to the British on December 9.

The musicologist Eliyahu HaCohen fills in details about the writing of the song Hava Nagilah: “When they began to celebrate the day of redemption in Jerusalem, all eyes turned to Idelsohn, in the hope he would provide the ultimate song to express the events and the public emotion” (quoted from: Eliyahu HaCohen, ‘The First Ten Years: From the Songs of Jerusalem at the Beginning of the Mandate Period, 1918-1928’, Jerusalem During the Mandate Period: Activity and Heritage, 2003, pp. 480-481).

Avraham Zvi Idelsohn was a great researcher and scholar of Jewish music.  Idelsohn published ten volumes of tunes which he compiled from the various musical traditions under the title “Otzar Neginot Yisrael”, the first five volumes of which were dedicated to the Jews from the East and the remaining five volumes to the music of European Jewry. The original tune appears in the tenth volume of the “Otzar” of Hassidic tunes which was only published in 1932, but was written years earlier. The original tune is number 155, but in the song Idelsohn switched the parts of the tune.

Idelsohn was also a cantor, music teacher and composer. He was an avid Zionist and wanted to create Israeli music based on traditional Jewish music. So, consciously or unconsciously, he grafted the words “Hava Nagilah” “Uru Achim” onto the Hassidic niggun he had heard from Hassidim.

As a researcher of Jewish music responsible for the revival of the Jewish source in the age of Zionist renewal, Idelsohn chose, instead of composing a completely new tune, to graft new words onto an old Hassidic niggun which he most likely heard in the ‘Tiferet Yisrael’ synagogue of Sadigura Hassidim in Jerusalem as early as 1915. Eliyahu HaCohen suggests two accounts of the manner the words of the song were composed – either Idelsohn alone or with the help of his students in the Lemel School in Jerusalem. Either way, the new words hint to verse 24 of chapter 118 of the book of Psalms, “This is the day God made, let us rejoice and exult in it’.

Awaken my brothers with a glad heart.