Rare Album: The Machine Gun Squadron Soldier Documents the Conquest of the Land of Israel

We have an original copy of the 20th Machine Gun Squadron soldier's journal from the First World War. 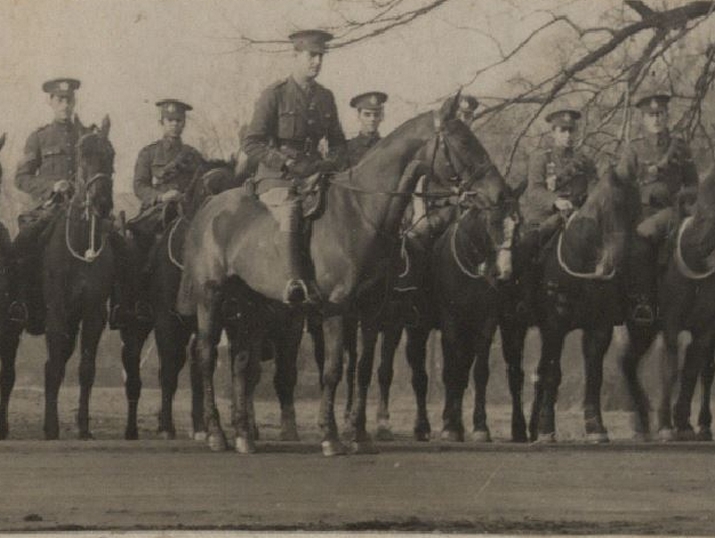 While founding the 20th Machine Gun Squadron on July 4, 1917, its commanders found themselves dealing with an unexpected obstacle: only 30 of the squadron’s 121 soldiers had been trained to operate the latest weapons. The other soldiers had never been stationed in such a unit.

The impending battle to conquer the Land of Israel left no time for unnecessary delays, and a new order received several days before gave the soldiers of the new squadron a glimpse into the tremendous challenge that awaited them. On August 12, a month after its establishment, the squadron set out for the new military front: The Land of Israel.

The story of the squadron was documented in the book “Through Palestine with the 20th Machine Gun Squadron”, ​which was handed out to members of the unit after the war. One of the soldiers decided to stick photographs he took during the squadron’s trek through the Land of Israel.

The fascinating story of the squadron as documented through the eyes of one of its soldiers is preserved in the National Library.

Under the fierce sun, with aching shoulders, and constant fear of depletion of the daily water ration, the squadron’s warriors spent 18 days traversing the Sinai desert. They took advantage of their stay in the British camp to continue the drills – they spent half a day practicing operating the weapons which were new to most of them, and the second half of the day – on horse riding.

The soldiers encountered their first battle as a squadron seven miles south of the city of Be’er Sheba. With reinforcements on their left and the Australian units on their right, the solders of the machine gun squadron attacked the terrifying trenches the Ottomans had dug in the road leading to the city: the attackers and defenders fought the entire morning and afternoon.

The dust that flew in all directions inhibited both sides from seeing more than a few meters in front of them. After several hours of fighting, the soldiers discovered, to their utter dismay, that the Ottomans had retreated to the city. The order arrived at four in the afternoon: attack Be’er Sheba, which also proved to be deserted of enemy troops.

“Be’er Sheba”, the soldiers wrote in the squadron book, “was extremely disappointing. It is barely a village in the way Europeans understand the term – a place one can buy cigarettes and something to eat; there was nothing to be found, and the only buildings in it which were not wooden huts were deserted.” When the soldiers toured around the area they were unimpressed by the arid desert which surrounded them, and by the lack of traversable roads.

The soldiers also reached Gaza after the Ottomans retreated from the city – This is not mentioned anywhere in the book, but it’s likely that the soldiers didn’t take part in the hard battles to conquer Gaza. Despite the short distance from Be’er Sheba, they encountered a different type of settlement – roadside villages, populated by farmers who worked their lands. As they approached they discovered a horrifying sight: dirt and refuse, men resting while the women did the hard work. The soldiers found nothing positive to say about this city either.

The soldiers continued from Gaza to Ramallah, from Ramallah to the Arab village of Qezaze, from there they followed the train tracks to Jerusalem. The enemy soldiers predicted this path of advance and dug trenches along the way. The fierce battles led to a series of casualties. The squadron’s commanders decided to retreat and re-organize in the Jaffa area. On their way to Jaffa, the soldiers came across Rehovot for the first time.

Rehovot reminded the soldiers of the life they had left behind in Britain.  The soldiers met the Zionist settlers and bought sacks full of juicy Jaffa oranges from them. Anyone who did not have enough money with them bartered for the preserved meat they received from the squadron. The meeting with the Jewish settlers excited the soldiers, who regarded them as the beginning of the rebuilding of the Jewish nation.

After a short rest, the soldiers advanced on Jerusalem once again. The Ottoman defenders were aware of the importance of the holy city: they sent most of the forces stationed in the Land of Israel to defend the road to Jerusalem. With every additional meter the soldiers of the Machine Gun Squadron managed to capture from the enemy, the warriors’ focal effort was to station the terrifying artillery machines at the highest place in the battle zone. They took advantage of every gain they managed to achieve: coverage from other units, use of snipers, silent advance at night or – when there was no other option – firing burning fire on the enemy to force them to flee from the position they had taken up.

Thus, on December 8, 1917, despite the defective roads, the constant lack of water and Ottoman and German opposition along the way, the soldiers of the Machine Gun Squadron, together with Allenby’s other forces, managed to open the road to Jerusalem.

More than four hundred years of Ottoman rule in the Holy Land came to an end a day later, with the surrender of the city of Jerusalem. The date was merely symbolic, as most of northern Israel was still under Ottoman rule, which disintegrated in the following months.

“How wondrous,” declared the emotional soldiers who finally beheld the city of Jerusalem. The holy city was freed on the eve of the festival of Hanukah, and as the Ottomans fled from Jerusalem, the Jews celebrated the historical victory of the Maccabees over the ancient Greek conquers.

The squadron lost 3 commanders and 67 soldiers during the conquest of the Land of Israel.