Home > Haggadah > What Would You Serve at a Passover Seder During the Korean War?
Diaspora

The soldiers who participated in Operation Matzo were probably grateful both for the welcoming service and for the food that reminded them of home. 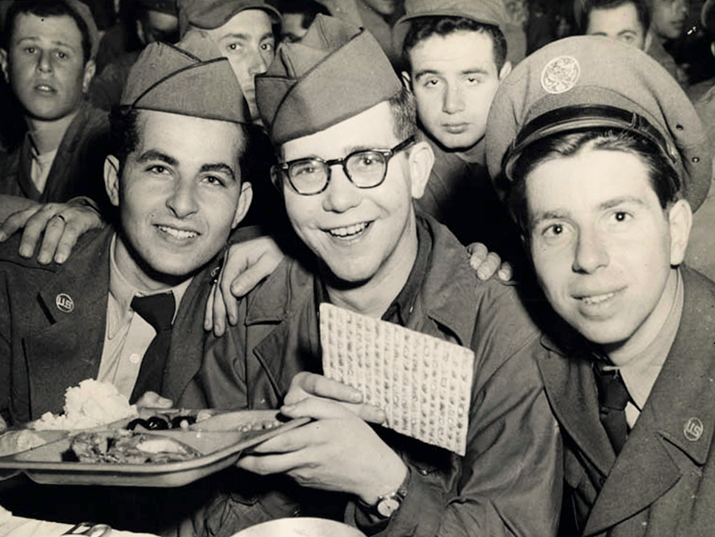 If you were hosting six hundred people at a Seder during the Korean War, what would you serve for the Seder meal? According to a menu that appears in a Haggadah printed for American troops in Korea in 1952, the correct answer is matzah, kosher wine, gefilte fish, chicken soup with kneidlach (matzah balls), and finally, macaroons for dessert.

It’s not so hard to imagine the challenges in providing an elaborate, traditional Jewish meal to hundreds of soldiers in the middle of a remote war zone. This festive meal was made possible by a coordinated effort of Jews and gentiles, soldiers and civilians, and people on both sides of the Pacific Ocean.

The Chaplains: The Seder was organized and officiated by two Jewish chaplains, who also were the authors of the Haggadah. Herbert Chanan Brichto, a recently ordained Reform rabbi who began his rabbinic career as a chaplain in Korea, dubbed their efforts “Operation Matzo.” His colleague, Harry Z. Schreiner, also a Reform rabbi, had served in two congregations before becoming a chaplain. Schreiner would go on to an illustrious career in the military, receiving several awards for his service. But in a 1951 interview with a Jewish newspaper, he proudly reported that he had become “the biggest scrounger in Korea”, which was probably his most relevant skill for this particular operation.

The Jewish Organization: Back home in the United States, this Seder was business as usual for the Jewish Welfare Board (JWB), founded in 1917 to serve Jews in the military. According to a JWB document from World War II, the organization had already sent supplies and educational materials to chaplains organizing Seders in dozens of countries all over the world, many of them large-scale events.

The General: The Seder efforts enjoyed the full support of the United States Army, which has a policy of accommodating the diverse religious needs of its troops. The US Army granted Jewish soldiers time off for the celebration, moved army operations out of the abandoned schoolhouse in Seoul that the chaplains chose as the location for their Seder, and transported the soldiers from all over Korea to that location. But they also showed their encouragement in ways that went well beyond mere accommodation. The Haggadah begins with two pages of Passover greetings from the top military brass stationed in Korea. Many high ranking officers also attended the Seder. 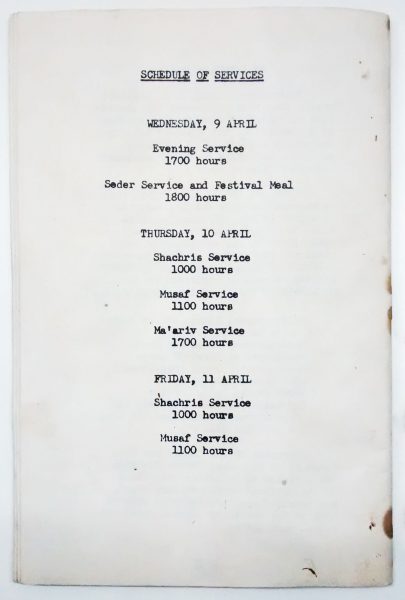 It’s possible that some of these enthusiastically supportive officers felt a connection between Passover as a holiday of freedom and their larger mission in the Korean War. The Korean War (1950-1953), in which American and other troops helped South Korea repel an invasion by Communist North Korea, was seen by Americans as part of a global struggle against Communism – a fight for values of democracy and freedom.

The highest ranking officer to attend the Seder was General F.F. Everest, the commanding general of the US Fifth Air Force, who delivered an address to the soldiers as part of the festivities. We have no record of what he said at the Seder, but in his greetings inside the Haggadah he wrote:

Even as the Ancient Hebrew people answered the call of freedom symbolized by Passover, we too must heed its voice and stand fast in preserving freedom’s principles for the world of our time.

The Haggadah compiled for this event by Rabbis Brichto and Schreiner is the only Haggadah in the National Library of Israel’s vast Haggadah collection to be written and published in Korea. The 32-page booklet contains photo offsets of Haggadah texts from other Haggadot, but there are also various songs and dedications typed in by the chaplains. The Haggadah’s cover is decorated with hand-drawn insignias of the main military units involved in the Seder, with the insignia of the Jewish chaplaincy in the middle. A schedule printed on the back mentions only one Seder on the first night but shows that prayer services took place for three days, from Passover Eve until the second day of the holiday.

Preparing a Haggadah in Korea must not have been simple: a page in which the Hebrew text appears upside down illustrates the challenges of working with local printers who were not familiar with Jewish text. However, in his recollections in the 1962 book “Rabbis in Uniform,” Brichto describes the Seder, and the Haggadah, as a great success:

The Seder began with the Cantor’s magnificent rendition of the Kiddush. Thanks to the Haggadah which we had specifically prepared and published in Korea, the service was smooth, dignified, and inspiring. Although the power failed, the service continued without interruption. From the stage we were awed by the sight of that huge auditorium, extending almost without end in all directions, ablaze with the light of thousands of candles.

The Korean Haggadah is designed to appeal to soldiers from a variety of Jewish backgrounds. While some prayers and songs, such as the Kiddush at the beginning, appear in the original Hebrew, the bulk of the readings and many of the prayers are in English. The chaplains typed in popular Hebrew Seder songs transliterated into English so everyone could join in.

The soldiers who participated in Operation Matzo were probably grateful both for the welcoming service and for the food that reminded them of home. But like so many Seders, often the most special part is the opportunity to be with family. Brichto recalls:

There were many highlights to this first Seder, not the least being the superb meal… but the heartwarming scenes were the reunions. Captain Dunn of the 45th division came up to the platform to ask that an announcement be made, “Is Captain Dunn’s brother here tonight?” Came the ecstatic answer from the rear of the auditorium, “Here I am, Jimmy!” And there were other equally moving reunions. Brother met brother and uncle found nephew at that Passover Seder in Korea.

If you liked this article, try these: Celebrating the Exodus from Egypt Behind the Lines of World War I The Benghazi Haggadah: How the Jews of Libya Celebrated Victory Over the Nazis Forget Google Maps! To Get Out of Egypt, These Are the Maps You Need!