The Jewish Woman Who Gave Life to Lady Liberty

In 1883 Lazarus wrote the poem that greets new immigrants to America till this very day. 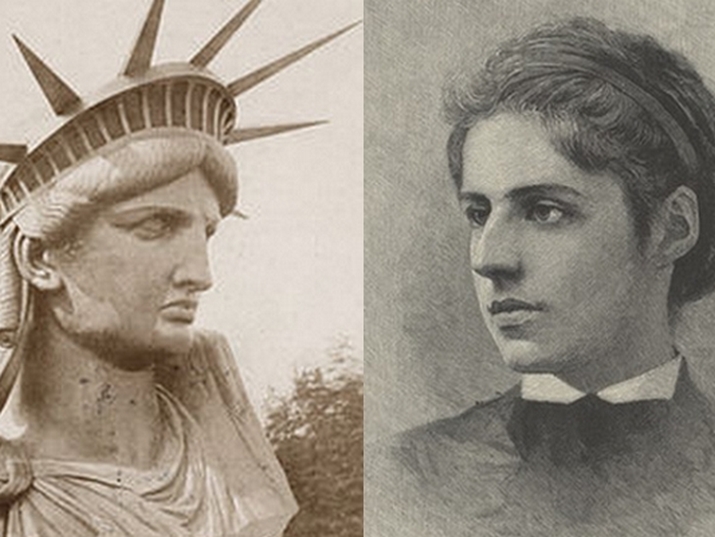 The 1880s were years of pogroms in Tsarist Russia, giving cause for hundreds of Jews to flee Eastern Europe to the shores of America. With the arrival of the refugees, Emma Lazarus, the Jewish-American poet, felt the call to action and to aid her fellow Jews.

​Emma Lazarus’ poetry was encouraged early on by her father, Moses Lazarus, who recognized her immense talent as a teenager. Moses Lazarus even published Emma’s first book privately, “Poems and Translations Written Between the Ages of Fourteen and Seventeen,” in 1867. This was the beginning of Emma’s illustrious writing career.

She was recognized in her time for her poetry, mentored by Ralph Waldo Emerson from the late 1860s, who encouraged her great potential. This recognition and recommendation propelled her to fame and she was soon running in the elite literary and artistic circles of New York.

Suffice to say the majority of her friends in the art world were Christian. As such, her Judaism was often referenced and remarked upon by her gentile peers. It marked her difference among them.

The undercurrent of anti-Semitism among the wealthy elite was always there, but it became more pronounced with the arrival of the Jewish immigrants from Eastern Europe in the 1880s.

In 1881 when the vicious pogroms struck the Jewish communities of Russia, causing them to flee to America, the anti-immigrant and anti-Semitic backlash did not leave Emma untouched.

The Jewish themes she had never dealt with before erupted in her work. She published “Songs of a Semite” in 1882. In this collection she wrote of Maccabees calling for Jews to rally together in Jerusalem. She also translated poems from the Golden Age of Spain, celebrating her Sephardic roots. She wrote a play “The Dance to Death,” which she dedicated to George Eliot. It is a tragedy in which the raw ideas of Jewish Nationalism are fostered, written well over a decade before Herzl published his vision of Zionism.

But her most famous poem would be published a year later, in 1883.

“The New Colossus”, the poem emblazoned upon Lady Liberty herself, was published for an art auction aimed at constructing the Statue of Liberty. The statue was a gift from France to the United States, as a monument to the shared values between the two republics, chief among them, freedom and equality.

Emma Lazarus, seeing the suffering of her fellow Jews fleeing the Old World, conceived of a monument welcoming her people to the new world. She envisioned their suffering and their stifled existence. She wanted Lady Liberty to watch over the ships coming into a safe harbor, protecting those escaping the dangers that chased them out Europe.

“Keep, ancient lands, your storied pomp!” cries she
With silent lips. “Give me your tired, your poor,
Your huddled masses yearning to breathe free,
The wretched refuse of your teeming shore.
Send these, the homeless, tempest-tost to me,
I lift my lamp beside the golden door!”

With those words, the Statue of Liberty was given life and purpose beyond that of a monument to liberal ideals, becoming a beacon of hope for the refugees seeking freedom from the terror of persecution.

The poem was placed on the Statue of Liberty in 1903.