‘Toyve the Black Cantor’ and His 1930 World Tour

When celebrated African-American Yiddish soloist Thomas Larue crossed the Atlantic, he didn't know what was in store... 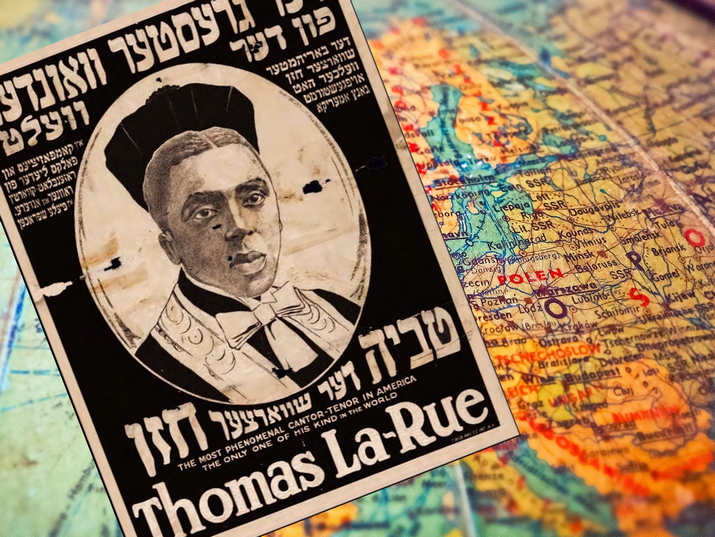 Billed as "The greatest wonder in the world", reactions to LaRue's appearances in Europe varied greatly (Poster image source: The YIVO Institute for Jewish Research)

Edvin Relkin the 50 year-old promoter of the provocative and attention-grabbing LaRue world tour, worked his way up from a childhood as a Yiddish theater candy butcher to become a leading director. The audacious tour idea seemed to offer unlimited possibilities with a heretofore untapped market: a European audience which had rarely even seen a Black person let alone one who spoke like a native Yiddishist.

After lining up two producers in Poland, Relkin, whom Variety dubbed “The East Side Yiddish showman”, lived up to that appellation and took what was already an eyebrow raising experience – an articulate and accomplished Black man who had mastered singing in Jewish languages and styles – and transformed it into a living musical diorama of Jewish history underscored by the chosen concert itinerary: Palestine, Egypt, Western and Eastern Europe.

For the tour, Thomas LaRue was transformed into “Toyve Ha’Cohen,” the last part added for its implied “in-your-face” inference of his Jewish priestly lineage. Gone, too, was the story of the inner city child of a single mother who favored the company of Jews, now rebranded with a more colorful creation myth which toggled between: “…a Jew descended from generations of the Ten Lost Tribes in the city of Bet El Set between Abyssinia and Arabia,” (Republika Lodz, November 26, 1930) to his being “…a Shabtis, [a descendant of the followers of the 17th century false messiah, Shabbtai Zvi] with a father who was a healer and made herbal elixirs as did Toyve himself in New York” (Dos Naye Lebn, Bilaystock, October 24, 1930).

In the November 21st edition of Unzer Grodner Express, Ha’Cohen’s father was “…named Petrosi, a very cultured man who was a high official in local Abyssinian government, while his mother Alia, died when he was young.” And in order to explain (however improbably) LaRue’s New Jersey residence, Unzer Grodner Moment Express on November 21 noted that his father “…wanted him to be a fully realized Jew, so he was sent to study with a Russian rabbi in Newark.”

After the initial announcement in the June 1928 issue of Variety, the tour was finally ready to begin.

“Cairo (Jewish Telegraphic Agency) En route to Europe, a concert was given here by the Black Cantor from New York where he is known as ‘Toyve the Black Cantor.’ The Black cantor’s program of cantorial hymns and Yiddish folk songs elicited great interest and his large audiences had many non-Jews.”

The tour’s first European stop was Warsaw, the jewel in the crown of cantorial cities, given its world-renowned synagogues. Warsaw Jewish audiences were tough. Their enthusiastic devotion to cantorial singing split the difference between being about spiritual or esthetic uplift and being an aggressive blood sport.

It was the latter which LaRue would experience at his premier.

In an unsigned October 10 Unzer Express concert review, the author makes clear at the outset (and at the close too, for good measure) that Eddie Rankin’s Polish partners were two “shady characters” who had earlier produced a disastrous cantorial concert leaving angry attendees demanding refunds, with the promoters nowhere to be found. This, then, was the Warsaw community (and Unzer Express) declaring war on the impresarios via the Toyve concert.

Knowing that they had previously been conned by the “shady characters,” everyone figured that the “Black Cantor” was a scam, too.

When LaRue stepped onto the stage, Conservatory Hall was largely empty but for some comped guests, a handful of intrepid curious and the ubiquitous confrontational hecklers in the gallery (at one point, they derisively called out “Sing ‘Sonny Boy!'” referring to the Al Jolson hit of the previous season).

And, despite LaRue not being the primary target of the boycott, the collateral damage he experienced was decisive, resulting in a truncated 50 minute concert with what little audience there was streaming out. It was capped off with a corrosive poison pen hit-piece in Unzer Express chastising LaRue for his stage mannerisms, his cantorial singing being influenced by 78 rpms, and even his Jewishness.

On the Unzer Express humor page, opposite the scathing review, a cartoon (which may appear offensive by today’s standards) continues to jab at the producers accused of booking someone who doesn’t even know how to read from a prayerbook:

“Toyvele, the Black cantor demonstrated here that the defamation he faced in the pages of a well known Warsaw newspaper was completely without merit.”

So ran the lead line in the October 29 review of LaRue’s Bialystock concert. The paper, Dos Naye Leben (The New Life) had been fans of LaRue’s since 1921 when they re-ran an ecstatic review from New York’s Morgn Zhurnal about LaRue in “Yente Telebende.”

The paper rolled out the red carpet for LaRue giving him three features including an October 24 sit down with their editor:

The writer also deflated the charge in the Warsaw paper about LaRue’s reliance on commercial sound recordings by deftly acknowledging it:

“True, his cantorial prayers sound as if he learned them off phonograph records and lack the burning immediacy of traditional cantorial improvisation, but the same can be said for a hundred percent of modern cantors even those who are currently practicing.”

“...the audience gave him several standing ovations not allowing him to go on with the rest of the concert…. He is an unrivaled master worthy of the kind of praise heaped upon opera singers. In bestowing sincerity, honesty and artistic heart in each of his songs, you experience his true artistry.”

After appearing in Grodno on October 25th, then traveling to Leipzig and Berlin at the beginning of November, Larue returned to Grodno towards the end of the month amid a flurry of intense local interest, with Unzer Grodner Express (Our Grodno Express) reporting on November 20:

” …the Black cantor arrives here direct from Berlin where his concerts in their largest concert hall generated such a colossal response that he had to increase to 12 his scheduled three concerts… The Berlin music critics were effusive in their praise of the Black cantor in the Berliner Tageblatt, Vossische Zeitung, Morgen Post and many others. Reviewers were captivated by the concerts so it would stand to reason that in Grodno – where we know a thing or two about cantors – his imminent arrival has generated so much interest.”

Following a performance in Lodz, LaRue would end his European tour where it started in Warsaw, as a guest of the Polish state radio in a concert of cantorial songs, thus having the last word in the city which gave his European tour its terrible start.

There would be a small European coda when LaRue returned to Europe the following year. An Associated Press dispatch in the April 13, 1931 New York Times noted that Toyve Ha’Cohen had just sung at the Hungarian Academy of Music in Budapest. Curiously, there appear to be no mentions of LaRue in the New York Times for any of his local New York performances.

In 1936, LaRue’s old employers, Jacobs and Goldberg (for whom he did Dos Khupe Kleyd and Yente Telebende), brought him back to the theater in the drama Di Falshe Tokhter (The False Daughter) at Brooklyn’s Parkway theater, having lost their Harlem Lenox Theater during The Depression. LaRue’s appearance – in a specially created “cabaret” scene – not only made it into the Yiddish press, but was also carried in the October 10th edition of the African-American newspaper The Amsterdam News.

One preview notice for a 1936 New Year’s eve concert and dinner dance at a synagogue in East Orange, New Jersey reveals the kind of complicated dynamic between LaRue and the communities he served. Atypically, LaRue is not singing cantorial and Yiddish music, but leading something called “The Bumble Bees Radio Broadcast Orchestra” and, in a reprise of an appearance at their last New Year party, organized and MC’d a minstrel show replete with “coon shouters” (blues singers).

The last known LaRue appearance is for a December 1953 Hanukah concert in his native Newark.

LaRue remains a cypher, occasionally visible in articles and display ads in period newspapers as a performer but also naggingly invisible there, too as a man.

LaRue inhabited a curious niche within the Jewish community, an uneasy mix of being apart from and a part of it.

Did he marry? Did he have children? Did he attend a synagogue when not performing synagogue music? What did he do between the ever-decreasing Jewish concerts? For that matter, was he even Jewish?

The kind of music culture in which LaRue had invested himself would, in the outwash of the Holocaust, go into a freefall with post-War Jewish audiences for whom the old time florid soloistic cantorial style gave way to milder “congregational singing,” while Yiddish, a major Jewish language and its attendant culture would decline after a majority of its speakers were murdered and its fecund old world communities destroyed.

Thomas LaRue’s final resting place was recently discovered in Linden, New Jersey, yet it is tragic that when he passed away, he certainly may not have been honored in the traditional way, which would have greatly resonated: to the strains of “El Mole Rachamim,” the prayer for the dead, a cornerstone intonation in the traditional cantorial repertoire, and something with which LaRue would have been intimately familiar.

A version of this article appeared on Henry Sapoznik’s Research Blog. It appears here as part of Gesher L’Europa, the National Library of Israel’s initiative to connect with people, institutions and communities across Europe and beyond, through storytelling, knowledge sharing and community engagement.