In Vivid Color: Century-Old Postcards Depict the Lives of Jewish Immigrants to America

Bartending cantors, strange outdated customs and Yiddish jokes - These fascinating postcards from the National Library of Israel's collections offer a rare glimpse into the lives of freshly arrived Jewish immigrants to the United States. 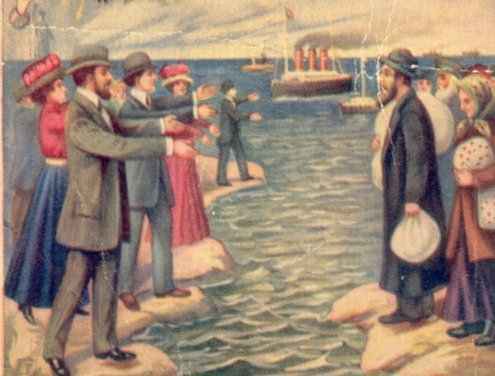 The turn of the 20th century came at the height of a massive wave of Jewish immigration to the United States from eastern Europe.  It is estimated that around three million Jews landed on America’s shores in the period stretching from 1880 to 1924. They came fleeing the pogroms and anti-semitism which had become rampant in their homelands, seeking a new life in a new world.

These new Jewish immigrants brought many of their customs and traditions with them, but the encounter with an American culture on the rise created a unique and rich blend which came to define the new community. Some of the most enlightening remnants of this period in Jewish-American history are the popular holiday greeting cards  which friends and relatives would send each other to mark Jewish festivals.

The National Library of Israel has a large collection of postcards of this type, featuring a range of colorful images with a certain Jewish flair or twist. A selection of them appears below. Some of these cards are based on photographs, while others were drawn by hand, but all of them depict scenes from the day-to-day lives of the new Jewish arrivals in America. Most were intended for use as greeting cards for Rosh Hashana, the Jewish New Year.

Have a look at these postcards from the National Library of Israel’s collections and the Folklore Research Center at the Hebrew University of Jerusalem, and get a glimpse of Jewish-American life as it was a century ago.

Several of these postcards feature whimsical examples of Yiddish humor.

The National Library’s “Time Travel” project is dedicated to collecting and scanning Israeli and Jewish ephemera and making them accessible to the general public, you can browse through the collection here.

Ariel Viterbo of the National Library’s Archives Department assisted in the preparation of this article.