Home > History of Israel > Who Is the Israeli Who Won 10 Olympic Medals?
Diaspora

During the Holocaust, she escaped the Nazis using forged documents. Only a decade later she was known around the world as one of the greatest Olympic gymnasts of all time. Discover the amazing story of Ágnes Keleti. 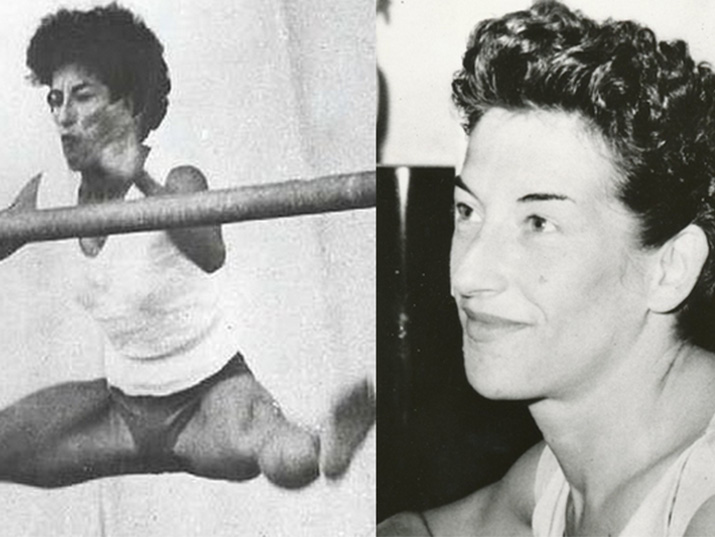 The entire State of Israel may have racked up just one Olympic gold medal in its short history, but Ágnes Keleti, a resident of the Israeli city of Herzliya, is the proud owner of no less than ten Olympic medals – five of them gold.

Keleti was born on January 9, 1921 in Budapest to a well-to-do Jewish family. At the tender age of 4, Keleti began taking “swimming lessons” thanks to her father, who enjoyed tossing her into the lake during family vacations. She was also enrolled in gymnastics at a young age. Despite showing obvious physical talent, Ágnes did not begin to take the sport seriously until age sixteen. Instead, she spent most of her time practicing and playing the cello.

Unlike many other athletes, whose distinct competitive drive pushes them to compete at an international level, Keleti says it was not necessarily her hunger to win medals that motivated her.

“The medals were nice, but I didn’t play sports solely for the accolades. I enjoyed the day-to-day routine and the opportunity to see the world. The Communist regime in Hungary was very tough and not at all to my liking. At the time, most people could not even leave Hungary. I decided to excel in sports in order to see the world. I was fortunate enough to visit places that most people didn’t even dare dream of,” she said in an interview several years ago.

Keleti survived the Holocaust by using a false identity. During the war years, she adopted the name “Yuhasz Piroshka” and assumed the identity of a village maid. Later, she worked in an ammunition factory. Her mother and sister were also saved, thanks to the famous Swedish diplomat Raoul Wallenberg, who was later recognized as one of the Righteous Among the Nations by the State of Israel. Unfortunately, the same luck did not extend to the rest of her family. Her father and uncles were murdered at Auschwitz.

When the war ended, Keleti returned to gymnastics. In 1946, she won the title of ‘Hungarian National Champion,’ which she held until she fled the country in 1956. Her meteoric rise to world fame came at the 1952 Helsinki Olympics. At the age of 31, Keleti won four medals: a gold medal in floor exercise, a silver medal in the all-around team competition, a bronze in the uneven bars and a bronze in the portable apparatus team event.

In 1956, she competed in the Melbourne Olympics, this time at the age of 35 (twice the age of most of her competitors). She won six medals in Melbourne: three gold medals in individual events (floor, uneven bars and balance beam), another gold in the portable apparatus team event and two silver medals in both the individual and team all-around events.

By the end of her career, Keleti had won ten Olympic medals overall, placing her seventh in terms of all-time medal winners in Olympic history. For comparison, the legendary Carl Lewis also has ten medals to his name, while Mark Spitz has eleven medals in total. In fact, Ágnes Keleti holds more medals than other familiar sports legends like Nadia Comăneci and Usain Bolt. Yet what is perhaps most impressive about Keleti’s medal run is that she won nine out of her ten Olympic medals after reaching the age of 30.

Escape from Hungary and Immigration to Israel

While Keleti was halfway across the world competing in the Melbourne Olympics, a national rebellion was brutally put down by the Soviet regime in her native Hungary. When the revolt broke out, Keleti made the difficult decision not to return to the country for which she was competing. Together with other Hungarian athletes, she appealed to the Australian government for asylum. Their request was granted.

In fact, Keleti had already begun plotting her escape from Hungary prior to her departure for the Melbourne Olympics: “I had had enough of this bloody regime. One day I was swimming in the national team’s heated pool and a young man offered to drive me home. I agreed, but after a while I noticed that we weren’t heading in the direction of my house. He took me to the communist party headquarters and, there, they tried to convince me to spy on my teammates. In that very moment, I realized that I must escape” she told an interviewer.

Although she was an international Olympic star, Keleti was unsuccessful at finding acceptable work in Australia. One day, she received a telegram from Professor Gifstein, her physical education teacher from the Jewish gymnasium in Budapest. In the telegram, he told her that he had decided to immigrate to Israel.

Gifstein invited her to come to Israel to continue her training while adding a warning: “There is nothing here. Bring equipment with you.” Keleti decided to accept his invitation nonetheless and arrived in Israel in 1957, just in time to participate in the Fifth Maccabiah Games.

The press in Israel was very excited by Keleti’s arrival in the country. Because of her success at the previous Olympics, she became one of the biggest stars of the Fifth Maccabiah. The stands were packed as Ágnes Keleti took to the floor, this time in her new home of Israel.