Theodor Harburger’s photographs of synagogues, cemeteries and ritual objects are all that remain of the rural Jewish communities of Bavaria after the Holocaust. 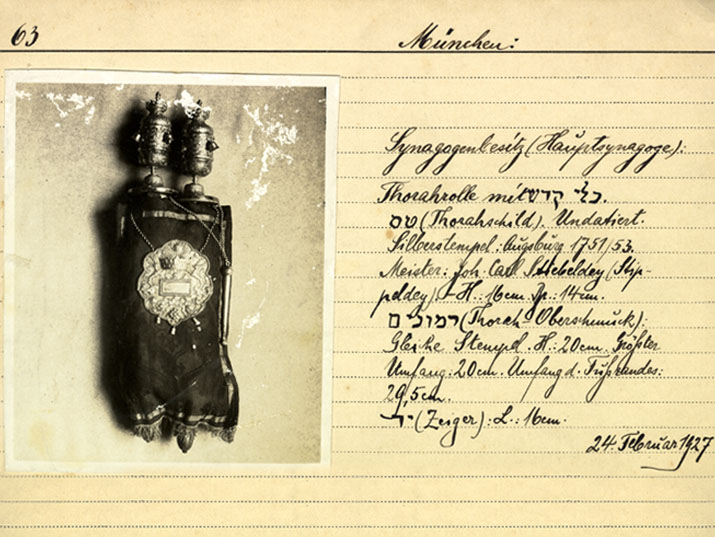 File record from Theodor Harburger's collection of photographs for a Sefer Torah (Torah Scroll) from Munich, Germany, Central Archives for the History of the Jewish People.

By the end of the 19th-century, many of the smaller Jewish communities in rural Germany had begun to shrink. Many young people were leaving home for the big cities or for America in search of higher education and employment. Several smaller Jewish communities were completely dismantled, their synagogues abandoned, and objects of religious, cultural and artistic value were lost or sold off.

In the Bavaria region, the Jewish communities, fearing their cultural heritage may be lost to time, took initiative and established an association for the documentation of Jewish art and culture. They brought an art historian named Theodor Harburger on board to begin documenting the unique culture that existed in the rural Jewish Bavarian communities at the time. Harburger took on the project gladly and set his own goal of providing his Jewish contemporaries an awareness of their own heritage and local culture.

Between 1926 and 1932, Theodor Harbuger photographed and documented Jewish ritual objects and synagogues dating as far back as the 17th and 18th centuries. Harburger was acutely aware of the importance of his work and took the assignment very seriously, working in an organized manner, documenting every step of the way, preserving for the future those items which characterized Jewish life.

Over the course of six years in the field, Harburger managed to take over 800 photographs in 213 communities in Bavaria. In addition to thoroughly cataloging each subject by including the name and material of the item, its measurements, and the name of the artist, he also included handwritten notes for each place he visited.

Synagogues, cemeteries and ritual objects all underwent the intensive documentation process set up by Harburger to ensure he was preserving the community in the best way possible. While he did not photograph every object he came across, he highlighted the most interesting items and took notes on others that were not to be included in the images.

Harburger set about his work with the hope that his intensive study of the rich and vast history of Jewish communities of Bavaria might bring about a renewal of modern Jewish life in the area and that perhaps even the local Christian communities could benefit from the rich cultural heritage the Jews had to offer. Little did he know that, just a few years after completing his work, those Jewish communities would be no more.

With the rise of the Nazi party in 1933, Harburger immigrated to the Land of Israel with more than 1,000 glass negatives and hundreds of pages of drawings. That was all that remained of his six-year project when the reality he so painstakingly documented disappeared just five years later, in November 1938, during the anti-Jewish riots of Kristallnacht – the Night of Broken Glass. The sites he had photographed were destroyed and many of the objects he documented were stolen while others were vandalized or destroyed.

Harburger’s photographs, many of which were unique, bear witness to all that was there before the Holocaust, to the communities that once thrived and contributed to Bavaria’s rich cultural tapestry. Not much is known about his activities in Germany or in Israel following this project but his work has had a lasting impact. Approximately twenty percent of the items he photographed have since been rehoused in museums around the world. It was his work that provided accurate geographical and technical information to those institutions.

Theodor Harburger died on October 15, 1949. In 1957, the Central Archives for the History of the Jewish People (CAHJP) acquired his collection of glass negatives, slides, contact photos, notes and booklets from his widow, Meta Harburger. Hundreds of photographs from Harburger collection were published in a three-volume catalog, edited by Bernhard Purin, following an exhibition in Fuerth, Germany. The photographs are being used today in various studies in the field of provenance research.

Thanks to Hadassah Assouline from the Central Archives for the History of the Jewish People (CAHJP) for her help in writing this article. Parts of this article first appeared in an issue of Segula Magazine in December 2010.