Home > Ashkenazic Jewry > In the Shadow of Death: The Revival of the Jerusalem of Lithuania
Diaspora

Rare photographs newly revealed by the National Library of Israel document the cultural life of the Vilna Ghetto in the years 1942-1943. 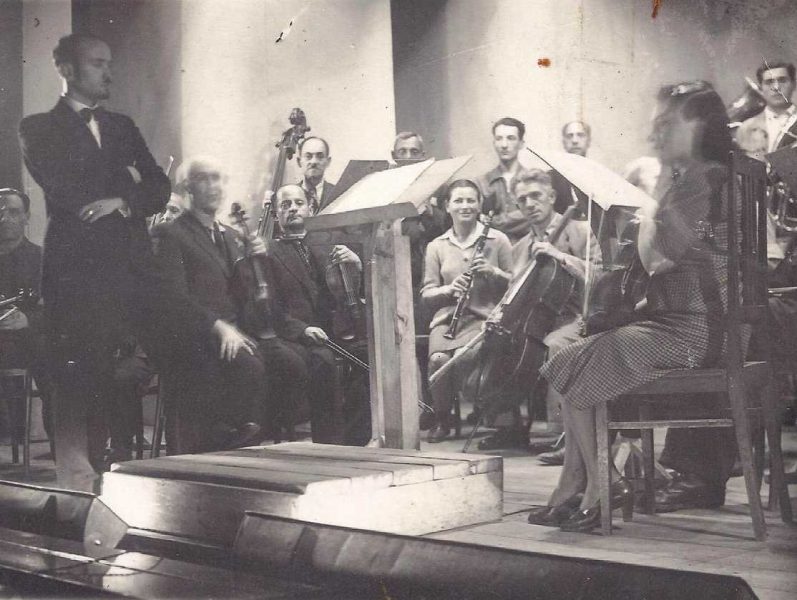 A closer look at this suitcase reveals that it is not a typical piece of luggage. It was not manufactured in a factory or even a proper workshop and it certainly wasn’t purchased in a fancy department store. The suitcase has a rather crude appearance, but the story behind it makes up for it all.

This suitcase was made in the Naroch forest in Belarus, not far from the border of Lithuania, exactly 50 years before it was deposited in the National Library of Israel in Jerusalem. It was made of tin fragments from the wings of a crashed airplane and contained, among other archival materials, a small but astonishing collection of photographs saved from the Vilna Ghetto.

The failure of the German “Blitzkrieg” against the Soviet Union and the creation of a permanent state of war created a serious problem for the Nazi economy, including a deficit in manpower. The thousands of Jews who lived in the Vilna Ghetto and in other ghettos in Lithuania, were an important source of labor for the German occupiers. The Nazi regime elected not to murder the remaining Jews in the area and to instead use them as slaves to bolster the dwindling work force. This is how the Jews of the Vilna Ghetto gained some semblance of stability and peace from the start of 1942 into the spring of 1943. During this time there were no mass killings, though numerous murders did take place. Most of the Jews worked in various factories and workshops in and around the ghetto. The internal organization of the ghetto became very developed as cultural, educational, health, and welfare institutions were established.

Avraham Sutzkever, then a 28-year-old poet, had an important role in the cultural activity of the ghetto. “As long as I live a poet’s life in this valley of death,” he wrote later, “I shall be redeemed from my misery.”

Sutzkever became the artistic director of the ghetto theater, translating and adapting various pieces for the stage, and his poetry, written in the ghetto, was a central part of the popular reading evenings which took place there. Cultural activity flourished among the residents of the Vilna Ghetto, with the establishment of schools, a theatre, Yiddish and Hebrew choirs, an orchestra, opera, ballet, a children’s puppet theatre, an active library, a newspaper, and even sports competitions. Lectures and literary events were also a common occurrence. “The Jerusalem of Lithuania,” one of the most important Jewish communities in Europe, was revived under the shadow of death.

Sutzkever wasn’t just creating culture in the Ghetto; he was actively saving significant cultural treasures from the Nazis. Along with his close friend, the poet Shmerke Kachergionski, he joined the “Paper Brigade,” headed by Zelig Kalmanowitz, Dr. Hermann Kruk and the famous librarian Chaikel Lunski. The story of this group dedicated to the preservation of local Jewish culture was wonderfully described by David Fishman in his research, “The Book Smugglers.”

Within the various materials Sutzkever managed to gather, the photographs are especially interesting. Only a few dozen survived and reached us at the Library, but they all wonderfully reflect the spirit of the Jews in the Vilna Ghetto during that time. Surprisingly, some of the residents of the Vilna Ghetto managed to dabble in photography. Based on the photographs, we can assume that none of them were professional photographers and that these images were likely developed in difficult conditions.

There are not many known photographs of the Vilna Ghetto. Holding a camera or dealing with photography was, of course, strictly forbidden by the Nazis. The photographs from the Sutzkever Collection are, therefore, a rare documentation of everyday life in the ghetto as shown by some of its inmates, who were likely amateur photographers.  Most of these pictures are anonymous. We have found Sutzkever’s inscription, with the photographer’s name – B. Kaczerginsky – on the back of only one of the photos. The inscription likely referred to Berl Kaczerginsky, one of the Jewish policemen of the ghetto, who owned a camera. Many of the pictures were likely taken by the same policemen, as a relatively large number of photos feature the Ghetto Police and the Head of the Ghetto, Jacob Gens.

Some of those photographs were staged, and it is quite clear that the subjects of the photos were very much aware of the camera in front of them. In some pictures, they even look directly into the camera lens. A parade of the Ghetto Gate Guard, a group photograph of the guards and photographs of their commander, Moishe Levas, give us a glimpse of one of the most hated institutions among the ghetto inmates. On the other hand, the ghetto guards were those who enabled Sutzkever and his colleagues in the “Paper Brigade” to smuggle books, archival materials and various works of art into the ghetto. Moishe Levas was very much aware of the activity of Sutzkever and his friends, and he assisted them in smuggling those materials into the ghetto in various ways.

Sutzkever managed to collect photographs which reflected the daily life in the ghetto from various aspects: simple street scenes, various advertisements on the walls, and pictures of cultural and educational institutions.

Without knowing the circumstances in which the photographs were taken, one could think they were created in a typical European city during peaceful, normal times. The clock on the ghetto’s main street, the morning advertisements hung up on the ghetto walls, and of course, the cultural activities of the Jewish community, all stir up a feeling of amazement at the simplicity and banality of the images, considering all that is happening around them.

The most incredible photograph in the bunch is that of the Ghetto Orchestra with its conductor, Wolf Durmashkin. This renowned musician, who before the War was the conductor of the Vilna Symphonic Orchestra, is seen standing strong and dignified wearing tuxedo tails, as the other musicians around him smile for the camera. The shining shoes of the first violinist leave no doubt as to the mood  these people were in. This photograph proves the strength of the human spirit, even in the most difficult of times. The orchestra’s piano, though not included in the photographs, was smuggled into the Ghetto piece by piece and then rebuilt by a specialist.  It is important to recognize that, just as Sutzkever never stopped writing poetry, Durmashkin and his musicians always continued playing and creating music, dedicated to preserving their art and their human dignity.

To paraphrase Hanna Arendt’s controversial concept, “the banality of evil,” these photographs reflect how the ghetto inmates desperately tried to hold on to the “banality of life under evil,” and to pretend they could keep living normally despite the death and misery that surrounded them. The photographers were full partners in creating this illusion. Since there was a need for cooperation between the photographer and the subjects, it can be assumed that the maker of the images also sought to transmit a banal and normal picture of life, by creating a visual image using the most ordinary of methods.

Unlike photographs from other ghettos, and even from ghettos in Lithuania itself, none of the true horrors that were experienced are captured in the photographs in the Sutzkever Collection from Vilna. There are no photographs of children dying in the streets, starving people or the many other miseries faced by the ghetto inmates. The terrible reality of the ghetto, as Sutzkever described in detail in his testimonial book, was not reflected at all in the photographs he had collected during his stay there. It seems that, in real time, the ghetto inmates wanted to stay as far as possible from the abnormal circumstances in which they lived, and tried to reflect a stabilized, ordinary way of life, which was, of course, just an illusion. Sutzkever’s photographs therefore, do not document the life of the ghetto as it really was, but rather life as its inmates wanted it to be. By the power of their spirit, these Lithuanian Jews miraculously escaped from reality and created an alternate universe for themselves.