Caught in the Rain? This Yiddish Umbrella Service Is Precisely What You Need!

As a Jewish history buff, I spend a lot of time on JPress (the Historical Jewish Press website), and every day I stumble upon another pearl.

A few days ago, I found in the December 31, 1916 issue of the New York Yiddish newspaper Die Wahrheit, what seemed like one of the craziest start-ups I had ever come across in my life: the National Umbrella Service Inc. Not only did the service look innovative, the advertisement was also pretty creative. 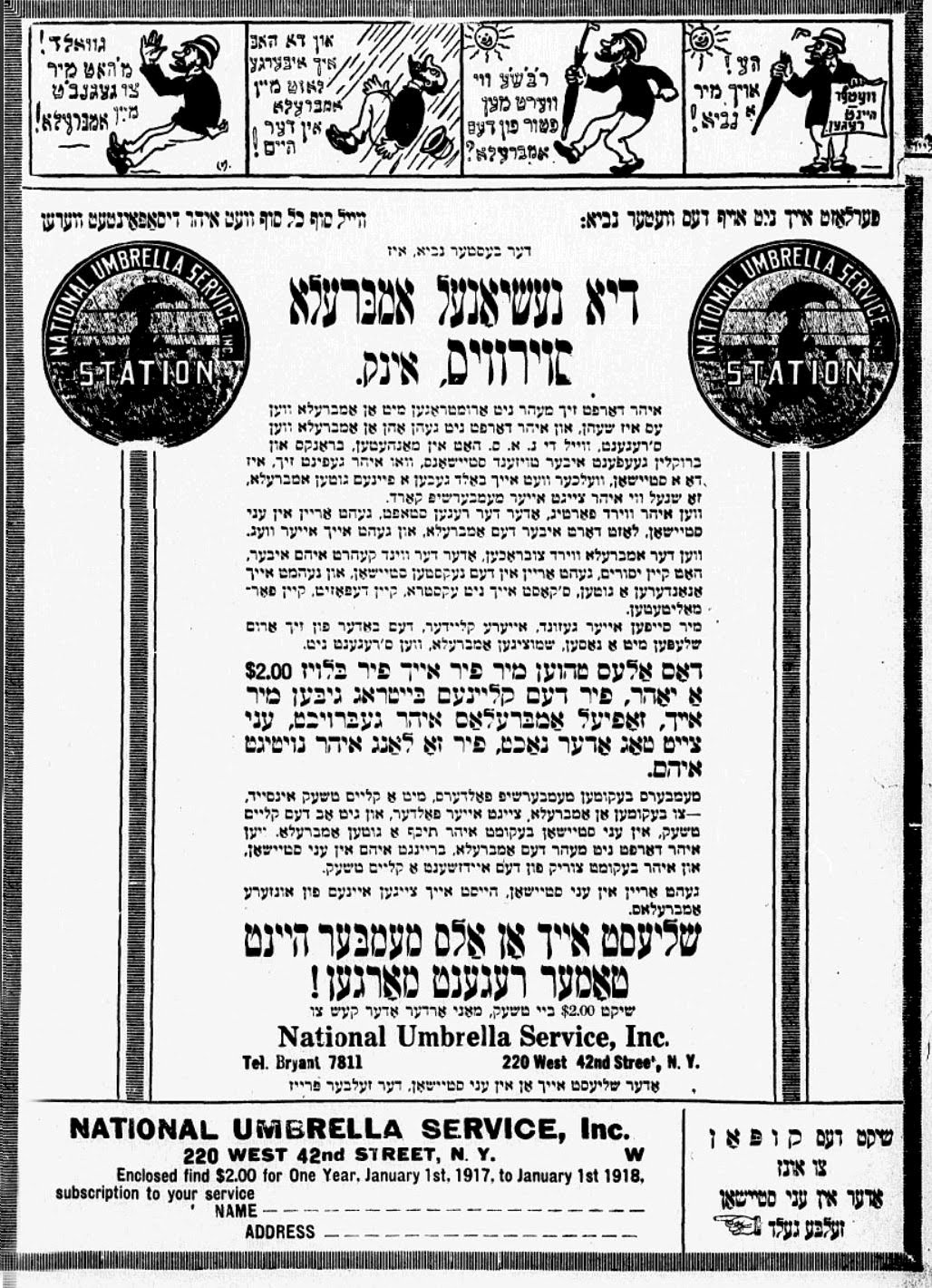 Let’s begin with the comic strip at the top. A Jew leaves his house in the morning (you can see that he’s Jewish, right?) holding a weather report that says “Rain Today,” while outside the sun is shining! “Hah. Another prophet!” says the Jews to himself holding up his umbrella. In the next frame, the smiling sun beats down on the fellow, who says: “Good God! How can I get rid of this umbrella!”

In the next picture, it’s pouring outside, and the forlorn Jew says, “I left my umbrella at home!” And in the last illustration, he cries, “Gevalt! Someone stole my umbrella!”

So, how did this start-up work? For those Yiddish-challenged readers among us, the ad says that: across Manhattan, the Bronx and Brooklyn over 1000 umbrella rental stations have been opened. All one had to do was pay the two dollar per year subscription fee and you could borrow, return, fix or exchange a broken umbrella on the spot at no extra cost!

What a concept! This surely promised an end to shmutzicke umbrellas! (The proper Yiddish word for umbrella, by the way is shirem.) While we’re at it, here’s a funny little Yiddish curse: Zol er aropshlingen a shirem un s’zol zikh im efenen in boykh! – “May he swallow an umbrella and have it open up in his belly!”

So what became of this revolutionary idea? To find out, I consulted the American historical newspaper website Chronicling America, where I found more ads for the National Umbrella Service, such as this rather dry one (for such a wet business, and without even a bit of Jewish humor) in the New York Tribune from December 14, 1916. 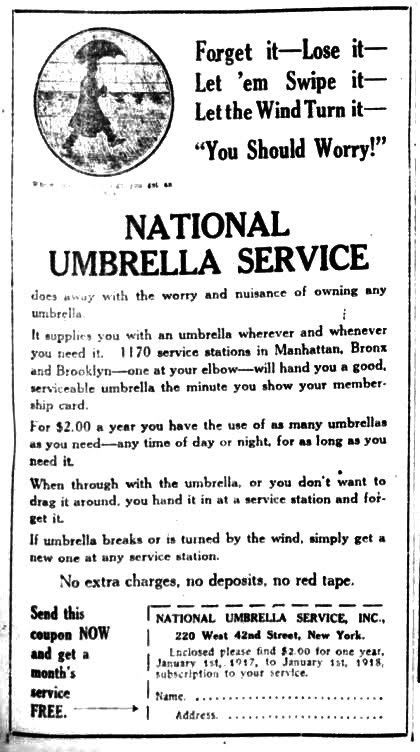 The fact that the ads ran for just two weeks—from mid-December until the beginning of January—is more than enough proof that the business never really took off. Indeed, the “Business Troubles” section of the June 14, 1917 issue of The Sun, includes an item about the National Umbrella Service filing for bankruptcy.

But why did this umbrella business collapse? Did others succeed where it failed? If a bike-sharing service can make it, why not an umbrella-sharing one? It seems that the people of China don’t read the Yiddish press, and perhaps that’s why a recent venture of theirs failed in similar fashion: In 2017, the Chinese entrepreneur Zhou Shu Ping from the city of Shenzhen launched an umbrella sharing service in Shenzhen and 11 other cities, but within a few months almost all of the project’s 300,000 umbrellas had been stolen. 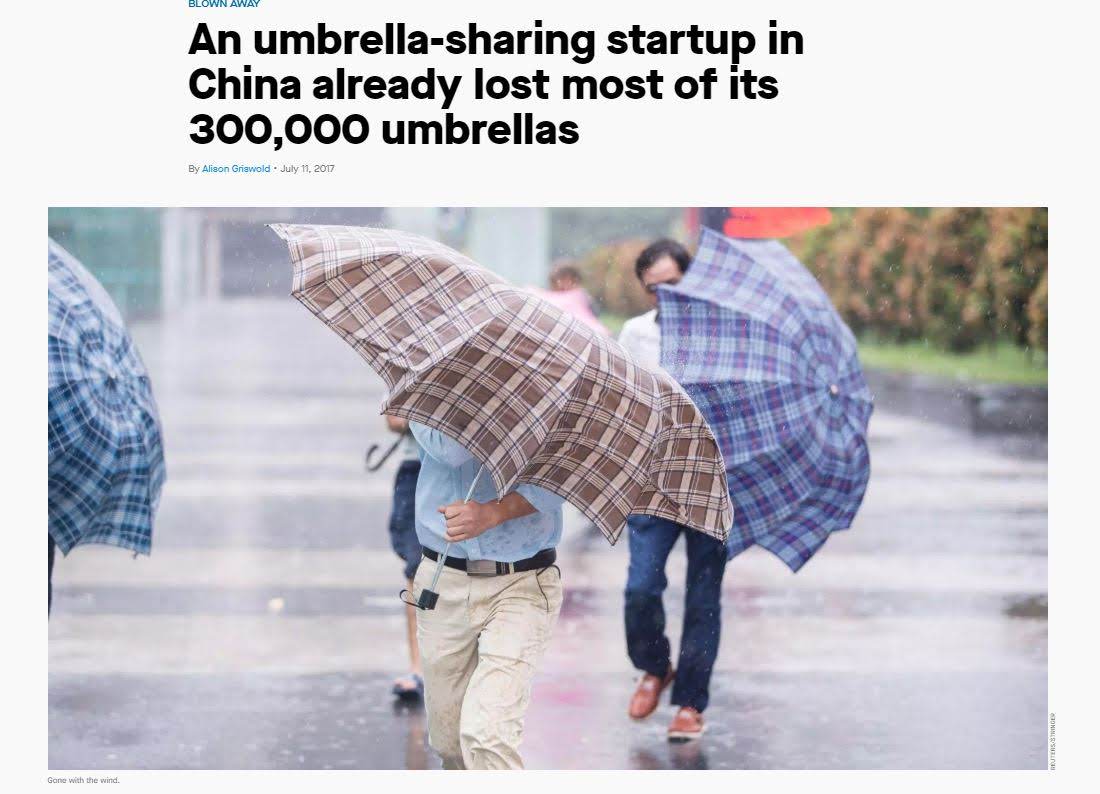 Another, more modest, umbrella-sharing service called UMBRACITY, is operating for the time being in Vancouver, Canada, with dozens of smart umbrella rental stations scattered in stores across the city. How does it work? There’s an app: push a button on your smartphone and the umbrella is yours.

There are more—in the city of Aarhus in Denmark, the DripDrop service has over 25 umbrella stations throughout the city. The rather unimaginative slogan is: “Happiness is having an umbrella when it rains”

And there are some somewhat less sophisticated services like this one which opened up a few days ago in the Pasir Ris neighborhood in Singapore, dedicated to the memory of Grandma Sylvia. 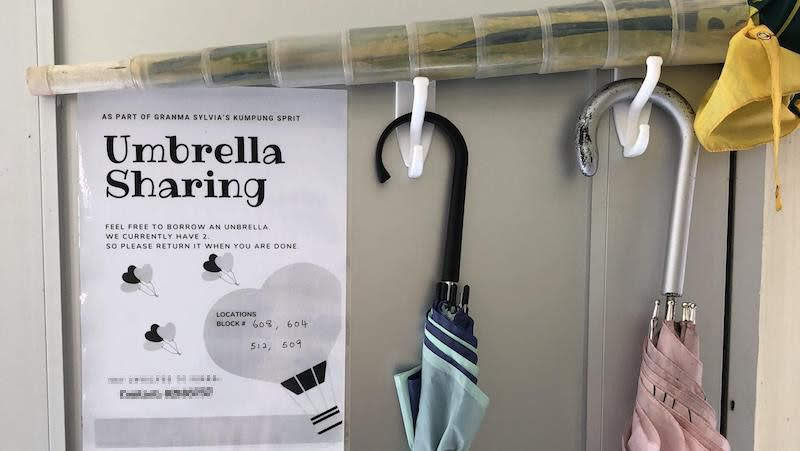 In any case, whether you’re renting or you’ve decided to buy, we urge you to always have an umbrella at hand during this rainy season. As they say: Men antloyft fun regn, bagegnt men hogl! – “Run away from rain and you get hail!”

Who Spilled Honey on the 18th Century Manuscript? Spotted Off the Shores of the Holy Land: The Little Mermaid