Home > Gesher L’Europa > When Buchenwald Was Liberated: A First Glimpse of the Holocaust
Diaspora

What was revealed when Western forces finally captured one of the major Nazi concentration camps? A rare document discovered at the National Library of Israel holds the answers. 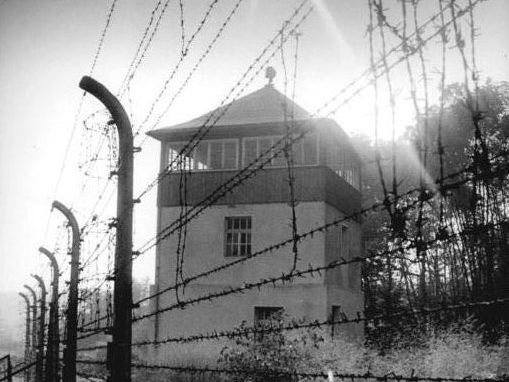 The watchtower at the Buchenwald memorial site. Photo: The German Federal Archives.

Content warning – contains graphic descriptions of the realities of the Holocaust

The cars drove down a beautiful country road, lined with blossoming fruit trees, as the warm spring weather heralded a new beginning. The war was nearing its end. Little more than 130 miles away, the Nazis were making their futile last stand in Berlin as the Allies slowly closed in. In a few days, Hitler would be dead.

The vehicles soon made their way up into a wooded, hilly area. Within a few minutes, the short drive from the local airfield came to an end as the trees cleared, and the cars pulled up at the gates of Buchenwald.

Tom Driberg emerged from one of the vehicles along with nine other members of the British Parliament – an official delegation, sent by Prime Minister Winston Churchill to examine the worst of the newly liberated concentration camps which had been captured by Western forces.

Driberg was many things, but he was hardly a senior member of this group. Quite the contrary, in fact. The official head of the delegation, which was made up of representatives from all political parties, was Earl James Richard Stanhope of the House of Lords. Thomas Edward Neil Driberg was a communist member of the Labour Party, a devout Catholic, and in April 1945,  a 39-year-old backbencher in the House of Commons.

He was also an openly gay man during a time when his lifestyle made him a criminal in the United Kingdom. He would befriend the likes of Aleister Crowley, Mick Jagger and Allen Ginsberg and later in life would be suspected as a possible Soviet spy. Driberg’s larger-than-life persona and tendency to go against the grain would make him famous, but it is often forgotten that he played a small but important role in this particular moment in history.

It was Driberg’s skill as a journalist, his former profession, which gained him his place in the delegation to Buchenwald. General Dwight D. Eisenhower, the Supreme Allied Commander, had specifically requested that Churchill include a journalist or two in the group, and so it fell to Tom Driberg to write up the delegation’s official report.

A rare copy of that same report has now been discovered in the archives of the National Library of Israel.

The delegation strode through the gates, above which hung a sign in German: “Recht oder unrecht-mein Vaterland” (My country right or wrong) was the ominous welcoming message. It was April 21st, 1945. Buchenwald had been liberated by the U.S. Army ten days earlier. This was the first time the West was able to directly access the Nazi camps. “Our objective was to ‘find out the truth,’ while the evidence was still fresh,” Driberg wrote in the report.

The barracks and huts of Buchenwald were now visible. “It is badly laid out, on sloping uneven ground.” Driberg wrote of the camp, “The walls and paths are ill kept; at the time of our visit they were covered with dust, which blew about in the wind, and in wet weather the camp must be deep in mud.”

Colorful slogans were being painted on the sides of the buildings, greeting the liberating soldiers in different languages. A life-size effigy of Hitler hung from a gibbet, adorned with the words “Hitler must die that Germany may live” in German. Many of the former prisoners were still here. The report notes that a “certain number” had already left, but thousands were still too weak to travel.

Driberg described the attempts of the delegation members to communicate with the former prisoners. While two of the members spoke German, there  were plenty of English speakers among the inmates – “Many were unable to speak: they lay in a semi-coma, or following us with their eyes. Others spoke freely, displaying sores and severe scars and bruises which could have been caused by kicks and blows. They lay on the floor on and under quilts… in a state of extreme emaciation.”

Buchenwald was not an official death camp, but death was no stranger here – “a policy of steady starvation and inhuman brutality” had been carried out at the facility. The basic daily ration consisted of “a bowl of watery soup and a chunk of dry bread.” The report cites figures that state that, by April 1945, 51,572 people had died or were killed at Buchenwald, or were removed and immediately killed at one of the subsidiary extermination camps.

The grim scenes and somber mood stood in contrast to a sense of relief and even happiness that was also present among some of the survivors following their liberation: “One half-naked skeleton, tottering painfully along the passage as though on stilts, drew himself up when he saw our party, smiled, and saluted.” Though treatment was now being given to the victims of the horrors, for many it came too late; 35 people died at Buchenwald on the day before the delegation’s visit.

The worst cases of maltreatment were being treated in one of the few huts that did not have a dirt floor. When the Nazis still ran the camp, this building housed the only women living on the compound. They were brought to Buchenwald from other camps and “induced by threats and promises of better treatment, to become prostitutes, but were subsequently killed.” This had once been the camp brothel, “to which the higher-grade prisoners – those employed in various supervisory jobs, with extra rations and other privileges – were allowed to resort for twenty minutes at a time.”

Driberg described seeing a laboratory “with a large number of glass jars containing preserved specimens of human organs.” He mentioned “experiments in sterilization” performed on Jews, noting that two members of the delegation had seen the unmistakable scars on one of the victims. He and his colleagues were told of “articles made of human skin,” collected by Frau Koch, the wife of the German camp commander. One such item which Driberg saw with his own eyes “clearly formed part of a lampshade.”

The report mentions several of the inmates by name, including 19-year-old Joseph Berman, who had been through several Nazi camps. In one he lost a forefinger when an annoyed Nazi guard pushed his hand into a machine. Driberg would later help the Latvian-born Berman immigrate to Britain and find work. In the coming years he would provide testimony of Nazi crimes in the Baltic States. The delegation also met 14-year-old Abraham Kirchenblatt of Radom, Poland who “impressed members of our party as an intelligent and reliable witness; he stated that he had seen his 18-year-old brother shot and his parents taken away, he believed for cremation: he never saw them again.”

Indeed, death was the fate which awaited those of the prisoners who were deemed “useless” or who proved too stubborn to manage. “Hanging appears to have been the regular method of killing,” wrote Driberg. There was one gibbet in the yard, “near a pile of white ashes,” while another was found in the mortuary basement, where the delegation members were also shown a heavy blood-stained club used for knocking out “any who died too slowly.” From the basement, the bodies were transferred to a crematorium on the ground floor using an electric lift.

Outside the crematorium, the delegation members were shown carts filled with bodies of prisoners who had died of hunger or disease. These corpses were still waiting for burial. General Eisenhower had personally ordered that the German inhabitants of the nearby areas provide for the individual burial of each body “with their own hands.” Indeed, groups of German civilians were being brought in daily “to see what had been done in their name and in their midst.”

Several different inmates told the delegation that conditions were far worse in other camps, particularly those in Eastern Europe, with Auschwitz (liberated by the Soviets less than three months earlier) being described as the worst of all.

“Such camps as this mark the lowest point of degradation to which humanity has yet descended.” Driberg wrote in the report’s closing remarks, “The memory of what we saw at Buchenwald will haunt us ineffaceably for many years.”

Amy Simon, a cataloguer in the National Library’s Foreign Languages Department, contributed to this article.