Imre Lichtenfeld developed Krav Maga as a method of defensive street fighting against anti-Semitic attacks in the city formerly known as Pressburg. 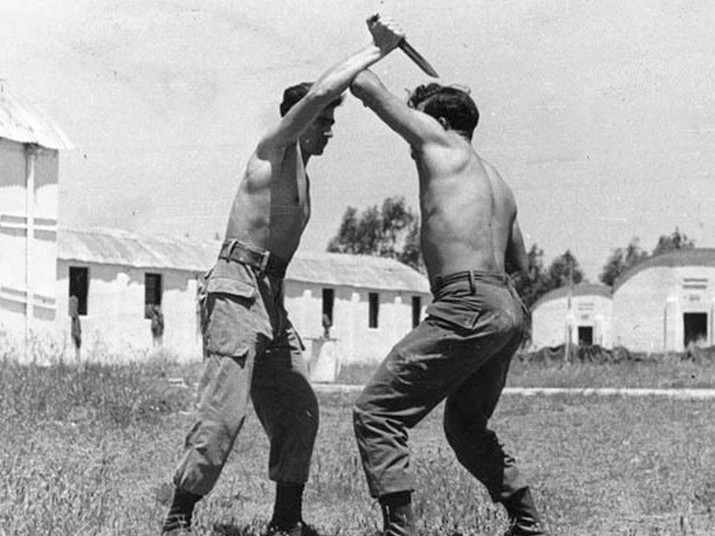 Pressburg is the historical name of Bratislava, today the capital of Slovakia, a place with a rich Jewish history that was interrupted about 70 years ago. The city is unique in its location, sharing borders with two other countries – Hungary and Austria- which also used to have large Jewish populations. The famous Pressburg yeshiva no longer exists in the city but if you stroll through Jerusalem today, you may come across a yeshiva there named after the original one in Pressburg. You are also sure to see at least one street named in honor of the more famous residents of Pressburg, including the Chatam Sofer, a leading rabbi of European Jewry in the early 19th century, and Imre Lichtenfeld, the founder of Krav Maga.

There is still a Jewish presence maintained in Bratislava in modern times, despite the fact that the large and very impressive synagogue was destroyed due to the construction of a new bridge in the 1960s under communist rule. A tram line was also built through the former Jewish cemetery though several tombs were preserved, including that of Moshe Schreiber, otherwise known as the Chatam Sofer. Jews from all over the world who flock to Bratislava to visit his grave get off the tram at the stop named “Chatam Sofer.”

The memorial for the Chatam Sofer, the last remaining synagogue in the city and the Museum of Jewish Culture can be visited for free during the European Days of Jewish Culture festival, which takes place every year on the first Sunday of September. There is a temporary exhibition in the Museum dedicated to Imre Lichtenfeld or Imre Sde´Or, a founder of the Israeli self-defense art of Krav Maga, who spent an important and defining part of his life in Bratislava. Krav Maga has today become a popular sport but was originally taught for self-defense and survival in the streets of the Pressburg Jewish quarter.

Imre Lichtenfeld was born in Budapest in 1910 but spent his childhood in Bratislava. It was in the late 1930s, in reaction to anti-Semitism and anti-Jewish riots in Bratislava, that he came up with the idea to transform street fighting into a proper style of self-defense. In May of 1940, following the German occupation of Czechoslovakia and the splitting up of the nation, Imre managed to escape the country and the hands of the Nazis on a steamboat called Pentcho headed for the Land of Israel. This river-boat was not built to be used on the open sea but those on board did not have any other option. The Pentcho shipwrecked on the Greek Dodecanese Islands and Imri, along with several other survivors, were saved by the British. Imre ended up in Egypt which was under British control. After serving time in the Free Czech Legion, he was released and he was finally able to travel to the Land of Israel where he began training members of Haganah and the police force in 1944.

With the foundation of the State of Israel, Imre trained soldiers as the Chief Instructor for Physical Fitness and Krav Maga in physical fitness, knife fighting, street fighting, and swimming. He served in the military for twenty years, always refining his methodologies for hand-to-hand combat. It was after his retirement that he developed the style of fighting for civilian use as well, and Krav Maga gained global popularity. Imre Lichtenfeld died in 1998 at the age of 88.

If you find yourself visiting Bratislava nowadays, you may have to look a little closer to find the Jewish presence but it certainly is alive and thriving. There are theological classes available and a renewal of Yiddish culture and music is also apparent, with bands reviving old Jewish songs from before the World War II era. While Jews no longer represent twelve percent of the population as they used to, a visit to the city will allow you to experience a still vibrant and lively Jewish culture.

This post was written as part of Gesher L’Europa, the NLI’s initiative to connect with Europe and make our collections available to diverse audiences in Europe and beyond in cooperation with Paideia – The European Institute for Jewish Studies.