Are You a Sadist? The Historic Role of a Controversial Psychological Test

Home > Gesher L’Europa > Are You a Sadist? The Historic Role of a Controversial Psychological Test
Diaspora

Whose test results led Dr. Szondi to declare that “this man has murderous tendencies?” 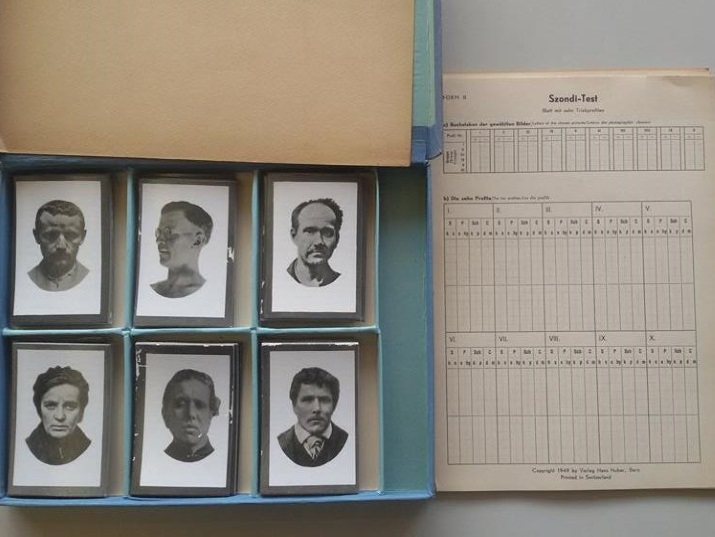 The “Szondi Test” is undoubtedly one of the strangest items found in our collections at the National Library of Israel.

What is so strange about the test developed by the Jewish-Hungarian psychologist Leopold Szondi? And whose test results led Dr. Szondi to declare that “it is crystal clear that this man has murderous tendencies?”

In January 1961, Dr. Shlomo Kulchar, the manager of the psychiatric department at the Tel Hashomer Hospital, was summoned to an urgent meeting with Gideon Hausner, the chief prosecutor of the Eichman trial. Hausner presented Dr. Kulchar with a sensitive task – to carry out a psychiatric evaluation of Adolf Eichmann.

Dr. Kluchar met with the subject of the examination multiple times over a period of two months. One of the tests he administered to Eichmann was the “Szondi Test.” Without stating the name of the examinee, Dr. Kulchar submitted the results of the examination to the creator of the test, Leopold Szondi. Szondi had originally refused to perform what he referred to as a “blind diagnosis,” but after a quick review of the results, he simply could not ignore what he saw. He quickly sent a response to the Israeli psychiatrist in which he stated that he had never seen such disturbing results. In a later telephone conversation, Szondi related that, based on the test results, he received the impression that this “man has uncontrollable murderous tendencies (according to an article published in the Yediot Ahronot newspaper on March 10, 2000).”

So, who was Leopold Szondi and what was the test he developed?

The 20th century was a period of intensive research of the human psyche and its flaws. It was in this century that psychology became a scientific discipline, the subconscious became a research category and childhood became a punching bag –something to blame for almost any adult behavior or weakness.

One of the most wide-spread and controversial psychological tests of this “psychological century” was developed in 1937 by the Hungarian-Jewish psychologist, Leopold Szondi. Throughout his life, Szondi grappled with questions of fate and genetics. In contrast with Sigmund Freud who saw childhood as the period in which a person’s personality is formed and in which his mental neuroses develop, Szondi constructed a theory which gave a person’s genetic make-up a definitive role. Szondi believed that the structure of a person’s psyche – and not only his external appearance – is predominantly determined by his genetic material.

Szondi saw human life as a complex game between freedom and restriction – between the freedom given to a person in his personal choices and preferences and his genetic predisposition to certain mental illnesses. In order to precisely diagnose a person’s natural-genetic tendencies, and, no less important, hir or her placement on the scale of each illness, Szondi developed a simple test.

Construction of the medical-psychological history of a patient is a complex task which Szondi attempted to simplify by means of the following test. He collected 48 photographs of patients who suffered from what he (incorrectly) defined as eight different mental illnesses, divided into four pairs of opposites:

Szondi determined that the examinee must go through a set of eight photographs each day for six consecutive days and from each set the examinee must must select two photographs which he or she finds attractive and two which he or she finds repulsive. At the end of the six-day testing period, the subject would have selected 12 favored photographs and 12 detested photographs from which the doctor compiled an in-depth profile of the examinee, establishing his or her place in each category. The entire test is based on a theory which claims that mental illness is expressed in a person’s facial features and that the level of attraction or repulsion a person feels enables diagnosis of which illness is “stored” in his or her genes and at what stage.

The majority of Szodi’s theories along with the test he developed were disproved decades ago. Today, we know that homosexuality is not a mental illness. Additionally, the theory that mental illnesses are expressed in facial features was also refuted. However, the debunked Szondi Test does present us with an unsolved mystery: assuming the story told by Dr. Kulcher is indeed true, how was Dr. Szondi able to diagnose Eichmann’s murderous personality so accurately?