In accordance with Papal law, Jewish families were not permitted to raise Catholic children. Once news of his baptism leaked, Edgardo Mortara was taken into custody by the Vatican. 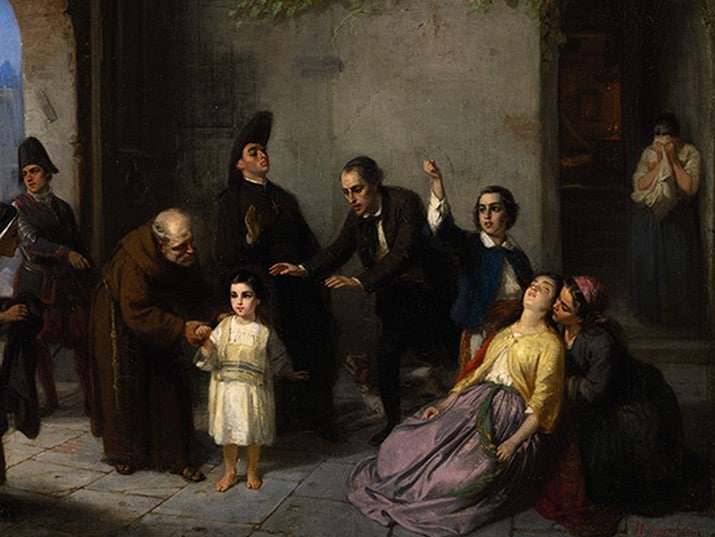 "The Kidnapping of Edgardo Mortara," painting by Moritz Daniel Oppenheim, 1862

It all started with a well-meaning decision. A decision that, without the intention of inflicting harm or pain, would change the lives of an entire family and forever impact public opinion of the Catholic Church.

Edgardo Mortara was born in 1851, the sixth of eight children born to a Jewish Italian family living in Bologna. When he was just a few months old, Edgardo fell seriously ill and, despite his doctor’s best efforts and the desperate prayers of his parents and loved ones, his condition did not improve.

During this time, the Mortara family employed a 16-year-old Catholic maid named Anna Morisi. Anna watched the young boy grow ever sicker. Assuming there was nothing left to be done for the poor child, the young maid took it upon herself to secretly baptize Edgardo in the hopes that, if God decided it was time to take him from this world, at least she would have saved his soul. Without asking for the permission of his parents or considering the potential repercussions of her actions, Anna baptized Edgardo. To the surprise of those around him, the boy grew stronger, conquered his illness and returned to full health.

At least, that was the story Anna Morisi told her priest during confession six years later.

In accordance with his dedication and loyalties to the Church and their rulings, the priest reported the story to the proper authorities who immediately took action. After all, according to the law of the Supreme Sacred Congregation of the Roman and Universal Inquisition, a child who underwent baptism – even unofficially – was undeniably Catholic and the law of the Papal States strictly forbade families of other faiths to raise Catholic children.

The knock on the door came on a peaceful July evening in 1857. The quiet atmosphere of the Mortara home was quickly shattered as papal soldiers stormed the house and seized six-year-old Edgardo, informing the family that their son was no longer theirs to keep. The boy was ripped from the protective arms of his stunned parents and taken directly to the Vatican.

News of the kidnapping of Edgardo and the plight of the Mortara family quickly spread across the globe. Major international figures including the Austrian Emperor Franz Josef I and Napoleon III of France tried to influence Pope Pius IX to return the child to his family to no avail.  The Church insisted that the law was clear: once the boy had been baptized, he was undeniably Catholic and could not be raised by Jewish parents.

Evidence was brought forth proving that the maid was not a trustworthy person and had been dismissed from the Mortara home and the homes of several subsequent employers. The Mortaras denied that Edgardo had ever been seriously ill which made the purpose of the secret baptism completely irrelevant and refuted any right the Catholic Church had to take the child – for if the baptism was never necessary it should not have taken place, leaving the child as nothing more than Jewish.

Sir Moses Montefiore, activist, philanthropist and president of the Board of Deputies of British Jews, took up the cause of the Mortara family, writing letter after letter to communities in America and Europe in the hopes of rallying more support for the Mortara family and to increase the pressure on the Church to return the boy to his rightful home. After several months of advocating in Britain, Montefiore and the Board of Deputies decided that more drastic measures were necessary to gain traction with the Church. He packed his bags and prepared to travel to Rome to try and appeal to Pope Pius IX directly in the hopes of finally reuniting the boy and his family.

Before he left on this mission of vital importance, the Synagogue of the Spanish and Portuguese Jews (the Bevis Marks Synagogue) in London where Montefiore was a participating member, prepared a special prayer that was read during services by the congregation to beseech the heavens for his success. With the prayers of his community to strengthen him, Montefiore and his wife set out on their journey with the knowledge that they were to face many tough battles ahead.

Upon his arrival in the Italian capital city, Montefiore had several of his contacts reach out to the pope on his behalf in an attempt to receive an audience with him. As the days dragged on into weeks, he began to understand that this mission was not going to be a success. Several weeks after his arrival in Rome, Montefiore finally received a response to his inquiry for a papal audience: “To my sincere disappointment,” wrote his contact, “I am informed that the pope would not receive you. His Holiness could not permit any discussion of the Mortara case, it being a closed question.”

In place of a meeting with the Pope, Montefiore was granted an audience with the Cardinal Secretary of State, who, after hearing the pleas of Montefiore, cynically suggested that at the age of 18, the Mortara boy would be given a choice on whether to remain in the Catholic Church or to return to his family but that until then, he would be raised and educated in accordnce with the Catholic faith. Despite what turned out to be a generally unproductive meeting, the Cardinal did agree to allow the Mortaras to visit their son.

Conflicting narratives emerged as to what happened during the parental visits with Edgardo. According to one account, the child would desperately cling to his parents and cry that he wanted to return to his home. The other version of events claimed that the child was enlightened and emboldened by the spirit of redemption and was heartbroken that he could not convince his parents to convert and join his new way of life.

After weeks of effort, Sir Moses Montefiore left Rome and returned home having been unsuccessful in his attempts to meet with the pope. Edgardo Mortara remained unwaveringly in the custody of the Church despite the international attention and pressure imparted on the Vatican.

The Mortara family continued to advocate for the return of their son to no avail. Edgardo Mortara became a priest at the age of 21 having trained under the pope himself from childhood. He dedicated his life to the Church, traveling throughout Europe and preaching his religion, until his death in Belgium in 1940.

Special thanks to Karen Ettinger from the Education Department at the NLI for her assistance in writing this post. Click here to view the NLI Education website.

For additional information on Montefiore’s visit to Rome, read “Anglo-Jewry and the Mortara Case,” available in the National Library collection.