No one knows the exact origins of the little black suitcase filled with hand-written scrolls now kept at the National Library of Israel.

Very little is known about Dr. Max Leopold Brodny’s trip to the Soviet Union in 1959, a trip from which he returned to Chicago with one more suitcase than he had when he left.  The suitcase was small, black, and tattered, but Brodny understood he had received something special and he cared for it and kept in a closet in his home where it stayed until his death in 1979. When dividing Brodny ‘s estate, the suitcase was passed on to his daughter, Eleanor. Like her father before her, she kept the suitcase hidden in her home.

Twice Eleanor turned to Judaica researchers in Chicago but they did not have any insights to provide on the suitcase. It was only when Eleanor approached biographer and writer, Stacy Derby, for help in putting the history of the Brodny family down on paper, that the suitcase again played a part in Eleanor’s life. Eleanor showed Stacy the suitcase and told her the story of how it came into her possession.

The Story of the Suitcase

During his stay in Moscow, Max visited a synagogue. The local rabbi pulled him into a side room and pushed a black leather suitcase into his hands. “It has no future here – take it away and preserve it,” he begged of the doctor from Chicago, “but be careful – we’re being followed.”

Max listened to the request of the rabbi and took the suitcase with him from the Soviet Union. The contents and the back story of the suitcase intrigued Stacy. She turned to a former professor of hers who in turn put her in touch with the National Library of Israel in the hopes that someone could give her a better idea as to what was hiding within it.

The contents of the suitcase and its story also managed to intrigue Dr. Zvi Leshem who received the inquiry. Leshem is the head of the Gershom Scholem Collection at the National Library of Israel, which specializes in Kabbalah and Jewish Mysticism. He, in turn, told the story to Dr. Yoel Finkelman, the Judaica Curator at the library.

The library’s staff discovered 85 different items in the suitcase, the majority of them (76 to be exact) being small amulets made of parchment or paper, designed for magical purposes. Almost all of them had been hand-written in North Africa at the end of the 19th-century or the early 20th-century, with a few of them written in the Land of Israel or elsewhere. This was determined based on the writing style, or on the names written on the amulet scrolls like Salem ibn Gedaal or Sultana Bat Istariliya. In one or two cases, the location of origin was clearly written upon the page (“Here in the Land of Israel”).

All of the scrolls were written to summon angels and other heavenly forces to protect against natural and supernatural dangers. Some were written for health, some to protect a pregnant woman and her child, others to defend the home against danger. 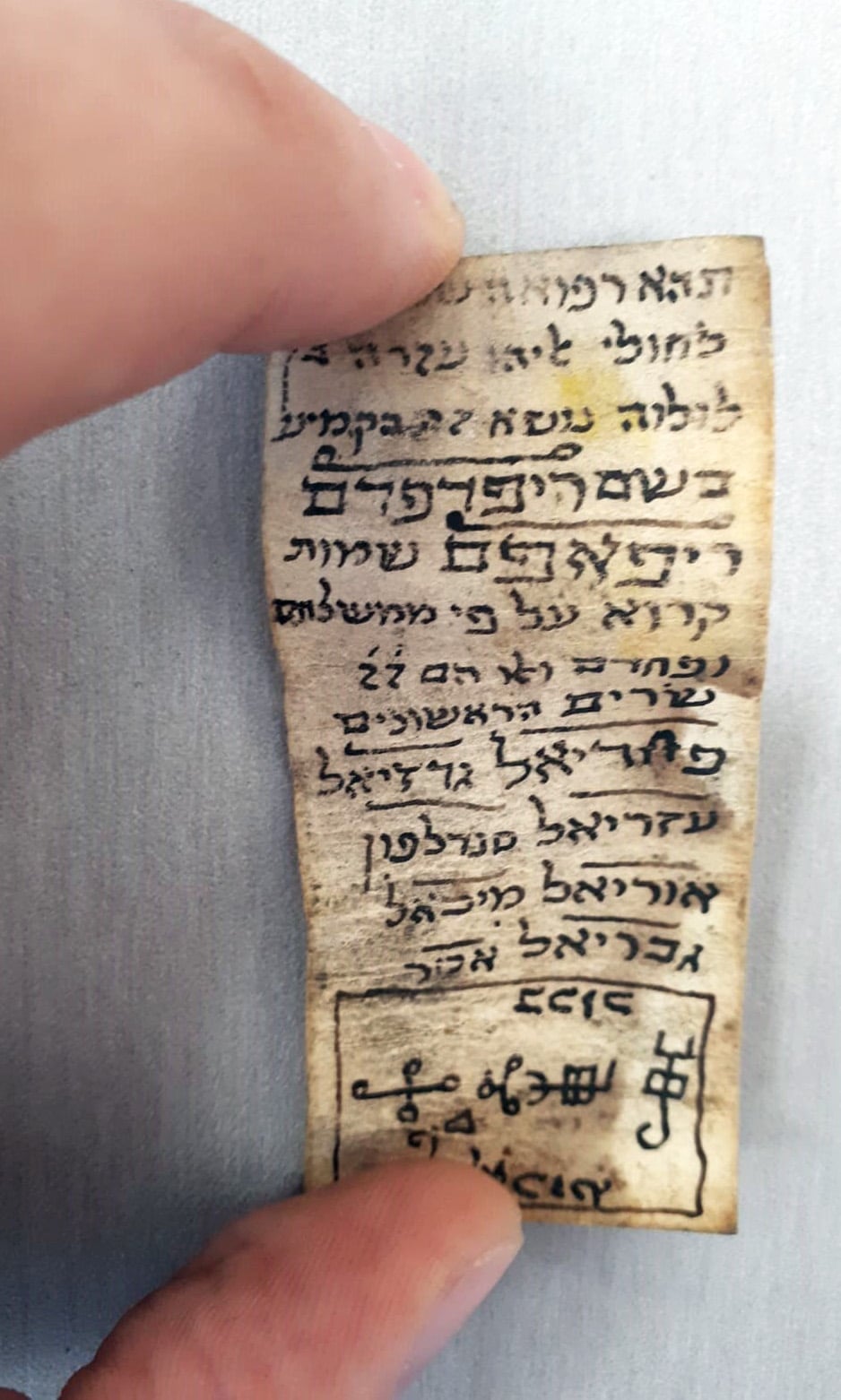 Seventy-six of the scrolls were written on paper or parchment of different sizes – the longest of which reaches close to a meter in length. The scrolls were rolled up tightly (a few were folded) making them easy to carry in a pocket or wallet or amulet. Eleven of them were dyed pink, while others were dyed in darker colors.

Seven of the scrolls were written in greater detail, indicating a higher level of skill, especially those that describe the Sephirotic tree – the map of the divine structure according to the Kabbalah. 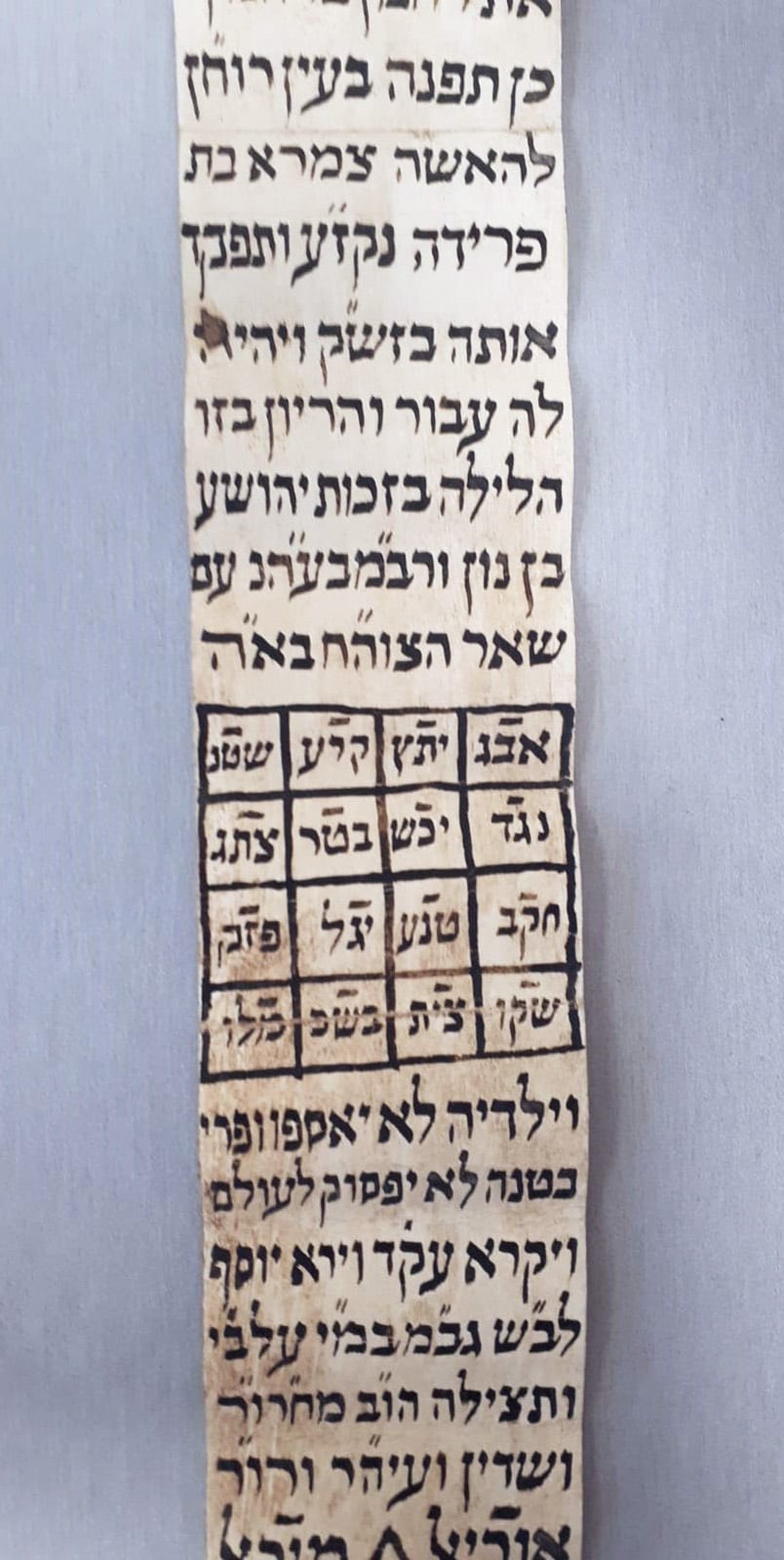 Another fascinating item from the suitcase, dating back to 19th century North Africa, is a manuscript containing various magical recipes describing how to prepare different kinds of scrolls for a myriad of purposes. It is one of the most damaged items in this extraordinary collection, likely because it was used regularly. 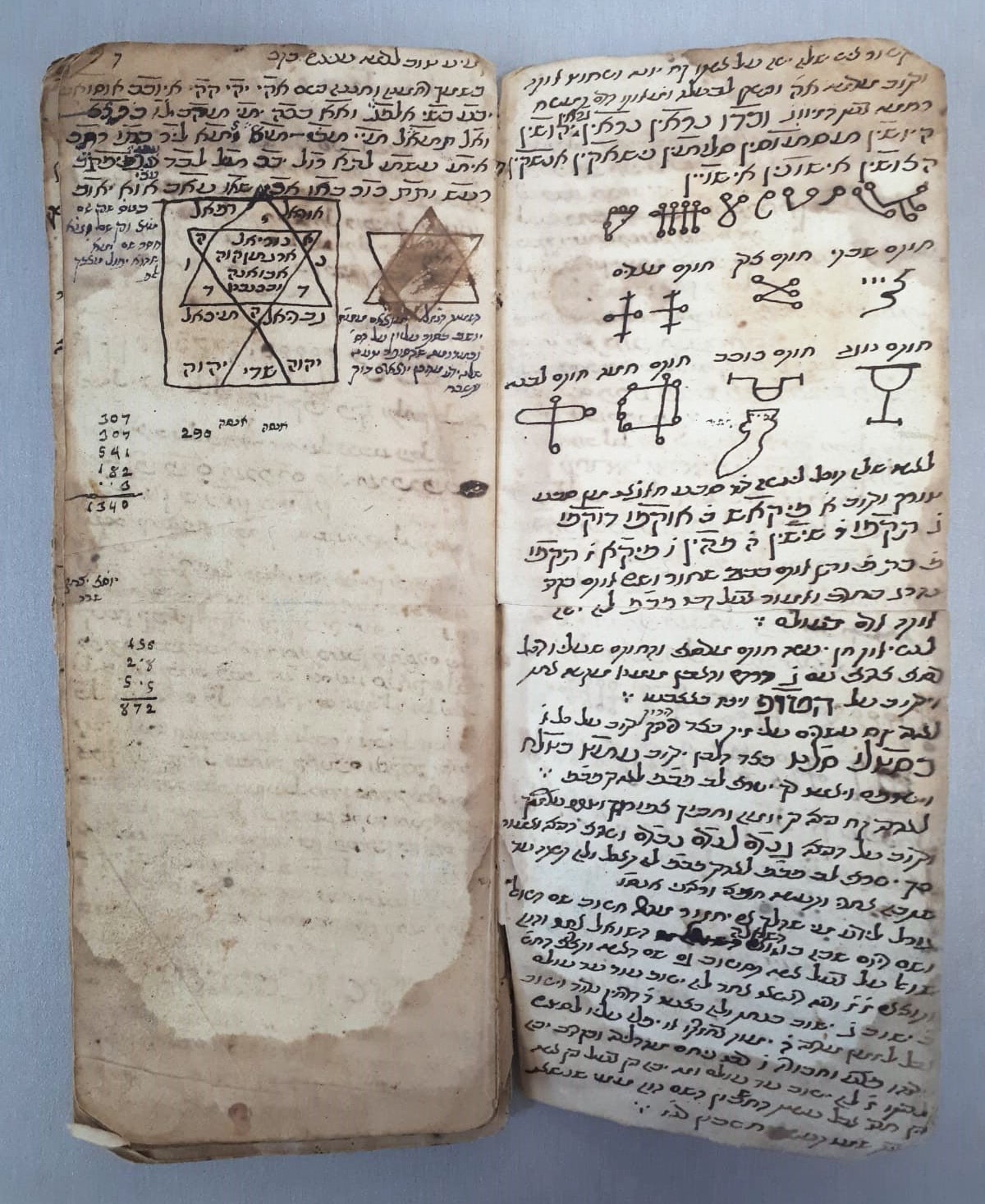 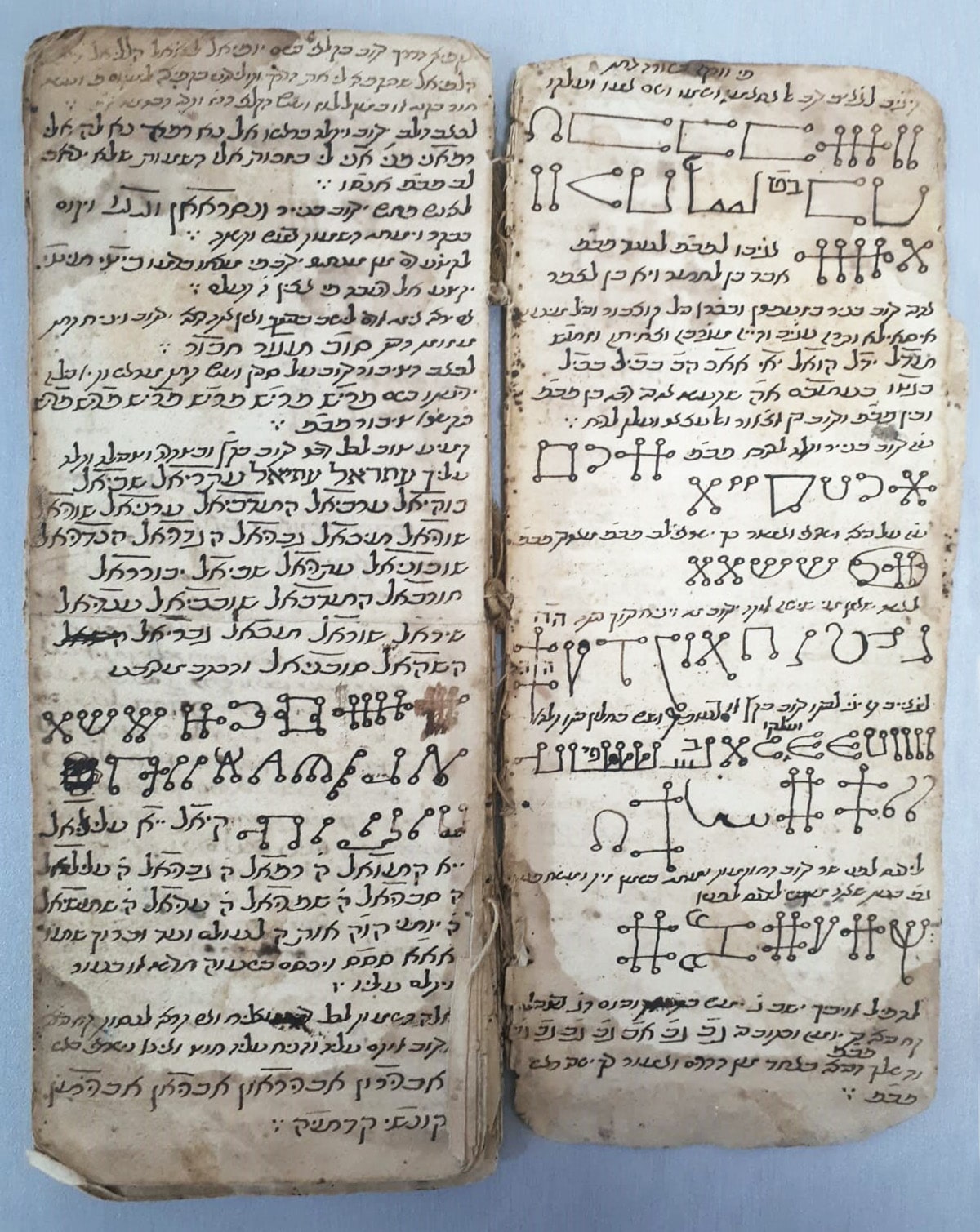 As it is unlikely that we will find any additional information about this mysterious suitcase, there is no way of knowing how this rich collection arrived into the hands on the rabbi in Moscow. The lack of European scrolls of this type suggests that the author of the scrolls was probably not a Russian or Eastern European mystic. It is possible that the collection belonged to a researcher or collector who lived in Moscow, and that it was then left to the synagogue following his/her death.  Still, as they say, your guess is as good as ours.

Even if we never find out who put this collection together, the great distances it traveled (from North Africa and the Middle East, through Russia, then to the United States and ultimately Jerusalem), are evidence of what is today increasingly clear to scholars: Jewish magic is not a trivial or marginal pursuit. Though the story we have shared here has many holes, it shows that Jewish magical practices have a day-to-day nature, both historically and contemporarily.

“Throughout history, Jewish communities have busied themselves with magic and demons,” explained Dr. Yoel Finkelman. 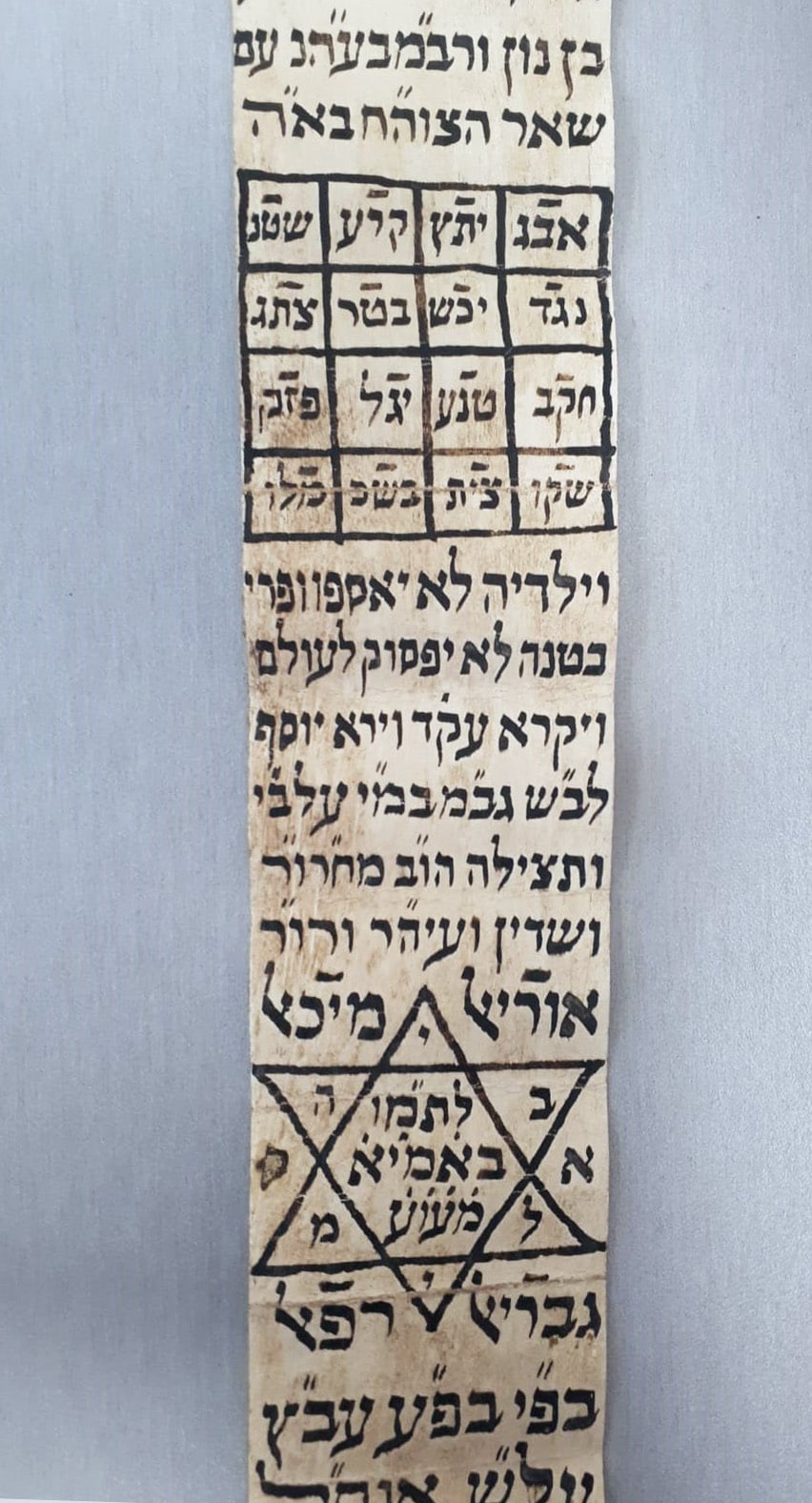 After much deliberation and with the generous help of Judaica scholar David Wachtel of New-York, Eleanor decided to donate the collection to the National Library of Israel in Jerusalem, along with the little suitcase in which it was kept. Two weeks after the suitcase left for Israel, a pipe burst in Eleanor’s home just where the scrolls had been kept for years. Dr. Finkelman joked that perhaps this is a coincidence, but then again, “maybe not.”

It’s not every day that such a significant donation arrives in the manuscript collection of the National Library. The collection is currently being cataloged, after which it will be scanned and put online, making it accessible to the general public and to researchers of Jewish magic and mysticism – a field that is currently flourishing.

“In donating the collection to the National Library of Israel,” said Eleanor, “we have fulfilled the request of the rabbi from Moscow.”