In 1935, a photojournalist was sent by a Jewish news agency to document the growing anti-Semitism under the rule of Nazi Germany. 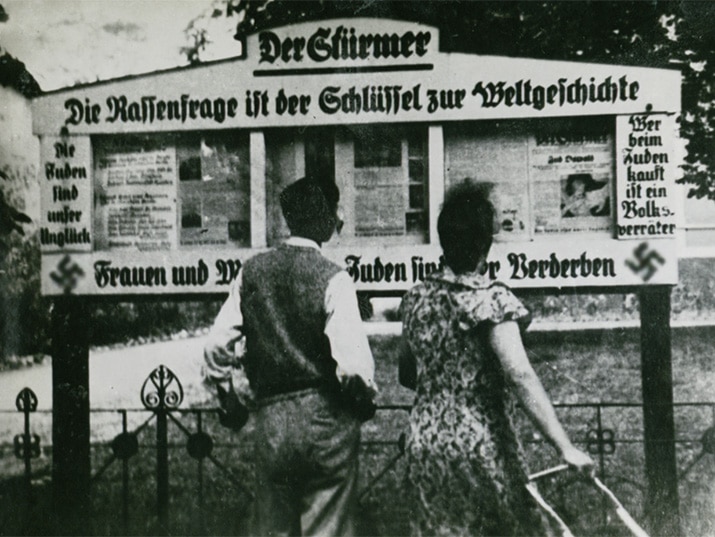 Reading articles and announcements at stand of the Nazi newspaper, "Der Stürmer."

In January of 1936, a photo album arrived at the National and University Library. The album was sent to Jerusalem by the head office of the Jewish News Agency in Amsterdam. It was not a large album and contained just twenty-two photographs. Each image in the album documented a sign that was hung in condemnation of the Jews, a public declaration of anti-Semitism and hatred of Jews in Germany, providing a simple snapshot of life under Nazi rule as documented in the autumn of 1935.

The photographer’s name did not appear in the album and seemingly was not preserved through the upheavals of history.  The photographer, a Dutchman who rode his motorcycle from the county of Bentheim on the Dutch-German border, through Hamburg, all the way to Berlin, covering a distance of 500 kilometers, was sent by two Jewish journalists from Holland named Hans Reichmann and Alfred Wiener.

The pair established the Jewish Central Information Office in Amsterdam in 1929 with one goal in mind: to document the true nature of Nazi Germany as it was revealed and to make evident the Nazi treatment of the Jews to the world. The staff of the Jewish Central Information Office hoped that disseminating the pictures would rally public opinion and remove any doubts regarding the nature of the racist regime that had successfully come to power under the leadership of Adolf Hitler.

But it seems that they failed at their mission. The photos were indeed publicized throughout the world with a copy of the album successfully reaching even the far off Land of Israel, but the hoped-for resonance was not achieved and the world paid no mind. It was surely a naïve hope on the part of Reichmann and Wiener that these images would have their intended effect.

In 1939 Reichmann and Wiener were forced to halt their activities, and consequently, they emigrated from Amsterdam to London. It was there that Alfred Wiener donated his collections to an institution that later became the Wiener Library, now one of the most important documentation centers in the world for the study of anti-Semitism and the Holocaust. Another copy of the album now resides at the Wiener Library, testifying to the courageous attempt of a group of brave German Jews to alert the world and arouse public opinion against the crimes of the Nazis three years before the outbreak of the war.

When delving deeper into the background of the seemingly simple photographs showing roadside signs and other posters from the entrances to small and large localities alike, we learned that the photographer did not document official Nazi policy. What becomes apparent from the photographs is that the residents of Germany themselves prepared the signs and placed them in their own environments as a way of expressing their personal sentiments towards the Jewish minority.

“We do not want to see Jews, Jews are the source of our trouble, they feed off of our bodies.”

“Jews are not wanted here.”

Recommendations for where the Jews should go instead were also posted:

“The road to Palestine does not pass through here.”

“Jews: Immigrate to your land – in our land, we already know you.”

Not one such sign was required by law. All of them were posted as an expression of authentic local and national sentiment – stated clearly in block letters without any reservation or apology. These signs which espoused a genuine hatred of Jews, the perspective that the Jew is a foreigner from another land, and complete rejection of the Jews, gave a clear indication as to the dark future ahead.