Were the ancient headstones sold or stolen and who was responsible for their disappearance? 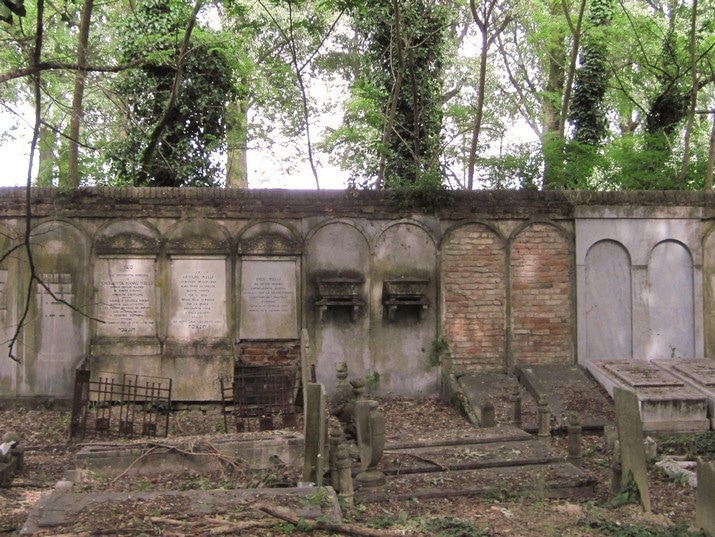 The Jewish Cemetery of Ferrara, Photo by Lungoleno

The Pinkas of the Spanish Levantine School is one of fourteen community registers produced by the Jewish Community of Ferrara in Italy which have been preserved to this day. The manuscript, now housed in the National Library of Israel, holds the protocols and deliberations of the town’s committee meetings from April 23, 1715, to February 18, 1811.

When studying the manuscript, the word “cimiterio” (cemetery in Italian), makes multiple appearances. These occurrences provide interesting new information regarding the cause of the almost total disappearance of the ancient matṣevot (Jewish headstones) from the Sephardic cemetery of Ferrara, currently located on Via Arianuova. The sepulchral ground used by the Spanish and Levantine community is mentioned in 35 acts of the Pinkas, of which 13 are centered on the renewal of the appointments of the caretaker assigned to it.

It is highly unlikely that the considerable number of tombstones presumably present in the two Sephardic cemeteries of Ferrara, the old and the new, went missing by chance. The transcript of the council meeting on April 8, 1717, features the defense of a person accused of stealing and selling sepulchral stones from the Sephardic Community of Ferrara to the local municipal authorities of the time.

The Community Council offered a defense for Isacco Lampronti against unjust accusations of the theft and sale of cemetery gravestones. His accusers alleged that he committed these crimes on his own initiative, but the council claimed that the marble stones were sold by the same congregation in 1705 and 1706, in order to make a financial profit.

The first name that appears among the buyers of the missing headstones is that of Scipion Sagrati, who held the high office of Judge of the Savi, and who purchased the marble in order “to repair the floods of the water.” In 1705, Ferrara was damaged by a disastrous flood, called “the highest of all,” caused by the flooding of the Po and Panaro Rivers. Judge of the Savi, the Marquis Scipione Sacrati Giraldi, took preventative measures to avoid damages both before and during the flooding.

In order to prevent the ruinous entry of water into the city, the Sacrati walled the Porta degli Angeli, one of the main city gates sparing Ferrara the fury of the flood. It is very probable that the Marquis Sacrati had an urgent need to acquire some material to wall up the ancient city gate and he therefore lawfully purchased the Jewish burial stones for this purpose. Another possible hypothesis is that the Judge of the Savi may have instead obtained and used the Sephardic tombstones after the long flood to “close the routes, and repair the river banks.” Moreover, it is attested that on 28th June 1706, about a year after the violent flood, the same Scipione Sacrati Giraldi generously donated two octagonal wells to the city of Ferrara made at his own expense with the marble reused from the gravestones of the Jews.

The second name that appears in the Pinkas testimony is that of Cardinal Del Verme. This is the Cardinal Bishop Protempore Taddeo Luigi Dal Verme, Bishop of Ferrara from 1701 until 1717, the year of his death. His relationship with the Jews of Ferrara was slightly ambiguous, so much so that, during his episcopate, his edicts forbade honoring the dead with tombstones. From the lines written by Abbot Girolamo Baruffaldi, we learn of an episode related to the construction of the extravagant Archiepiscopal Palace commissioned by Tommaso Ruffo, former Cardinal Legate and future first Archbishop of the city. According to the Pinkas, the Archiepiscopal stable was paved with tombstones stolen under the cover of darkness from the gardens where Jews were buried.

While Baruffaldi, who was alive at the time of these events but who was often outspoken against Jews, writes of a theft, the minutes of the council meeting of the Spanish Levantine School of April 1717 testify instead of an explicit sale of the headstones made by the Jewish community to the Bishop of Ferrara. What is certain is that Dal Verme, having obtained the Jewish tombstones, gave them to Cardinal Legate Ruffo who then used them to pave the stables of his many horses.

The shortlist of well-known buyers ends with Emigliano Travaglioni, who purchased the headstones “for the purpose of the fortress in the year of the blockade.” Abbot Emiliano Travaglini was the Commissioner of the Apostolic Chamber of Ferrara during the year 1708, which was emblematically defined “the year of the blockade” as the city was besieged and blocked for many months by the Austrian imperial troops. Despite the fact that the city of Ferrara had been isolated, there was still a large armory inside the Pontifical Fortress, the imposing pentagonal headquarters of barracks, powder magazines and deposits of papal arms. During the imperial siege, while awaiting the arrival of troops and materials from Rome, it was only possible for the people of Ferrara to strengthen the fortifications with that which was available in the city. It is precisely in this particular context that the purchase of Jewish sepulchral stones was carried out by Abbot Travaglini. The headstones were likely to be used to reinforce the defenses against the enemy at the gates.

There are only three people mentioned as buyers of the marble stones of the Spanish cemeteries but the list should certainly be longer. In fact, the list as mentioned in the Pinkas ends with “and others,” making clear reference to other incalculable and unknown buyers.

The root or reason for such a serious accusation – the theft of Jewish headstones – aimed at a well-known and influential character of Ferrara of the time (Isacco Lampronti) remains unknown. It is possible that it was personal resentment that led Isach Saralvo and his sons to make such an accusation against the famous doctor, but the framework of the story and its origins are still very blurred. Even the date of this “criminal accusation” may not have been by chance. In fact, due to a strange and not accidental conjunction of years, there is a theory that this controversy is connected to the reconstruction of the Borso d’Este column.

In 1472, a column supporting the statue of an enthroned Duke Borso was placed on the left side of the entrance of the ducal court of Ferrara, in front of the Cathedral and next to the column with the equestrian monument of Duke Nicolò III. On December 23, 1716, a fire broke out in the surrounding shops and the column suffered serious damage. In 1718, sources attest that, in order to restore it, the city authorities ordered many marble burial headstones to be removed from the Jewish cemeteries, and provided payment to the Ghetto’s caretaker.

The story of the reuse of Jewish gravestones for the column, soon abandoned by historians, was lost to time. It was only in 1960, during a restoration of the Borso column, that a photographer successfully captured fragments of Hebrew writing embedded in the structure. The photographs show 36 fragments of tombstones in which Hebrew characters, noble coats of arms and elegant floral decorations are visible. The dating of the stone material shows they come from a chronological period between 1557 and 1680. It is very difficult, especially due to the loss of the auditing book of 1707 and the often conflicting documentary sources, to establish with certainty if the tombstones were indeed deliberately sold by the Jewish community or if, as was often known to happen, they were forcibly removed or taken under special municipal injunctions.

The data contained in this precious documentary source has made it possible to clarify an unusual aspect of the history of the Sephardic Jewish cemeteries of Ferrara, cemeteries that are almost totally void of ancient sepulchral stones, which appear to have been reused in various manners over the long history of the city of Este.