Where did one go to watch a movie in British-Mandate era Jerusalem? Where could you catch a bus? And what were the popular hot spots? Presenting the map that resurrects pre-state Jerusalem...

Not many maps are capable of visually resurrecting a city. The task is even more challenging when that city is Jerusalem, and not only that but Jerusalem as it appeared eighty-eight years ago. Rare are the maps that show us not only a schematic of a street grid, but also depict buildings, cultural and recreational institutions, as well as government structures, in a detailed and aesthetic fashion. Maps that place a picture of life in Jerusalem as it once was before our eyes. Such are the hand drawn Jerusalem maps of Spyro Spiridon.

But who was Spiridon?

Prof. Kobi Cohen-Hatav has traced the course of Spiridon’s life: He was born in Jerusalem in 1894 and, in his later years, served a President of the Greek Orthodox Society in the city. In his twenties, Spiridion studied electrical engineering and civil engineering in Switzerland. During his time there, he was exposed to a new style of modern tourist map that was becoming popular in the country. When he returned to Jerusalem, Spiridon struggled to make a living in his field and decided to focus on something entirely different – he set out to create a map that would express the urban space of Jerusalem in three dimensions.

His map was published in the 1930s. The very first tourist map of Jerusalem, it was originally printed by the Greek Orthodox Church and, later, by the Goldberg Press.

Below are some stellar examples from Spiridon’s map. Please feel free to click on any of the images to enlarge.

The “Horva” and “Tiferet Yisrael” synagogues: 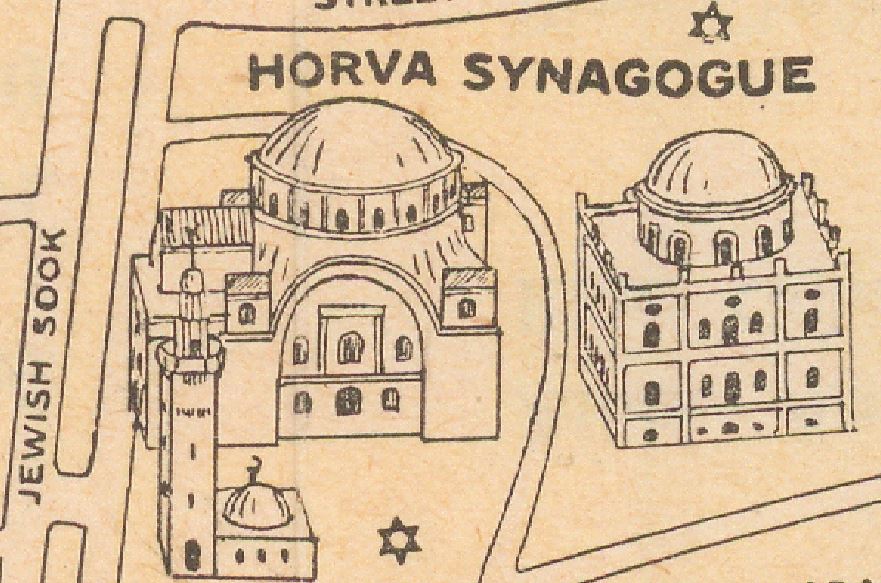 Spiridon designed a detailed key which marked the religious affiliations of various buildings in the city: 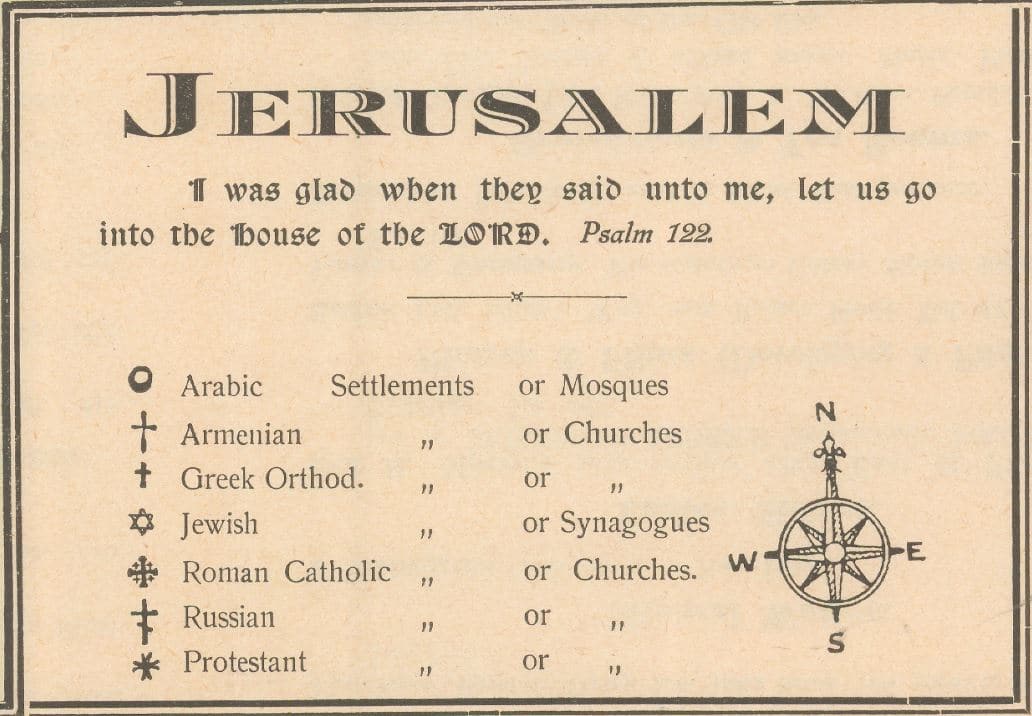 Neighborhoods that once existed are reconstructed before our very eyes – here are the houses of the Yemenite neighborhood Ezrat Nidahim in Silwan, accompanied of course, by a Star of David symbol: 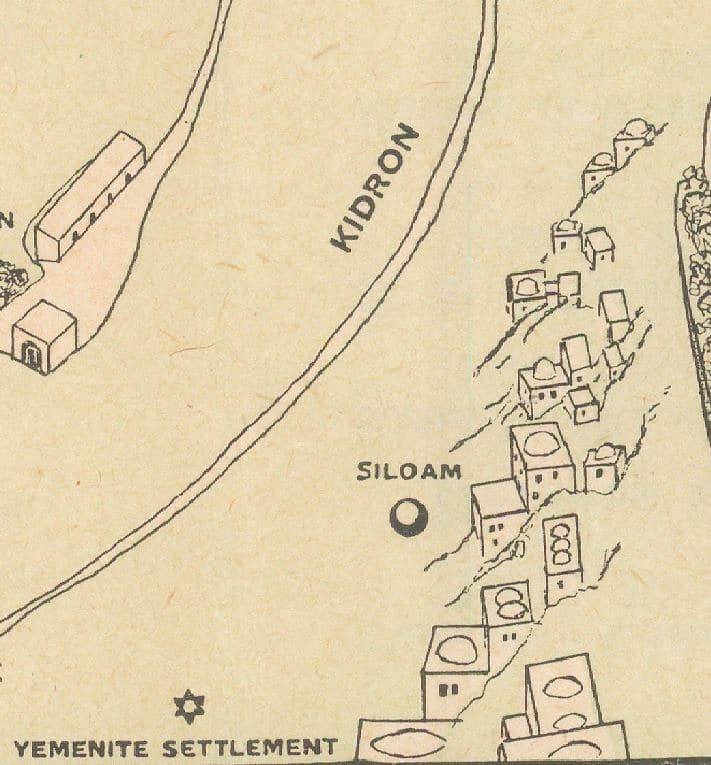 Here is Djort al-Enab, once a neighborhood of Mizrahi Jews just outside the walls of the Old City, near the present-day location of the artists’ quarter of Hutzot Hayotzer: 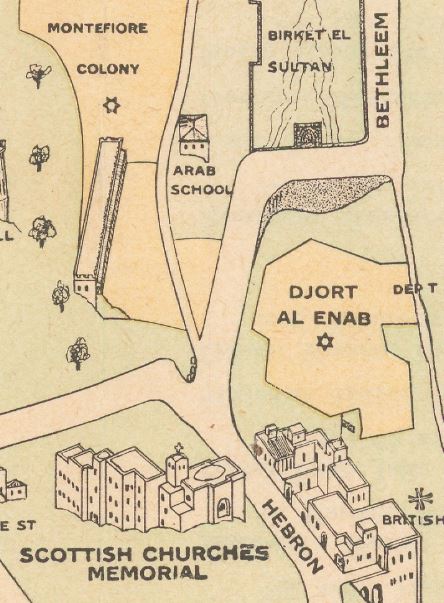 The Amireh neighborhood on the outskirts of Rehavia: 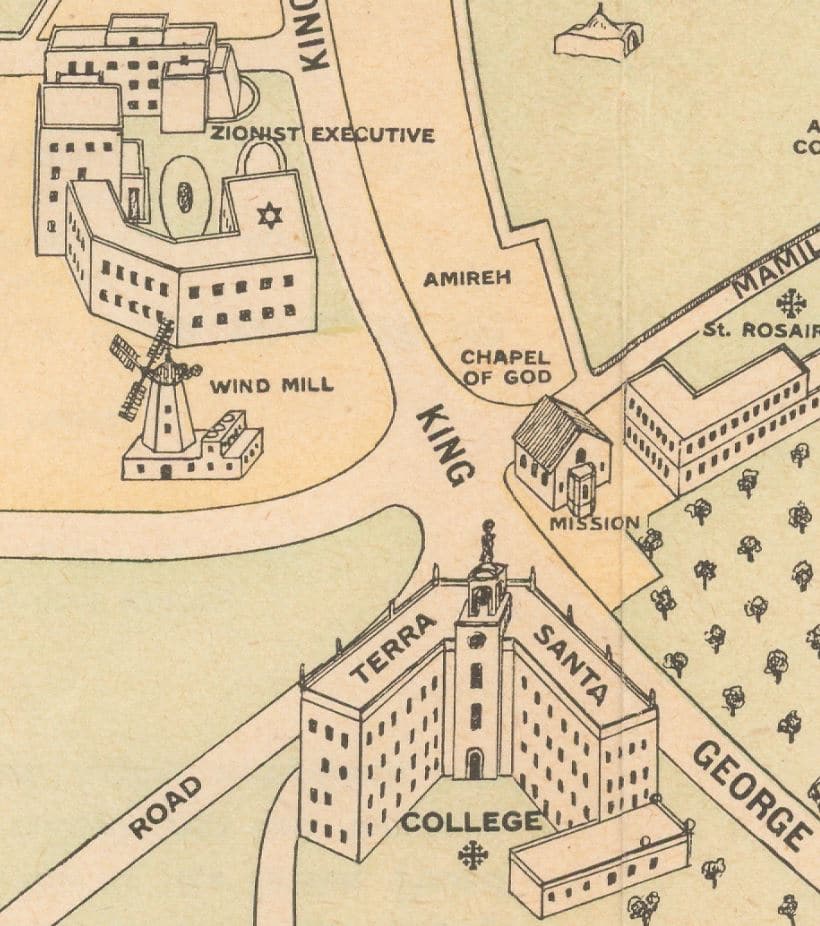 Some of the buildings are depicted in impressive detail – Hansen House, once a Leper hospital, is today a cultural center and museum: 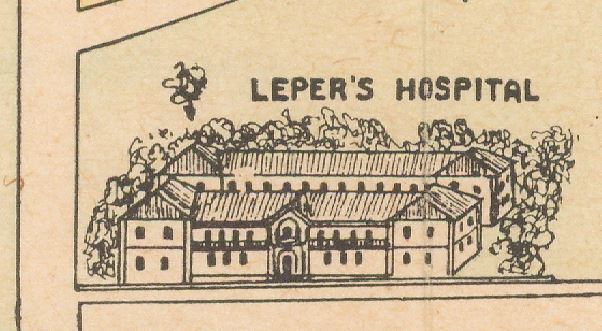 The clock tower, which stood until 1934 near the present-day Jerusalem City Hall compound and St. Louis French Hospital:

The luxurious Palace Hotel (today the Waldorf Astoria Hotel stands in its place) opposite the Mamilla Pool, next to the US Consulate: 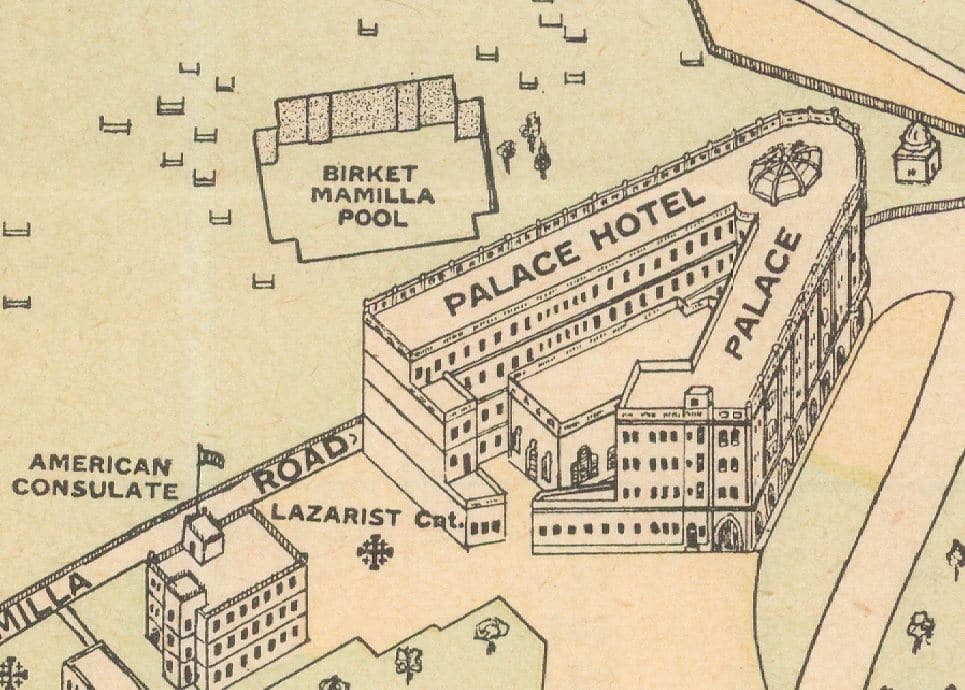 The Lemel School opposite the Edison Cinema, referred to here as the Opera House: 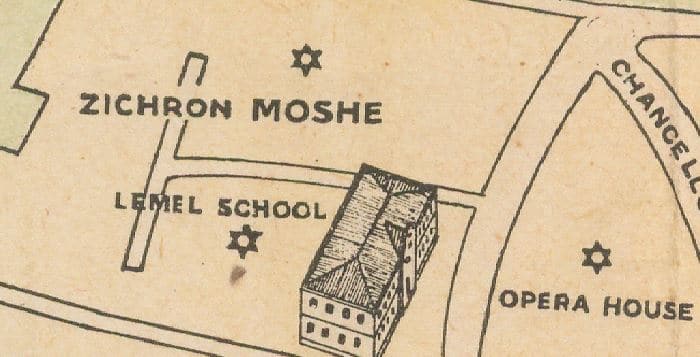 In the 1945 edition of the map, we see that drawings of buildings continue to occupy a central role. It is interesting to note that the map is east-oriented, an unusual orientation for maps of Jerusalem:

Most of the inscriptions on the 1945 map are in English, except for a few instances where a community-adapted caption was utilized – a small inscription in Russian in the area of the Russian Compound, a few Arabic inscriptions in the Old City and in the eastern parts of the city, Greek inscriptions in the Greek Colony and three Hebrew inscriptions – the Meah Shearim neighborhood, Ben Mimon Street and the Zichron Moshe neighborhood which houses the Edison Cinema Building: 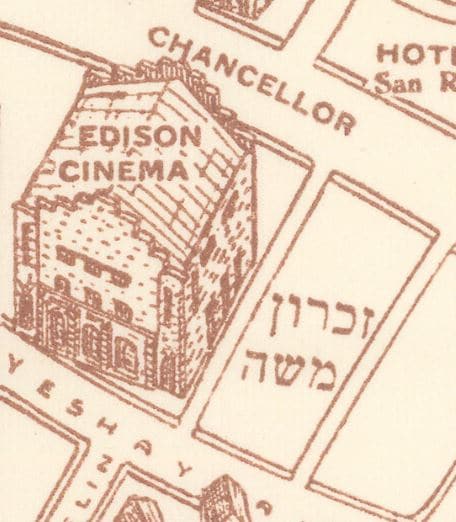 Here we can see the Alliance school, where the Clal Building stands today: 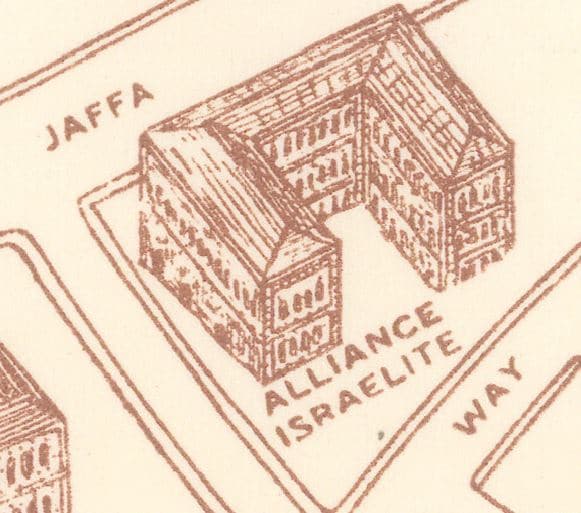 In the center of the city you can see the Egged central bus station, where the “Jaffa Center” light rail station is located today. You can also see the Zion, Eden and Orion Cinemas. Also depicted are the famous cafés of the time – Café Vienna and Café Europe: 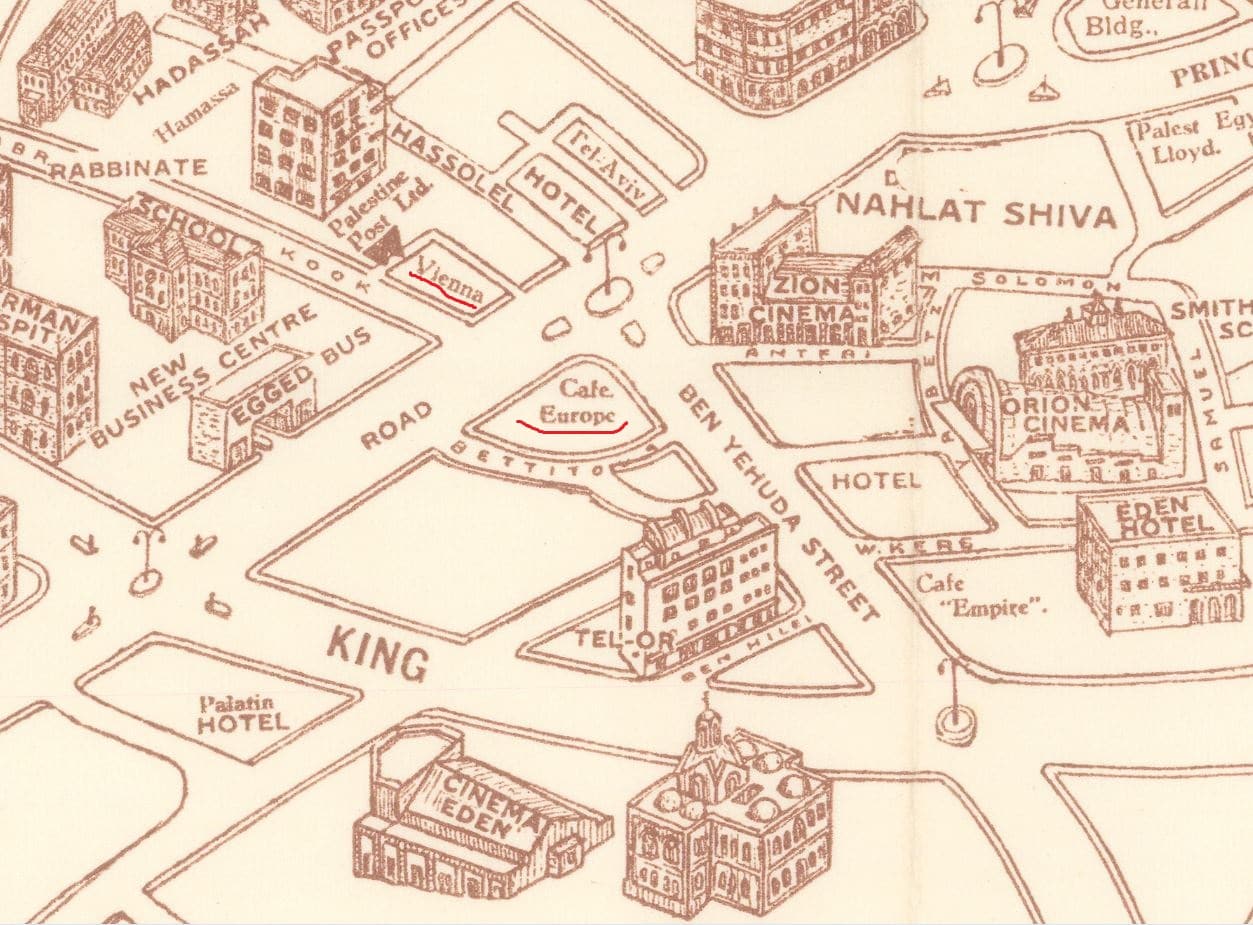 Not only do the cinemas in the center of the city center receive special attention, the Regent Cinema in the German Colony also has its place on the map (known today as Smadar Cinema): 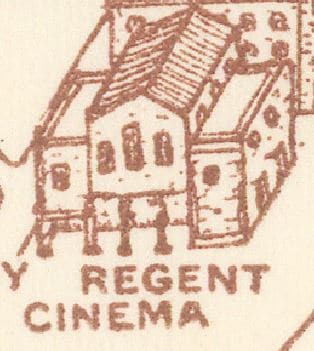 In the Talbieh neighborhood there is a drawing of a leper house known as Moravian Home, and we can also spot the consulates of Turkey, Iran, Spain and Greece: 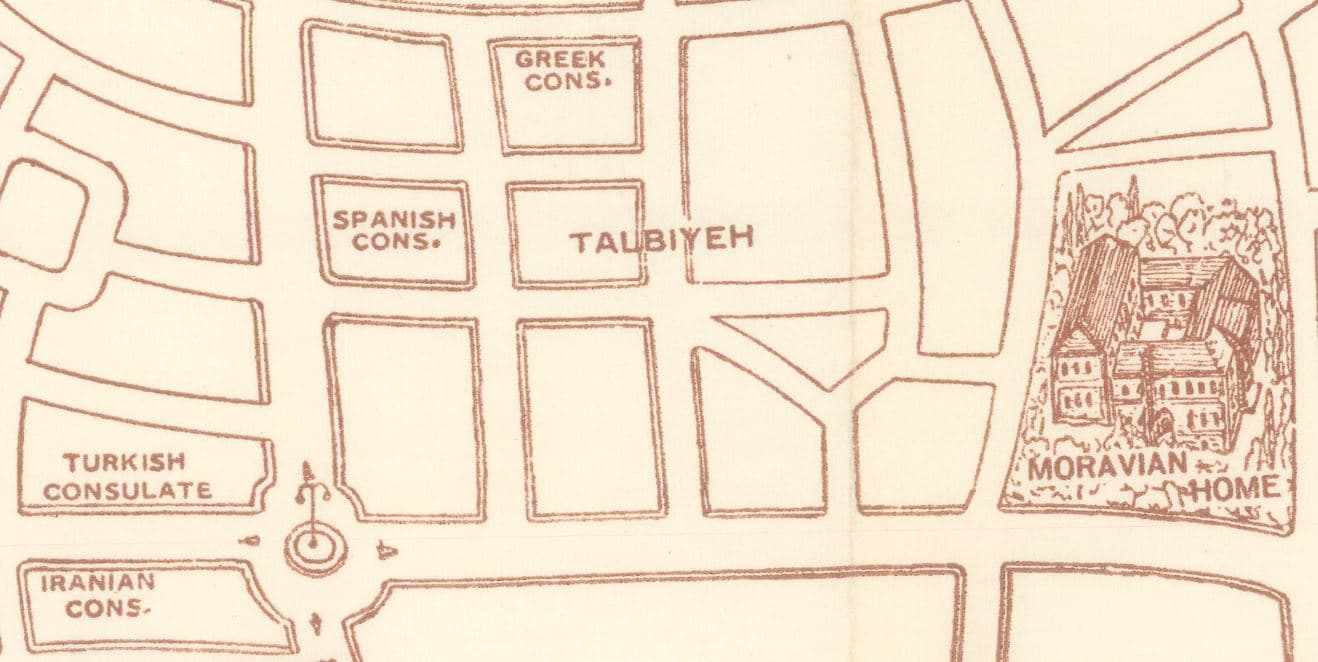 The consulates of Iraq, Lebanon, Egypt, Switzerland, and Czechoslovakia were located west of the Greek colony in the Katamon neighborhood: 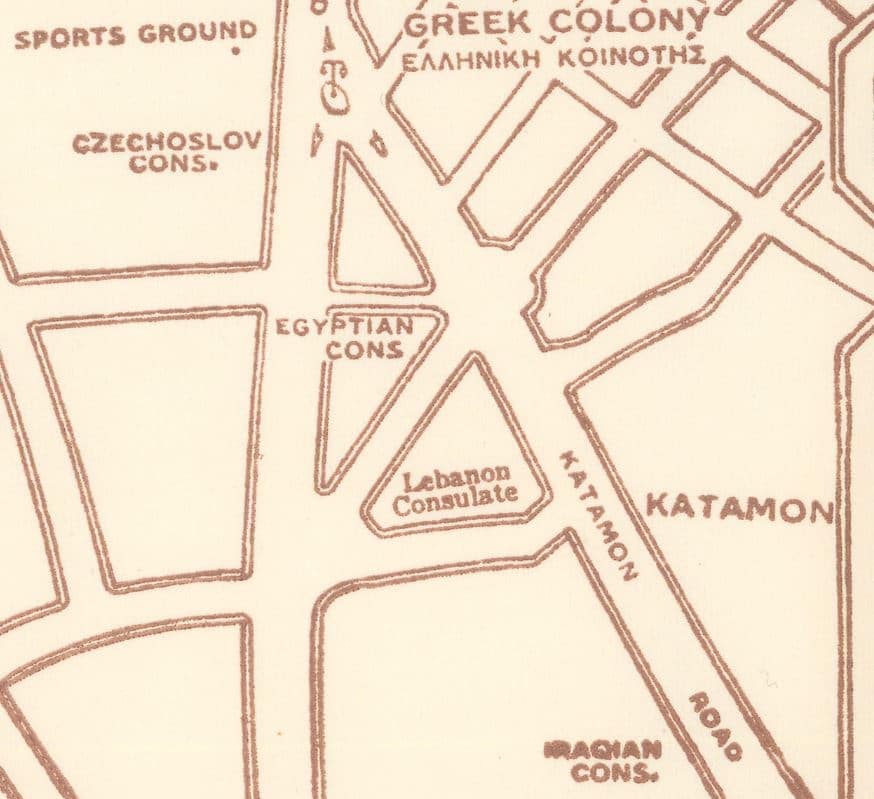 In south Jerusalem, the map extends as far as the Dead Sea and includes the potash factory on its northern shore, King Herod’s desert palace of Herodium, and Government House, the seat of the British High Commissioner which serves today as UN headquarters: 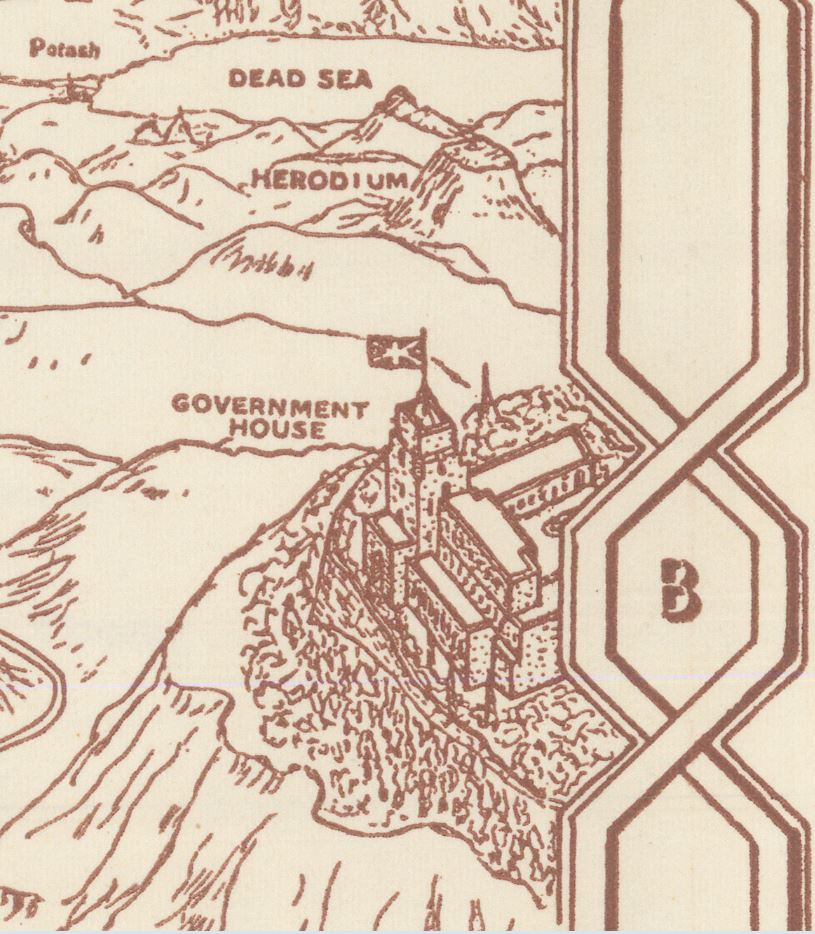 The Hebrew University compound on Mount Scopus features a drawing of Beit Wolfson, home of the National and University Library at the time:

The Citadel and police headquarters in the Old City: 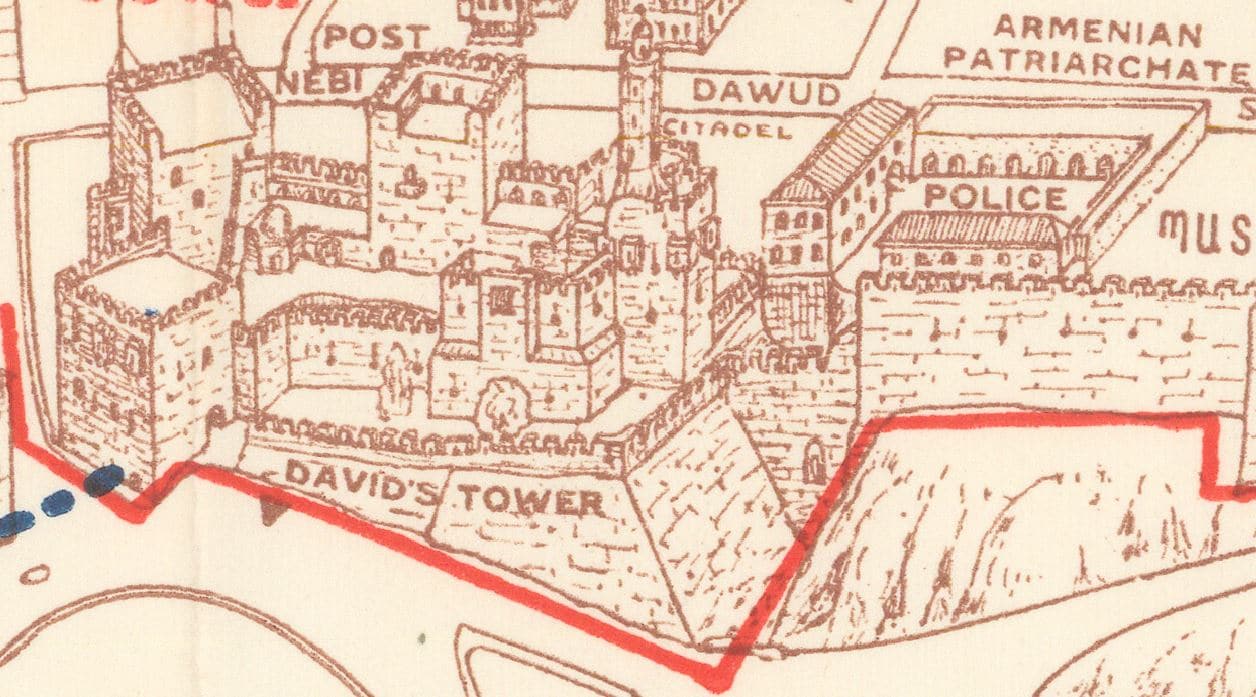 The map shows the names of streets as they were known during the British Mandate:

Perhaps due to the Greek origin of the author of the map, the area of the Greek Colony is very detailed:

The Greek Club = next to Avner Street 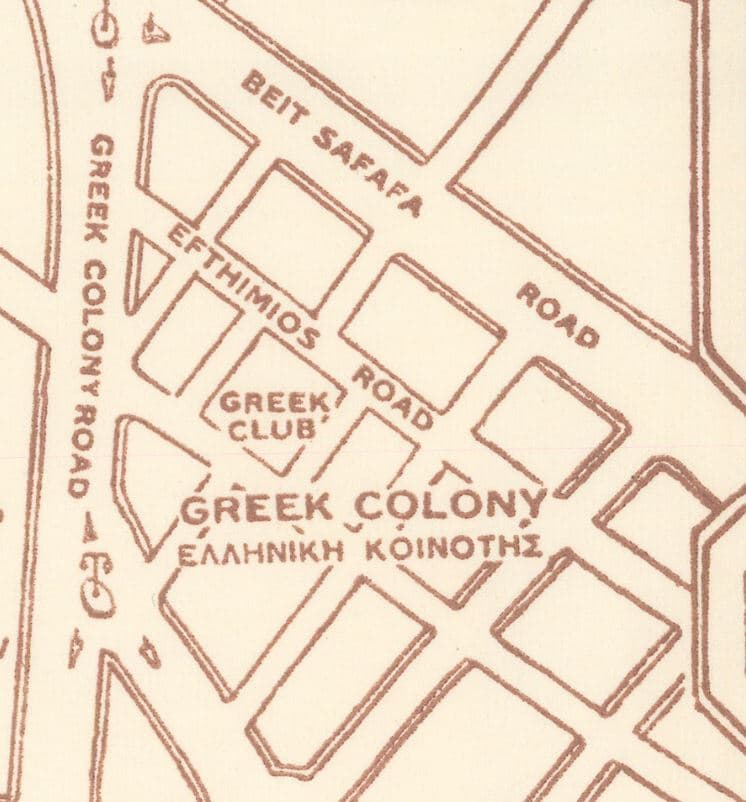 Information about Spiridon’s life and work is attributed to the work of Prof. Kobi Cohen-Hatav.