Confidential papers seized during a British special-forces raid in Norway in 1941 offer a glimpse into the inner workings of Nazi military occupation. They were originally published that same year by the British Government. 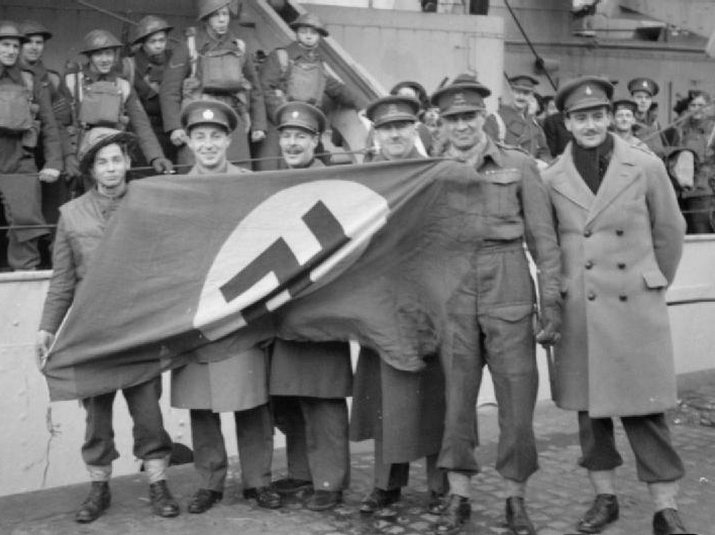 Leafing through the frayed pages of the old, brown booklet, one large German word, its letters appearing in dark, bold print, jumps out at the reader : GEHEIM!…Secret!

These papers were not meant to be seen by unauthorized personnel. They relay instructions from high ranking German officers in the Wehrmacht to rank and file soldiers engaged in the occupation of Norway. The language is laconic and to-the-point, as befits military documents, but there can be no mistake: The instructions were written in the spirit of National Socialism.

The orders appearing in the booklet essentially form a brief, practical manual on how to take over a democratic country and suppress its population.

The story of this stash of confidential German military documents takes us back to the early stages of World War II.  The Miracle at Dunkirk, where over 300,000 soldiers were barely evacuated to safety, was still fresh in the memory of the British population. France, Belgium, Holland, Poland, Denmark and Norway were all already under the Nazi boot. British Prime Minister Winston Churchill was preparing his country for the long and difficult fight ahead. The situation was dire and the national mood was grim.

This was the setting for Operation Claymore: a large-scale raid by British special-forces on the Norwegian Lofoten Islands in 1941.

In the early morning hours of March 4th, hundreds of British commandos quietly entered the Vestfjorden. They immediately set about destroying German-controlled ships, some of them laden with thousands of tons of cargo. The main objective of this mission, however, was something else: fish oil. This substance was being shipped at a rapid pace from Norway to Germany, where glycerin would be extracted from the oil to be used in the production of powerful explosives. Around 800,000 imperial gallons of fish oil were set alight during Operation Claymore as the commandos descended upon factory after factory.

The Germans were caught by surprise – 228 prisoners of war were captured in the operation. In addition, the ranks of the free Norwegian forces were strengthened by 300 volunteers who jumped at the chance to join the war against fascism, boarding the British ships as they began their return voyage. Perhaps most importantly – the commandos managed to seize the rotor wheels of an Enigma cypher machine and several code books, which would help Allied ships to avoid German U-boats for some time.

“My congratulations on the very satisfactory operation” wrote Churchill in a memo addressed to all those involved after their safe return. The large British force had suffered only one injury. The operation provided a badly needed boost for Allied morale and the Norwegian volunteers proved “that the people of the Occupied Territories were still spiritually with us in the fight.”

There was another interesting find among the items seized in the raid: German documents captured at the military Harbor Control Post at Svolvaer.  These secret papers addressed to German soldiers stationed in Norway provided a glimpse into the nature of Nazi military occupation and what life was like under it. The documents were quickly translated and published in the form of a small booklet by the British government that same year. A rare copy of the booklet, complete with facsimiles of the original documents in German, has recently been found in the archives of the National Library of Israel.

The papers show that the Norwegian people did not make things easy for their German occupiers: “Appearances would indicate that the temper and attitude of the Norwegian population have recently stiffened against our endeavors” wrote General Nikolaus von Falkenhorst, the commander of German forces in Norway in one of the documents.

When Hitler notified von Falkenhorst that he was to be in charge of the invasion of the Scandinavian country, the Nazi leader ordered the general to have a basic plan ready by 5 pm that same day. On the way back to his hotel, with no time to consult military charts, von Falkenhorst stopped by a local shop and purchased a Baedeker tourist guidebook of Norway. He planned the invasion in his room that afternoon using the maps in the tourist book. Hitler promptly approved the plan.

In his written address to his troops, the general surprisingly called for calm in the face of Norwegian stubbornness: “…it has become necessary, and it is more than ever urged, that restraint and caution be exercised.” Von Falkenhorst ordered his soldiers to avoid all political discussions or controversies (these matters were the responsibility of the Gestapo, not the army). But there was less tolerance whenever a threat emerged against troops or army property:  “In such cases […] Military force should be brought into action in its full severity […] where action is taken it must be ruthless and employ the severest measures“.

A separate document from the collection offers a string of examples of various possible “offences” by the local population, along with the acceptable response to be taken by German soldiers.

A German National is insulted or struck because he is German.

Provisional arrest of the culprit if he is caught in the act.

A local commander is informed on a Wednesday that on the previous Tuesday a German National was struck.

A Norwegian girl of friendly disposition towards Germans has her hair cut short.

Provisional arrest of the culprit, but only if caught in the act, or if strongly suspected of attempting to escape. In other cases report to the Security Police.

Public statements by fortune tellers or members of sects derogatory to Germany.

In cases of serious insults, for example, in respect of the Fuehrer, provisional arrest, otherwise report to the Security Police.

Subversive preaching by Ministers of Religion either in the pulpit or at the graveside.

Particular restraint and caution necessary. In all cases only report to the Security Police.

We can see from the above that even those who were merely suspected of even the slightest offence against the German occupiers would soon attract the attention of the Security Police, the Gestapo, which did not bode well for those under suspicion.

Another document makes clear that “All political parties in Norway, together with all branch and subsidiary organisations are dissolved and forbidden […] the Nasjonal-Samling, with its affiliated branches and organisations, is the only exception to these prohibitions. Its activity is subject to no restrictions.“

The Nasjonal Samling was a far-right Norwegian political party that had never been able to gain even a single seat in the Storting, the Norwegian parliament. The German army however, was ordered to aid its transformation: “No difficulties, either of a personal nature or of organization, must be allowed to obstruct the granting of every aid in building up the Nasjonal Samling.” The party’s founder, Vidkun Quisling, was appointed Minister-President of Norway by the German authorities in 1942. He would serve in that role until the final Nazi defeat more than three years later. To this day, the world “quisling” is synonymous with “traitor” in several languages. Knut Hamsun, the Nobel Prize winning author, was another of the few Norwegian Nazi sympathists, who even eulogized Adolf Hitler after his death.

One of the most interesting documents in the collection relates to the handling of the local Norwegian press, which was ordered to “publish only such news as is designed to further, or at least not to hinder, the policy of the German Reich“.

Here are some of the specific directives included in the document:

German and Italian official communiques must be published daily and, wherever possible, on the front page.

The greatest care must be taken in publishing every sort of report that it contains nothing that might lead to unrest among the population in any way.

All reference to former political questions in Norway (the question of the King, the Nygaardsvold Government, the Party System, Trade Unions &c.) is forbidden.

In publishing German news and news from countries with which Germany is at war, preference has to be given to German news. This extends to typography as well (make-up, head-lines, size of type, etc.).

Weather reports are absolutely forbidden. In this category are included weather surveys dating back over long periods, damage through bad weather, lightning, temperature, snowfall, and indirect reference to weather in sporting news.

Reports on economic matters, regardless of whether they are short announcements or detailed surveys, must avoid showing the slightest negative tendency.

When reporting on domestic politics in Norway:

All attacks on the German authorities, either in direct or veiled form, must be suppressed.

The following reminder to encourage an optimistic and happy atmosphere was also included:

Editorial staff cannot be too often prompted not merely to write in the sense of their instructions without comment, but to adopt a positive attitude, i.e. in their articles Editors must give full support to measures taken in Norwegian domestic politics and express themselves in a positive sense.

In conclusion, the document adds: