Home > History of Israel > The Man Who Would Be King: Delusions of (Royal) Grandeur in Mandatory Palestine
Land of Israel

Samuel Solnik, who claimed descent from King David, sought to convince the US and Britain to restore the ancient Kingdom of Israel and place his son on the throne 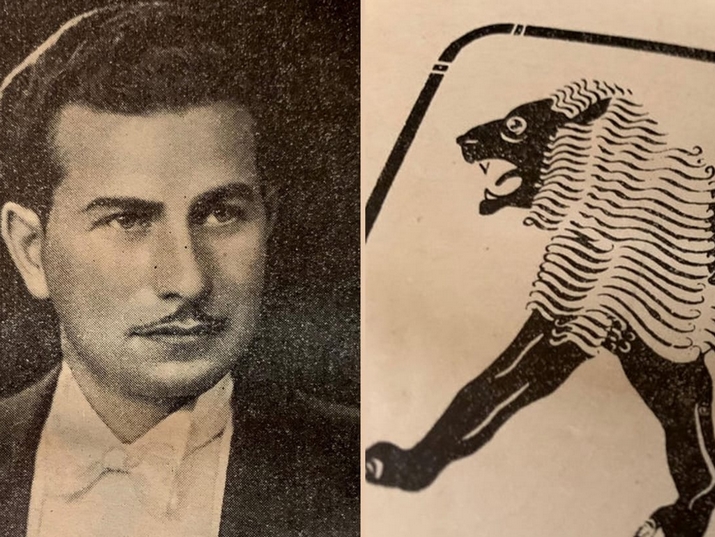 Samuel Solnik created a coat of arms for himself, featuring the Lion of Judah

Samuel Solnik was an ambitious fellow. But then, you can’t really go about reestablishing an ancient biblical dynasty without a little good old-fashioned chutzpah.

This dapper young man looked rather out of place in the simple, unassuming scenery of Mandatory Palestine with its modest buildings, narrow dusty streets and dirty bazaars.

Solnik though, was a fake-it-till-you-make-it kind of guy. He carried himself with an air of European aristocracy – fancy suits, combed back hair and an expensive automobile, at a time when cars were a rare commodity in Jerusalem.

Born in Kalisz, Poland in 1910, Samuel’s father was Herman Solnik, an author and a local Zionist activist, his mother Gitel was a school teacher. With the outbreak of World War II, Samuel made his way to Paris to study dentistry at the Sorbonne. Soon enough though, the Nazis rolled into the French capital and the young Jewish medical student was off to Switzerland to continue his studies.

He finally arrived in the Land of Israel in the early 1940s, settled in Jerusalem and began working as a dentist. It was during this period that Solnik came across documents which he believed proved a long standing family rumor – that the Solniks were in fact descended from the family of Don Isaac Abarbanel, the great Jewish statesman, philosopher and biblical commentator who had served as treasurer to King Afonso V of Portugal during the 15th century.

The Abarbanels in turn had claimed to be of the line of King David himself, and here, Samuel Solnik saw his great opportunity.

It was a time when a political divide was already very apparent between the left wing Labor Zionism of David Ben Gurion and the right wing revisionist Zionism of Ze’ev Zabotinsky and his protégé Menachem Begin.

Solnik set about attempting to convince his fellow Hebrews that they had been wasting their time with their endless political bickering and partisan nonsense.

After all, why bother? They had before them the perfect candidate to oversee the rebirth of Jewish sovereignty in the ancient homeland – No less than a living, breathing heir to the throne of King David!

In 1942, he set out his case in a book: The Kingdom of Israel: The Kingdom of the House of David in Light of Our Current Reality (Hebrew, Shraga Weinfeld Printing Press, Jerusalem).

The first section of this rambling tome resembles the biblical genealogies found in the Book of Genesis and the New Testament, systematically laying out a brief history of each of Solnik’s ancestors – beginning with Rabbi Samuel Abarbanel, Don Isaac’s grandfather – and showing how each generation of Abarbanels begat the next. It tells of a certain branch of the family which eventually settled in Saloniki in modern day Greece (the origin of the name Solnik) before their descendants made their way to Eastern Europe, finally producing Samuel’s father Herman.

“To this day there are families who live among us, with papers proving their lineage that reaches back to the time of the kings of Israel. As an example, I must note the Solnik family, descended from the family of the Sephardic Don Abarbanel, and it is known that he was in possession of a certificate confirming he was a descendant of King David […] Despite the expulsions and the riots this lineage remains unbroken, and the Hebrew people proudly carries the royal crown in its blood!”

Solnik’s book even featured his own royal sigil – the roaring Lion of Judah, striding forward menacingly with bared teeth beneath a regal crown topped with the Star of David. Not the most subtle of symbols perhaps, but this man wished to be king, after all.

Solnik’s presumptuous claims made him something of a curiosity in Mandatory Jerusalem. He and his wife Sima hosted lavish parties for the Hebrew elite at their home in the upscale Rehavia neighborhood, with government ministers reportedly among the many guests. The local press found Solnik and his ambitions rather amusing, and he would often be featured briefly in various gossip columns. Yet despite these minor brushes with fame, it seems he was not terribly successful in convincing his fellow Jews that they had any need of a king.

History is full of monarchs who came to power on the back of widespread popular support thanks to their overwhelming charisma, but Solnik was not of that sort. Nor did he command any armies that could win him a crown by way of the sword, though he once claimed to have convinced a few soldiers to get on board following a drunken Purim celebration (see below).

There was another potential path to kingship, however, which at this stage seemed to him the most plausible.

In early 1946, the Anglo-American Committee of Inquiry began its work in the region. This body consisting of British and American officials had come together in Jerusalem to examine and make recommendations on the question of Jewish immigration in the post-war era as well as the future of Mandatory Palestine.

Samuel Solnik realized that this was his chance to convince the great powers of the world that his family deserved to be sat on the ancient throne of Israel. By this point, however, he had changed his tune a bit. Perhaps realizing that his previous pitches may have come off a little self-serving, Solnik now put forward another candidate for the crown – his son, Emmanuel I, who had been born three years earlier.

An early draft of Solnik’s typed letter to the Anglo-American Committee was recently found in the archives of the National Library of Israel, complete with penned-in additions and corrections of various typos and mistakes.

Solnik, who clearly was simply looking to make life easier for everyone involved, pointed out the simple practicality of his idea in the opening paragraphs (while also emphasizing the drawbacks of representative democracy):

“…the whole world and especially the Anglo-American one will more easily be able to establish common ground with the Royal Dynasty in various and economic problems, than with dozens of Jewish factions, groupings and parties.”

Therefore that Church would continue to support and recognize the JEWISH KING EMMANUEL I thus giving fullest satisfaction to the Jewish Nation.”

“… the Committee – in accordance with the promise given us by God and the Prophets will seriously take into their consideration the creation of a Jewish Kingdom of the HOUSE of DAVID headed by a temporary Regency. The Regency which would consist of 3 members, would take over their functions from the actual Palestine Mandate Governement. [sic]

[…] The following should be appointed to become members of the Regency of the KINGDOM of ISRAEL:

DAVID BEN GURION should be made Prime Minister.”

Alas, the Committee remained unimpressed by Samuel’s arguments in favor of a monarchic system – not only did their final recommendations not  include the foundation of a Jewish kingdom, the committee avoided recommending a Jewish state altogether, though things worked out differently in the end.

By 1949 it seems Solnik had given up, and the local press reported that the pretender to the throne sent a telegram to Chaim Weizmann congratulating him on his appointment as President of the young State of Israel, an act which was perceived as a relinquishing of all claims to the crown.

The prospective King remained but a simple dentist, and now withdrew from Jerusalem, moving his clinic to the seaside town of Netanya, and indulging in his other hobby: stamp collecting.

Solnik would soon leave the country for Canada where he would spend nearly two decades and where much of his family still lives. He returned to Israel in 1969 but passed away two years later following a stroke.

The dream of a Jewish kingdom under his family’s rule remained just that.

Amy Simon, a cataloguer in the National Library’s Foreign Languages Department, contributed to this article.