The Cooking Accident that Destroyed a Jewish Greek Community

The inferno that decimated Thessalonica left 70,000 people, including 52,000 Jews, homeless and penniless. 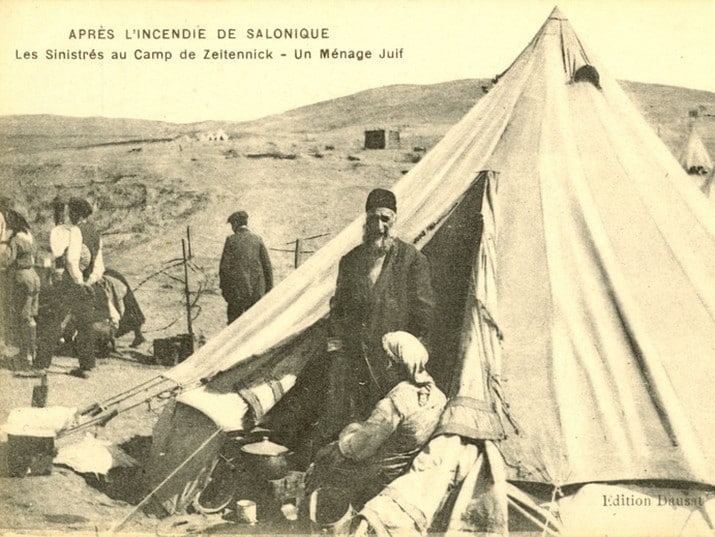 A Jewish family left homeless by the fire that was relocated to a temporary tent camp. Photograph from the Folklore Research Center, Hebrew University of Jerusalem

The fire started on a Saturday afternoon.

What began with a small spark quickly became a massive inferno that, in just a few hours, managed to destroy a large section of the city. While Thessalonica had suffered fires in the past, local officials did nothing to prepare the residents for the colossal damage this fire would cause.

According to official reports, the cause was completely accidental. A woman was roasting eggplants in her home at 3 Olympiados Street on August 18, 1917, when a spark from the flame caught on the walls of the house and quickly grew to a full-fledged blaze. A small cooking accident quickly evolved into a widespread fire that lasted for 32 hours. Strong winds spread the flames through the cramped and narrow alleyways, igniting the wooden homes that served as kindle for the growing fire that engulfed the Jewish quarter of the second largest metropolis in Greece.

The local firefighters did their best to quell the flames but found themselves hindered by a shortage of water. The city had suffered a severe drought the previous summer and the consumption of water had gone up considerably due to the allied forces taking up residence around Thessalonica and its harbor. With no water to come to its defense, the city burned as the fire continued to spread freely from the poor neighborhoods on its fringes, down to the city center, turning building after building to piles of ash.

On the evening of August 19, 1917, the flames were finally brought under control but the damage had been done. Forty-five percent of the population of Thessalonica (also known by the name Salonika), approximately 70,000 people, were left homeless with nothing left to show for the lives they had built other than the smoking embers of the 9,500 homes that had found themselves in the destructive path of the insatiable blaze.

For the Jews of Thessalonica, the majority population in the city, the devastating rampage of the fire proved catastrophic. Before the fire, the city was considered to be the “Jerusalem of the Balkans,” with a rich, thriving and educated melting pot of Jews from different countries and cultures who came together to build a new life. Along with the local post offices, banks and newspaper offices, the local Jewish schools, community centers, the Jewish college, and thirty-two synagogues were completely destroyed along with the entirety of the archives of the community which held records of a centuries-long history of Jewish presence in Thessalonica.

The 70,000 newly homeless people were forced to find quick solutions to their predicaments. With the help of the Greek, British and French authorities, a portion of the homeless were given temporary housing. Parts of the Jewish community were rehomed in temporary tent encampments which provided little more than a roof over their heads and basic protection from the elements. With over 20,000 still without even temporary shelter, many Jews were forced to emigrate and left their home for Athens, the United States, France and the Land of Israel in the hopes of starting over.

With the destruction of the community archives and registry, the Jewish community had to start from scratch. The Jews who remained in the city following the wave of emigration had to build a new community register in order to properly obtain their civil status and file their claims to receive compensation and their land following the fire.

One by one the community members came forward to register themselves and their families and one by one their registration forms were filled out in handwritten Hebrew and Ladino. Each registration was accompanied by small photos of each family member to match the new records that made up the recreated community registry.

After previous fires in the city the government had allowed for people to simply rebuild, but after the great fire of 1917, the government decided to use this as an opportunity to take the newly conquered territory and build a fully modernized, Hellenized city from the ashes. As part of the planning process, the government revoked the old rights and deeds to the land and the old owners were given an opportunity to bid on their plots of land at auction.  Using this methodology, the government seriously hindered the ability of the Jewish community to reestablish itself.

Despite the government’s best efforts and the rising air of anti-Semitism across the country, the Jews fought against the odds and worked to rebuild what had been lost. The community succeeded in rebuilding several synagogues, hospitals, and community centers, though many of the institutions were moved to the outskirts of the city due to the new building plans. The community also rebuilt a successful Jewish press which had three different newspapers in circulation written in Judeo-Spanish, and in French with a daily distribution rate of 25,000 copies.

On the eve of World War II, the Jewish community, once a majority, made up just 40% of the city. When the Germans occupied Thessalonica in the early 1940s they systematically destroyed the Jewish cemetery and more than 50,000 Jews were deported to Auschwitz and Treblinka where over 90% of the once thriving community perished at the hands of the Nazis. Following the war, a handful of survivors returned to their homes and tried to once again reestablish the Jewish community.

A large portion of the remaining archives of the Jewish community of Thessalonica is now preserved in the Central Archives for the History of the Jewish people in Jerusalem, a priceless remnant of a nearly lost culture.