Menasseh Ben Israel, known as the “Ambassador of the Jews,” managed to convince the English that the readmission of the Jews to England would bring about Redemption. 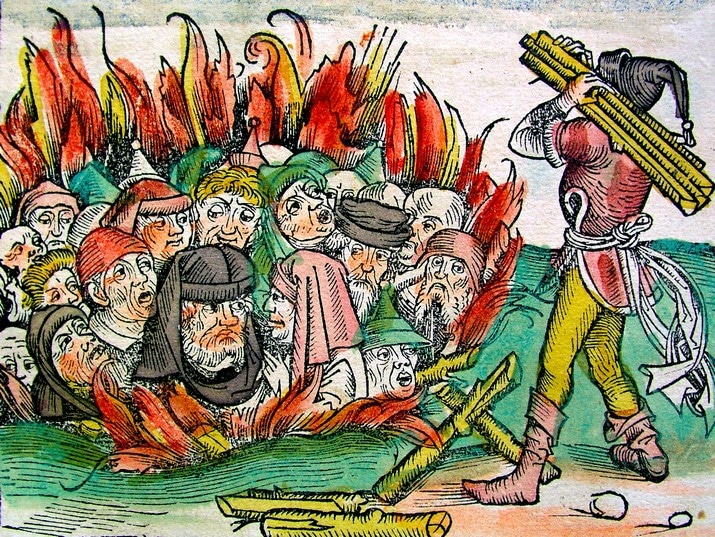 Jews being burned alive for alleged religious crimes. German woodcut from the end of the 15th century.

In the year 1290, the Jews of England were expelled from the realm by royal decree of King Edward I. Even after there were officially no Jews remaining on English soil, Christian theologians continued to regard Judaism as a moral peril that threatened the peace of the pious English folk.  The Jewish community had betrayed Jesus and was culpable for his death. The generations of Jews born after the death of the Messiah were equally guilty of his murder and still had his blood on their hands. Jewish-Christian relations became even more contentious with the expulsion of the Jews from Spain in 1492 and the forced baptism of the Jews who had chosen to remain on the Iberian Peninsula.

During the 16th-century, many New Christians and Jewish converts to Christianity began settling in the British Isles. They developed trade networks to ship all kinds of goods throughout Europe and to the New World. By this time, the attitude towards the Jews had changed somewhat. Many received the New Christians as brothers in all respects, but there were still some who viewed the Christian converts as two-faced shape-shifters, charlatans, and the devil’s henchmen.  This dubious role had, until then, been filled by none other than the Pope in Rome who was viewed by the English as the servant of the devil ever since England broke away from the Catholic Church during the reign of King Henry VIII.

So long as England was ruled by devout Protestant kings, the chances of openly practicing Jews being readmitted to the kingdom was near zero. The relatively small presence of converted Jews was tolerated so long as they did not stand out, to which the bitter demise of Rodrigo Lopez, the real merchant of Venice, stood as proof.

With the execution of King Charles I and the abolishment of the throne in 1649, a rare window of opportunity opened – a historic moment that might have quickly passed had there not been a leader with an iron fist on hand to steer its course. Oliver Cromwell, Lord Protector of the Young Republic, was determined to be this leader. He was joined on the historical stage by another figure, a Jewish thinker who was known throughout Europe as the “Ambassador of the Jews,” and who helped to promote resolution of the “Jewish Question.”

The Ambassador of the Jews Offers the Jewish People Salvation:

The positive attitude toward the Jews held by the victorious Puritans (who sent the king to his death on 30 January 1649) was an open secret. Their messianic belief had them convinced that the second coming of Jesus would occur only when the conversion of all the Jews in the world was completed. They were less certain of to how to go about making this ideal a reality.

Many found their answers in the short book written in 1650 by Menasseh Ben Israel, a Portuguese Jew whose family had fled to Amsterdam when he was a child. Ben Israel gained prominence in the Netherlands as a rabbi, author and printer. As a consequence of his discussions with the Portuguese journeyman converso Antonio de Montezino, Menasseh Ben Israel became convinced that the native peoples of South America were descended from the ten lost tribes of Israel. He provided dozens of testimonies and references from sources and travelogues in order to convince his readers. Menasseh dedicated his book to the English parliament – but why set his sights on England?

Since the Jews had already been expelled in 1290, Menasseh Ben Israel called for their readmission to the island nation – a return that would confirm the ancient prophecy that tied Jewish settlement in all corners of the world to the coming of the Messiah. The strange ideas spread by the Ambassador of the Jews rang true for the English. Ben Israel had provided a winning plan for those who believed that the conversion of the lost tribes in South America heralded the conversion of Jews all over the world, a necessary precursor for the second coming of Christ.

When the time came for serious discussion of the question of readmission of the Jews to England, Oliver Cromwell sent Ben Israel an official invitation to visit the new republic.

The discussions commenced in December 1655 in Whitehall Palace. The matter of the readmission of the Jews to England provoked a huge outcry among theologians, merchants, and the rank and file citizenry who opposed the prospect that the hated Jews would return once again to British shores.

Menasseh Ben Israel’s pamphlet “Vindicie Judaeorum (The Hope of Israel),” was devoted entirely to one purpose: the systematic refutation of the various accusations made against the Jewish people. This time, Ben Israel abandoned his messianic plea for a more legal-philosophical essay.

With the festive conclusion of the meeting at Whitehall, it was decreed that there would no longer be an official law prohibiting settlement of Jews in England. While the government did not necessarily welcome the return of the Jews as many had hoped at the start of the discussions, the door was opened at last for their gradual return. This policy was maintained and later intensified with the reinstatement of the monarchy in England in 1660.