The Magnificent Polish Synagogue That Was Destroyed in World War I

In 1768, a unique wooden synagogue was constructed in the town of Sniadowo. These images are the last ones that were taken before the building burned to the ground. 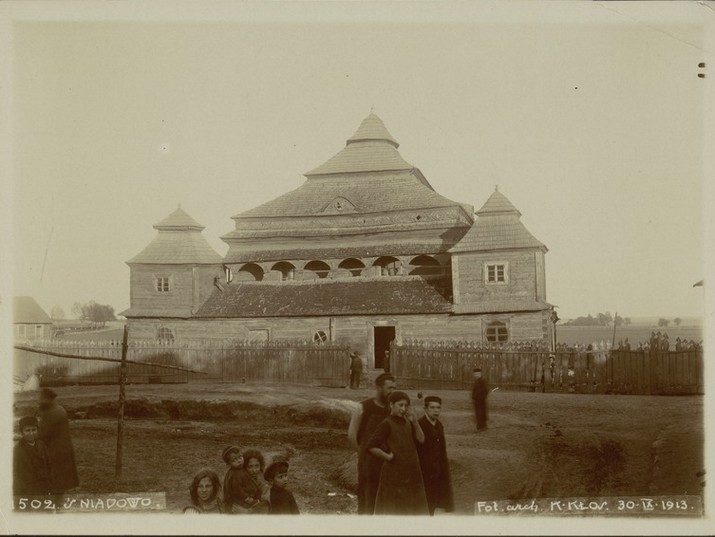 Facade of the synagogue in Sniadowo

On Erev Rosh Hashanah, 5674 (September 30, 1913), Konrad Kłos, architect and historian of Polish architecture, arrived in Sniadowo to photograph the town’s historic, wooden synagogue. He captured the synagogue from many angles. He photographed the bima (main platform), the dome, the balcony, the two women’s sections, and the painted walls. He also captured the men and women of the Jewish community and a few cows grazing in the nearby meadow.

Situated on the banks of the Narbek River in Poland, the synagogue in Sniadowo was built in 1768 and its fame was spread far beyond its wooden walls. Klos photographed the synagogue as part of a project to document important architectural buildings throughout Poland, an initiative he created with fellow architect and friend, Oskar Sosnowski.

The synagogue in Sniadowo boasted a large organized Jewish community. It was part of a group of unusual synagogues built in northern Poland in the 17th and early 18th centuries. The walls were painted and decorated on the inside. This was unusual because of the Jewish prohibition of displaying pictures and sculptures as a part of the laws banning the practice of idolatry.

During this time period, in certain Jewish communities – Germany, for example – decoration of the interior of synagogues was forbidden in order to avoid distraction from prayer. In Poland, however, there was a more forgiving attitude towards decorative flourishes. The sages and rabbis of Poland were asked about the issue and had a mixture of responses. Rabbi Avraham Avali ben Haim Gombiner, known as ‘Magen Avraham,’ suggested that painting on the walls of the synagogue should be permitted, but not at eye level of the congregants and in this way no one would actually be praying in front of the paintings. Others, like Rabbi Akiva Eiger of Pozna, were supportive only of paintings that depicted flora and other plant-life.

The Jews in Poland did not have their own tradition of building and therefore adopted models and techniques that were common in the area. Together with the contractors, they constructed buildings and then expanded them as necessary. The original synagogue in Sniadowo was built as a square (the inner space and prayer hall), and other sections were added on later. The synagogue featured a “broken” roof, causing it to look as if it were made of several levels. Along the outside edges were towers, and the building itself housed historical “galleries,” as well as carved balconies and handrails. The facades, dome, and balconies were all ornately decorated.

In the center of the Sniadowo synagogue stood the bima, upon which the structure of the dome was erected as a kind of Hupa. Unfortunately, the names of the architects, builders, and artists who built and decorated the synagogue are unknown to us today, but one can still be impressed by the beauty of the synagogue through the spectacular photographs taken by Klos in 1913.

At the end of the nineteenth century, there were approximately 1,300 Jews in Sniadowo. During the First World War, the synagogue was burned to the ground and the Supreme Commander of the Russian Army ordered the expulsion of the Jewish inhabitants from the town. Jews emigrated to other cities and other countries. By 1921, only 386 Jews remained in Sniadowo. The population managed to recover somewhat and grew to 869 men, women and children leading up to the events of World War II.

The end of dwindling Jewish life in the town arrived with the German occupation in June 1941. Some of Sniadowo’s Jews were seized and executed on the spot. The rest were sent to the Lomza ghetto on the way to their final destination. They arrived in the Auschwitz extermination camp in January 1943.

Almost all of the wooden synagogues in Poland were destroyed during the Holocaust. These photographs stand as rare documentation and a memory of the wooden synagogue which, just several months after these images were captured, was completely destroyed in the chaos of First World War. They are a glimpse into the Jewish center of Sniadowo at the height of its glory and a testament to hundreds of years of Jewish life in Poland.

The photographs were found in the archives of Rabbi and researcher Shmuel Poznanski.

Thank you very much to Dr. Gil Weisblei for your help in writing this article.