The Jewish Books That Were Plundered by the Nazis 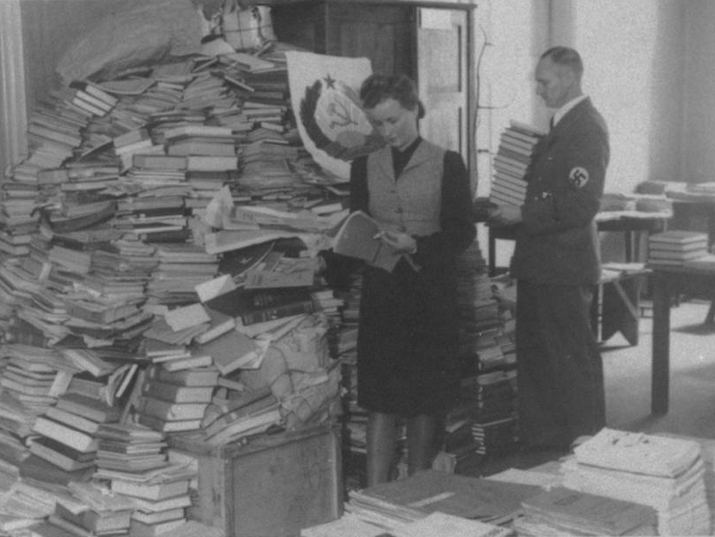 During World War II, the Nazi forces confiscated millions of books from institutions and archives across Europe from “enemies of the regime” which included Bolsheviks, Freemasons, Jews, and others. According to one estimate, approximately five million books were taken from Jewish libraries and Jewish collections over the course of the war. The stolen publications included books on Jewish studies, poetry, and Hebrew literature along with sacred books, manuscripts, and books on science and culture that were written in several languages including Hebrew, Yiddish, Polish, and German.

The Reich Institute for the History of New Germany (Reichinstituts für Geschichte des Neuen Deutschlands), was founded in 1935 and was one of the most significant destinations for stolen books – Jewish books in particular.  The director of the institute was the Nazi historian Walter Frank. Some of his writings published by the institute can be found in the National Library.

The two main bodies that collected Jewish books were the Reich Main Security Office (Reichssicherheitshauptamt) and the Advanced School of the Nazi Party (Hohe Schule der NSDAP). The Reich Main Security Office was founded by Heinrich Himmler and was considered to be the strongest branch of the Third Reich as it included the Gestapo forces, the police, the Einsatzgruppen, and other departments. The ministry was responsible for identifying security threats to the country from its enemies within a jurisdiction that included all occupied countries. One of the departments of the institution, headed by Dr. Franz Alfred Six, worked to collect entire libraries from various parts of Europe for the purpose of investigating the ideological enemies of the Nazi regime.

In 1933, the same year that the Nazi party rose to power, the book confiscations began. The first stage focused on the Freemasons and later grew to include Jewish libraries. With the annexation of Austria, the Jewish collection of the Reich Main Security Office grew to eighty-five thousand volumes. Twenty-four thousand of these books eventually found their way to the Jewish National and University Library in Jerusalem, what later became the National Library of Israel. As more Eastern European countries were occupied, more public and private libraries were raided and their contents were sent to the central library in Berlin.

Nearly two million books accumulated in the central depository of the ministry, but the Reich Main Security Office focused most of its attention on archival material including personal documents, community books, and other information – documents that could help them investigate, identify and annihilate their enemies including the Jews.

With the start of the American bombing of Berlin in 1943, much of the collection was transferred to Silesia and Bavaria for safekeeping. Some sixty thousand Jewish books were sent to the Theresienstadt ghetto where they were cataloged and kept separately from the ghetto library. After the war, the Theresienstadt books were turned over to the Jewish Museum in Prague. The books that remained in the Reich Main Security Office in Berlin were discovered by the Soviet and American forces, respectively (there were two separate buildings for the library in Berlin).

In the end, most of the collection (including many Jewish books and archival documents) fell into the hands of the Soviet Army. It was only with the collapse of the Soviet Union that these books were allowed to be examined by the Russian authorities. A relatively small amount of the materials were returned to previous owners and the fate of the majority of the material confiscated by the Russians is unknown.

The other entity that competed with the Reich Institute for the History of New Germany and the Reich Main Security Office in obtaining the books was the book confiscation unit established by Alfred Rosenberg called the ERR. Though, in terms of the quantity of material stolen, this organization had no real ability to compete with the Nazi security services.

In 1939, Alfred Rosenberg, the chief ideologue of the Nazi party, began laying the foundations for the establishment of the Advanced School of the Nazi Party (Hohe Schule der NSDAP). This institution was set to become the center of Nazi academic studies. Hitler planned to open the school after Germany’s victory in the war and ordered Rosenberg to carry out the preparatory work with a focus on research and the establishment of a library.

The Advanced School of the Nazi Party was meant to include eleven research institutes throughout Germany, specializing in the fields of religion, race, folklore, German studies and more. In reality, the only research institute that was ever established was the Institut zur Erforschung der Judenfrage (IEJ). This institute was opened in Frankfurt and, as every academic institution does, it needed a respectable library. When establishing a library of this sort, books are typically purchased by the institution or received as donations – but the Nazis had a different method.

Rosenberg established a special unit that he named after himself. The Einsatzstab Reichsleiter Rosenberg (ERR) was tasked with touring the major libraries of occupied countries and organizing shipments of the important books back to Germany. The ERR focused mainly on France and the Netherlands at the start of the war, robbing many famous libraries and several Jewish collections including the Rosentiliana Collection, the Etz Chaim collection in Amsterdam, the Library of the Rabbinical Seminary and the Alliance organization in Paris.

When Germany invaded Russia and Rosenberg became responsible for the collection of publications in the occupied territories in the east, many additional Jewish libraries fell into his grasp. The ERR confiscated every collection that appeared significant to its operatives and the rest were sent off to be destroyed. Books destined for the Institute for the Study of the Jewish Problem were sent to Frankfurt and books intended for the other institutes of the Nazi Party’s Advanced School (for a later time when the institute would be opened) as well as books with an unclear destination, were sent to the Central Library in Berlin. Books that arrived in Berlin and were deemed unnecessary for academic purposes were distributed to libraries of universities and other institutions in Germany. Some remain there to this today.

The books at the Institute in Frankfurt were found by the US military after the war. The military and, later, the Jewish Cultural Reconstruction Organization, actively returned books to their former owners and worked to find new homes for the “orphaned” books, like the National Library.

The Institute for the Study of the Jewish Problem regularly published an academic journal called “Weltkampf.” Some of the researchers who published articles in the journal were assisted by the large library that had been accumulated there. In the summer issue of 1941, the list of authors includes Alfred Rosenberg himself who, in the same issue, published an article on the connection between Nazism and science. The issue also includes two articles published by the Institute’s director, Wilhelm Grau. Grau was director of the Department for the Study of the Jewish Problem at the Reich Institute for the History of New Germany until the director of the institute, Walter Frank, was dismissed and Grau took his place.

A list of new books published on the subject appears at the end of each issue of this journal. It is quite astonishing to go over the list and see how many publications (books and articles) about Jews were written in the midst of the war and the Holocaust. In 1944, as the Germans suffered painful defeats in the east and as the Allies bombed German cities and prepared to invade the West, anti-Semitic academics continued to sit in the ivory tower, researching and publishing on the “Jewish problem.” It is even more astonishing to see that some of the books that came to the Institute in these years originated in the United States and England. How did they arrive in Germany from enemy states? Perhaps through a neutral state?

The Weltkampf periodicals came to the National Library after the Holocaust via Austria where many of the collections of the Advanced School of the Nazi Party were sent. They were kept at the monastery of Tenzenberg and found there after the war by British forces. Later, many other books were found and donated to the survivors of the Jewish community in Vienna. In turn, the community decided to donate these books to the National Library in Jerusalem. A few thousand books were sent to Israel in the late 1940s and about eighty thousand more books arrived in 1955. All of these books have been labeled to indicate their origins. 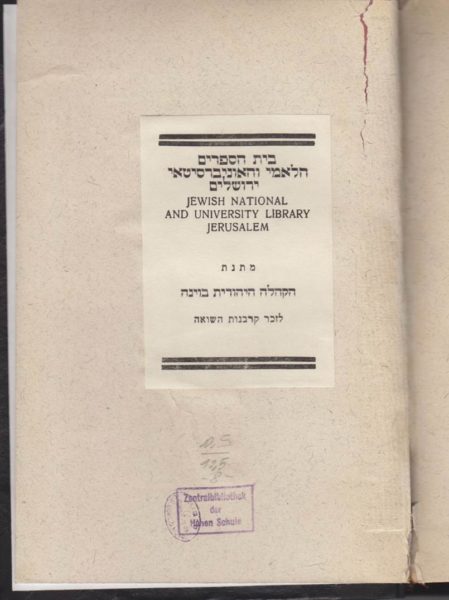 Some of the books that came from Austria to Jerusalem feature the stamp of the Advanced School of the Nazi Party – the institution that sponsored the “study of Jews without Jews” (Judenforschung ohne Juden) – alongside the stamp of the National Library of Israel. 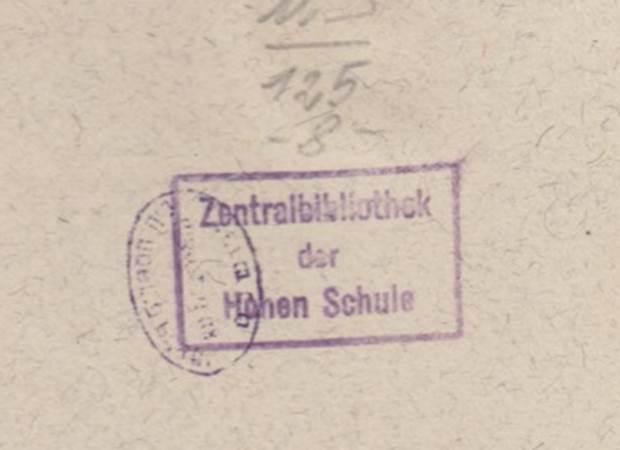