Home > Europe > Love on the Wings of a Paper Airplane
Diaspora

A timeless love story cut short by the horrors of the Holocaust. 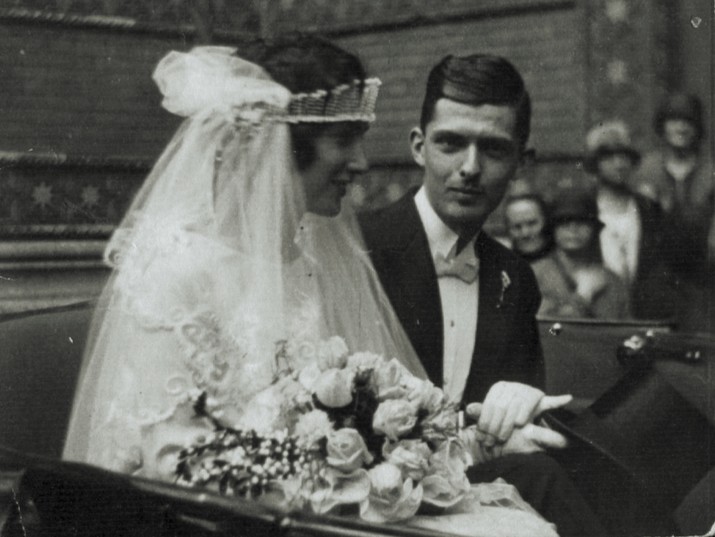 A photo from the wedding of Imre and Ilona Kinszki in 1925.

The following story was collected by Centropa in an interview with Judit Kinszki, the daughter of Ilona and Imre Kinszki. Judit’s full oral history interview can be read here.

Ilona Gardonyi was born in 1899 in Budapest, Hungary.  She came from a large Jewish and religiously observant family that was determined to secure good careers for their children. Though the family came from a modest economic background, two of Ilona’s brothers went on to become doctors.

Ilona graduated from middle school, then a one-year commercial trade school, before getting a job working as a shorthand typist in an office. She worked very hard, taking on overtime and extra projects. Working in the same office was a very skinny, shy young man named Imre Kinszki.

Imre was a highly educated young man who spoke five different languages.  Ilona caught Imre’s eye and he began teasing her, throwing little paper airplanes onto her desk. Ilona, who was a very serious worker, found this to be frustrating and told him off, calling Imre “a stupid little kid.”

For Imre, not only did this not deter him, it only encouraged him to continue. Being too shy to ask her face to face, he wrote a note, folded it into another paper airplane and flew it over to her desk. The note read, “Would you like to meet after work?”

The coworkers met outside of office hours in the Farkasret Cemetery. Imre, still working to overcome his shy nature, sat down on a bench and put his hat down next to him, so that Ilona couldn’t sit too close. The couple spent hours together, chatting about science. When he got home that night, Imre announced proudly to his family that he was going to marry Ilona Gardonyi.

Not everyone was pleased. The Kinszkis were upper-middle-class, highly educated, and did not observe many Jewish traditions – if at all. When Imre Kinszki announced that he wanted to marry Ilona, the family expressed their horror – how could their son marry a girl so far beneath his class?

The Kinszki family gathered together to decide how to handle this new scandal. They determined that their best course of action was to use their connections and have Ilona fired from her job.

Ilona did not let this bring her down. As a talented typist, she was able to quickly find a new position. When Imre found out what his family had done, he went over to Ilona’s new place of employment and proposed marriage on the spot. After a bit of encouragement from her family, Ilona and Imre were married in 1925.

They had nearly 20 years together. In that time Imre and Ilona had two children–Gabor was born in 1926, Judit in 1934. Imre showed a true talent for photography and was quickly becoming one of Hungary’s great modern photographers.

But history got in the way. Imre never came back from the war.

Like all Jewish families in Hungary at the time, the family suffered tremendously in the Holocaust. Imre was taken for forced labor, first in Hungary and then in Germany. Gabor, who had just turned 18, was deported to Buchenwald. Ilona and little Judit survived the horrors of the Budapest ghetto. Judit, who was just 10 years old, held on to her father’s photographs, keeping them safe for when he would return.

The Budapest ghetto was liberated on January 17, 1945. Immediately after the violence subsided, Ilona and Judit began visiting the train station every day where they would watch the trains come through, hoping and desperately waiting for the train that would bring Imre and Gabor back to them and dreaming of a reunion that would never come.

There was no news of Gabor for a long time until one day, Ilona found a young man who had known and worked with him. The friend reported that, when the group arrived in Buchenwald, they were was forced off the train and were asked what skills they had. Gabor answered honestly and said he was a student. The young man explained to the women that the Germans immediately tied him up, and, in the cold December morning, hosed him down with water just to watch him freeze to death along with all the unfortunate souls who did not have a practical trade.

A man who had known Imre found Ilona and gave her what little information he could about her husband’s fate.  He said that the train car he and Imre had been traveling in had been unhooked and that the train then left and continued on towards Germany without them. The group then got off the train car and was taken by their Nazi guards on foot towards Sachsenhausen. Imre’s acquaintance explained that the men were taken to spend the night in a barn. He had hidden by burying himself in the hay, unable to continue on due to the severity of his injuries. The Nazis didn’t find him and he managed to survive. The rest of the group, including Imre, marched on to what is now known to have been a death march – but the acquaintance was not aware of this and Ilona held on to her faith that her husband would return.

Even with the later revelation of the facts of what happened on those marches, and despite everything showing otherwise, Ilona refused to declare Imre’s death and waited anxiously for his return, until the day she died in 1983.

Imre Kinszki’s pictures are now considered modernist masterpieces. His daughter, Judit, is an active member of the Cafe Centropa programs and she regularly meets student groups to talk to them about her experiences.