The story of the newspaper that was not afraid to take on anyone: "Let us destroy to rebuild - we are all suffocating in the dark atmosphere of a community dominated by greedy money-grubbers." 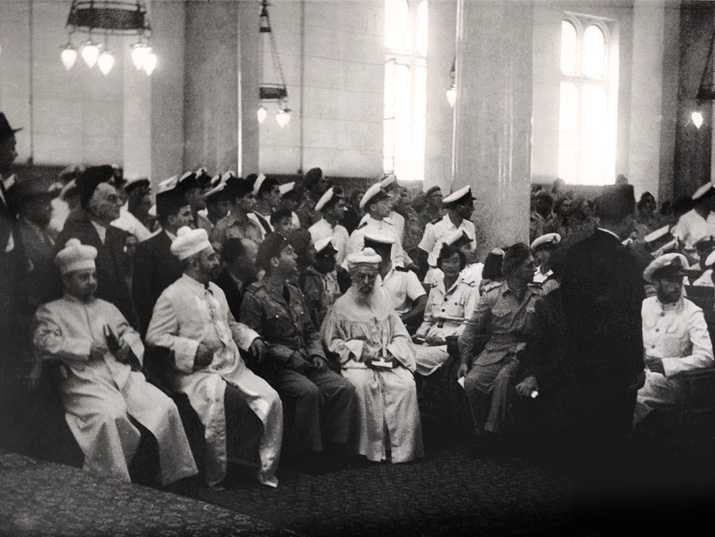 Celebrations of the fall of the Nazi regime in a synagogue in Alexandria, Egypt. Photo: Rudi Goldstein, the Bitmuna Collection

British control of Egypt, which began in 1882, is considered the golden age of Egypt for many reasons. Technological advances and modern modes of thought began to penetrate into the country. Another trend introduced in the wake of British control was an influx of immigrants, specifically Jews, to the country.

The end of the First World War brought about a golden age of Egyptian journalism as well, and saw the proliferation of the Jewish Egyptian press. Jews produced more periodicals than any other minority in Egypt. There were ninety periodicals overall, two-thirds of which targeted Jewish audiences. Most of these were written in French but others appeared in Judeo-Arabic, Yiddish and Ladino. A third of the Jewish-owned periodicals were marketed to the general Egyptian public.

Browse issues of the newspaper on the Historical Jewish Press website

One of the most important Jewish newspapers in Egypt was L’Aurore (The Dawn). Its owner and first editor was Lucien Sciuto (Thessaloniki, 1886 – Alexandria, 1947), a writer and educator, who originally founded the paper in Constantinople, Turkey. Conflicts with leaders of the local Jewish community led to its closure, and, in 1919, Sciuto immigrated to Egypt. L’Aurore was published in Cairo from 1924 to 1941.

The weekly newspaper, characterized by its Zionist and Jewish affiliation, covered many areas of interest – Religious affairs, local Jewish community leaders, relations with world Jewry including the Jewish community of Mandatory Palestine and relations with the Egyptian regime. In addition, the paper published translated articles from newspapers in Mandatory Palestine and starting in 1938, it even included a page written in Italian.

L’Aurore was considered a critical and provocative newspaper. It was not afraid of criticize the heads of the local Rabbinate and Jewish community in Egypt. It was also the first Jewish Egyptian newspaper to send reporters into the field, rely on sources and carry out investigative journalism to expose the reader to deficiencies in the local Jewish leadership.

Several months after publication began in Egypt, the newspaper printed a bold claim:

“Community leadership should be managed by people who can give more of their time than their money. What is the point of a president who does not fulfill his duties and is absent for long periods of time? Before we decide on the identity of the president, we must ensure that the community council is composed of people who are active, respected and involved in the community, who will immediately dedicate themselves to the necessary reforms in the administrative apparatus, which is not functioning. “

Sciuto began to vigorously advocate for the revival and national renewal of the Jewish public and the protection of its rights. Later that year he wrote the following in one of his headlines:

“Let us destroy to rebuild – we are all suffocating in the dark atmosphere of a community dominated by greedy money-grubbers. Join us and we shall take control of this fortress and, stone by stone, destroy it to build a Jewish house with its windows wide open to progress.”

Sciuto frequently attacked the leaders of the Jewish community and drew fire from the community establishment, which boycotted the newspaper and attempted to characterize Sciuto as a “trouble-maker.”

In 1931, Sciuto decided to resign from his management position and pass it on to a more moderate and financially stable executive. He appointed Jacques Maleh, a well-educated, Cairo-born banker as editor. Maleh breathed new life into the periodical by improving its financial management and rehabilitating its public image. He managed to establish a proper relationship with the leaders of the Jewish community and enlisted the help of senior members of the B’nai B’rith organization.

With Hitler’s ascension to power in January 1933 and the beginning of Jewish persecution in Germany, Egyptian Jews mounted a public campaign against German anti-Semitism. They established an umbrella organization, “The League for the Struggle against Anti-Semitism”, led by another Turkish transplant to Egypt, Leon Castro (Izmir, 1883 – Cairo, 1948). Castro, a lawyer, journalist and public figure who was one of the heads of the Zionist Federation in Cairo, acquired part ownership of L’Aurore. He also took part in its editing and turned the newspaper into a mouthpiece for “The League”.

In an open letter to the Acting Prime Minister of Egypt, the newspaper declared:

“Hitlerism in Egypt: This revelation should serve as a warning that if the Jews of the world do not mobilize all their resources to suppress anti-Semitism while it is in this early, hostile stage, it will spread like an epidemic”

The propaganda effort organized by the Egyptian Jews, combined with their absolute boycott of all German products, sparked a reaction: The Germans threatened to impose a counter-boycott on the import of Egyptian cotton. Nationalist groups in Egypt warned the Jews that if they continued to boycott Germany and its products, Egypt would begin to assist the Arabs of Palestine in their struggle against the Jewish community there.

Despite the obstacles and crises, L’Aurore managed to survive for many years. However, the economic fallout from the Second World War sealed the fate of the weekly periodical and led to its closure in 1941.

In December 2018, issues of the newspaper were uploaded to the Historical Jewish Press website, which is managed and maintained by the National Library and Tel Aviv University, with assistance from the Union des Juifs d’Égypte en Israel Association, des Juifs d’Égypte en Grande-Bretagne, ASPCJE en France