A poem denouncing anti-Semitism, correspondence with Zionist leaders, and a ledger documenting important events at the Nordau household are just a few of the items in the collection. 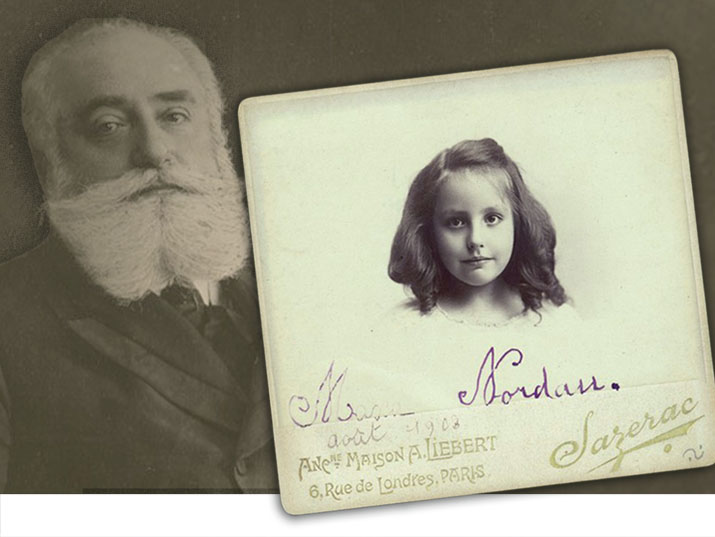 In November 2016, personal documents, letters and photographs from the estate of French painter Maxa Nordau (1897-1993) were auctioned off in a little-known location, north of Paris.

If her name sounds familiar, it is for a good reason. Maxa was the only daughter of Zionist leader, journalist and physician Max Nordau (1849-1923). She was born in Paris, where she lived for much of her life. The small family was forced into temporary exile for several months during World War I, when her father (an Austrian citizen), was expelled from France as a “hostile resident.” After the war, they were able to return to Paris. Later, throughout the duration of World War II, Maxa lived in the United States. Due to these temporary moves to foreign countries, she became fluent in several languages- French, Spanish, German, English and even Hebrew. Her father was also fluent in German, Hungarian, French, English and Hebrew. Maxa’s archive includes documents in all of these languages.

Among the items of the estate sold at auction were letters, notes and manuscripts which had once belonged to Max Nordau. His personal archive had, in fact, been entrusted to the Central Zionist Archives in 1949. Yet it has since come to light that a considerable number of documents remained in the family’s possession. Thanks to the generous support of donor Mr. Ori Eisen, part of Maxa Nordau’s estate was purchased at the auction, including many of her father Max’s letters and manuscripts. These materials were brought to the National Library of Israel for safe-keeping, but they had been kept in complete disarray. Over the span of several months, the large collection was meticulously organized and catalogued. The manuscripts were restored, the pages having been scattered amongst the entirety of the collection. Now, post-restoration, the collection has been organized into five parts:

4) Correspondence of members of the Nordau family, including that of Anna, Max’s wife.

In all, the list compiling the items of this collection includes 312 entries.

There are some particularly interesting items found within the collection. For example, a poem scrawled out in Nordau’s own handwriting:  “To the Anti-Semites” (Den Antisemiten). This poem was published in an 1893 anthology of texts and poems opposing the rising wave of anti-Semitism at the time. Max Nordau’s handwritten manuscript of the poem was mounted on the stationery of the publishing house that published the anthology, and this manuscript is now preserved in the collection. In his poem, Nordau compares a rotten barrel that spoils wine by turning it into vinegar, to a poisoned soul that turns Christian love into hate. In the poem’s second verse, the author appeals to the reader to remember Jesus (forgotten in the heat of Pagan anger towards Jews) and calls for forgiveness towards Christians with the words, “You know not what you do”.

Another interesting item in the collection is a letter from Nahum Sokolow to Max Nordau, written in London in December of 1915. The letter indicates that there were stark differences of opinion between the two Zionist leaders on a number of topics. Sokolow proposed not to discuss their philosophical deviations through letters, but rather in face-to-face conversations when he arrived to visit Nordau (who was then living in Madrid).

Two previously unknown letters from Vladimir Jabotinsky to Max’s daughter, Maxa Nordau, were also unearthed in the collection. Written in 1930, the latter of the two letters offers congratulations on the birth of Maxa’s daughter, Claudy. In the letter he also made sure to add well-wishes for the New Year. The letter is quite linguistically unique, as the author switches freely between two languages- English and French.

Among the Nordau family’s internal correspondence is a large collection of hundreds of letters written by Anna Nordau to her daughters between 1914 and 1918. In these letters Anna, originally an opera singer from a Danish Protestant family, reported to her daughters from her previous marriage who were still living in Paris, about her life with Max in the Spanish capital. In most of the letters, she wrote about everyday goings-on. Here and there she boasted about hosting important guests at the Nordau house. Among them were South-American government ministers, as well as the Jerusalem-born orientalist Avraham Shalom Yehuda, a close friend of Max’s.

One of the most interesting items in the Nordau collection is a ledger, kept by Anna Nordau, listing daily expenses, important Nordau events (such as visits and travel) and letters received and sent daily. Between 1907 and 1925, 12,000 incoming letters and 10,000 outgoing letters were recorded in the 406 pages of the ledger. This vast amount of correspondence entering and leaving the Nordau residence impressively illustrates Max Nordau’s central role in the Jewish-Zionist community and, beyond that, his importance as a famous writer and journalist of his time.

This collection is also accompanied by an item that has apparently resided at the National Library for quite some time: a compilation of manuscripts which record speeches given by Max Nordau at the Zionist Congresses between 1897 and 1911. Nordau was prone to writing his speeches down in his own handwriting. At one point, all of his manuscripts were collected, bound and handed over to the National Library. It was decided that this item’s rightful place was alongside the other materials in the Nordau collection, which now awaits scholars in the Archives Department of the National Library of Israel.

Harry Potter, Abraham the Jew and the Philosopher’s Stone