An anonymous letter, recently discovered in the National Library archives, offers a glimpe into a time of crisis when the residents of Tel Aviv were prisoners in their own homes. 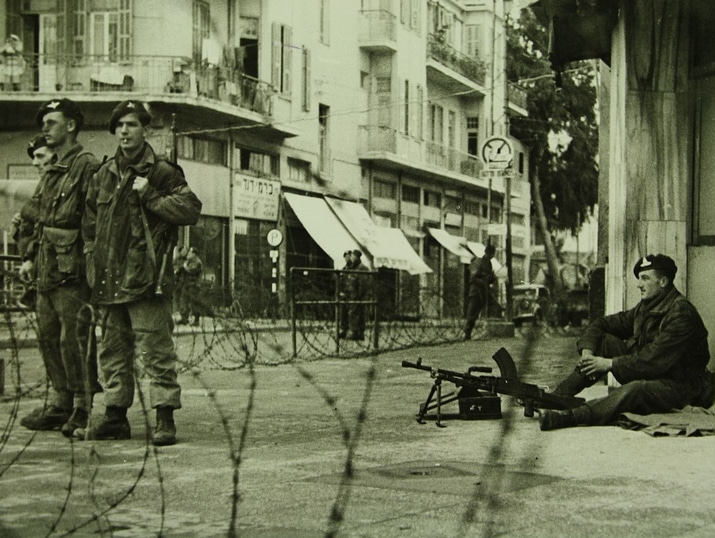 British soldiers enforcing a curfew in Tel Aviv during the 1940s. Taken by Haim Fein, the Emanuel Harussi Photograph Collection at the National Library
It’s 1945. A rebellion is underway.

The streets of Tel Aviv are nearly empty but they are not quiet. The unnatural churn of steel on asphalt shatters the stillness of night, as tanks roll through residential neighborhoods. Every few blocks, British soldiers position themselves on street corners, armed with machine guns. A curfew has been set. Those who venture outdoors are, at best, arrested. The inhabitants of the first Hebrew city find themselves under the distrusting glare of their supposed protectors.

The reason for this state of affairs? – Riots, deadly ones. Two men lay dead, and dozens of others wounded, after the city had erupted in fury. On November 14th, fifty thousand people came to protest the British government’s decision to keep in place the strict limitations on Jewish immigration to Mandatory Palestine. The horrors of the Holocaust, the details of which were now becoming clear, were not enough to change that.

There had been high hopes. World War II was now over and ahead of the July 1945 elections in the UK, British Labour Party politicians promised to remove the restrictions on immigration to Palestine. But those promises seemed to evaporate into thin air once the party came to power. Foreign Secretary Ernest Bevin put an end to any lingering optimism on November 13th: He stated in Parliament that the restrictions would continue, adding that the vast majority of Holocaust survivors should instead contribute to “rebuilding the prosperity of Europe”. To add insult to injury, Bevin even declared that Britain had never committed itself to the establishment of a Jewish State, only to a National Home for the Jewish people. True perhaps, but it was not what the citizens of Tel Aviv wanted to hear.

Bevin’s statement was the breaking point, but British intentions were clear even before. The Jewish underground organizations, Haganah, Irgun and Lehi, formed the United Resistance Movement in October as a response. Its first act was a massive sabotage operation on the night of November 1st: Over a hundred mines and bombs were set off simultaneously, paralyzing the British railway system throughout Mandatory Palestine, in what became known as “The Night of the Trains”.

The decision by the Haganah, affiliated with the moderate Jewish establishment, to join the Irgun and Lehi in open rebellion against the British was a bold one, but even the moderates had now had enough. “Bevin’s treason completes Hitler’s genocide of the Jewish people, which murdered millions of our brothers!” cried the announcer on Haganah radio ahead of the November 14th protest, as he called on Jews around the world to rise up and take action against British policy.

The huge rally was organized quickly, for the day after Bevin’s statement. Tensions were at a climax and public outcry now reached its peak. The speakers raged against the British, condemning the desertion of Europe’s suffering Jews and the appeasement of Arab leaders who were opposed to further immigration. The organizers called to refrain from provocations, but once the rally had ended, bands of young protesters began to channel their anger into violence.

The riots broke out on Levontin Street and spread quickly to surrounding areas including Allenby Street and Rothschild Boulevard. The youths clashed with soldiers, threw stones at military vehicles and set fire to government buildings. The British soldiers eventually responded with gunfire, killing two youths: Aryeh Basdomsky (21) and Yehoshua Friedman (18). Meyer Levin, a Jewish-American correspondent writing for the New York Post, described what he saw as the “battle of His Majesty’s forces versus the children – yes, literally children – of Israel.”* By 22:00 the city-wide curfew had been announced and by midnight the streets were empty. Those working the late shift at the newspaper bureaus spent the night in their offices, unable to go home.

This was the setting for the letter.

Recently discovered in the archives of the National Library is a mysterious pamphlet, written during the period described above. The identity of the writer is unknown; the letter is signed only “A Citizen of Tel-Aviv”.

It is unclear exactly how it arrived at the library and who donated it. Unusually, it is written in English, and addressed to the British 6th Airborne Division, then stationed in Tel Aviv. The text is a powerful one. It appears below, in full:

To the men of the 6th Airborne Division

I am writing you as a plain citizen of Tel-Aviv to tell you what most of us feel in these days of heartbreak and bitterness. You have been in occupation of our city for nearly a week. You have locked us up in our houses at day and nighttime because a mob of street urchins did things which, when they occur in Liverpool or Glasgow, are handled by the Police within a space of hours, if not minutes. Your tanks are rolling through our streets, your aeroplanes have been droning on our roofs, your rockets have been lighting up our skies. It has been a nice little nerve war against the peaceful citizens of a modern city.

Do you think you have frightened us? There is among the 200,000 Jews of Tel-Aviv not a single family which has not lost some relative in Hitler’s death camps and gas chambers. Do you think that people who have gone through these agonies are going to be frightened by the sight of tanks or the glare of rockets?

I am sure a good many of you hate the whole ugly business. You are not hired soldiers. You are the free citizens of a free country who joined up to fight the worst tyranny on earth. You have done your job and you have done it gallantly. You are now being employed on a very different kind of job. You have been sent to this country, so you have been told, “to fight the Jews”, in other words, to break the resistance of a desperate people against a most horrible betrayal.

It is nearly thirty years since a British Government, with the support of all of the Allied Nations, pledged itself to help the Jews to rebuild their national home in Palestine. To what developments that policy has given rise in this country you can see with your own eyes. It has produced nothing less than a new civilization. A new spirit has revived this ancient land, the evidence of which you see in this town of Tel-Aviv, in the Jewish agricultural settlements, in the new Jerusalem and Haifa, in the Hebrew University and in the innumerable colleges and public institutions, in the new standards of life among both Jews and Arabs. For the first time, after centuries of dispersion and degradation, Jews are again walking erect on the ancient soil of their race. They have only one aim and one desire: to bring over to this country the remnant of the persecuted and tortured Jewries of other lands give them a home among themselves.

The British Government have decided that this shall not be. The Jews, Mr. Bevin says, are to remain in Europe and help “rebuild its civilization”. Never mind that they want to flee as fast as they can from the countries which are covered with the graveyards of their nearest and dearest. Never mind that all Europe is full of their enemies and that six months after the fall of the Nazis Jews are still being killed and persecuted in the countries liberated from the Nazi yoke. Never before have the Jews been so bitterly in need of this National Home and never before have its doors been so effectively bolted in their faces.

No commission of inquiry, such as promised by Mr. Bevin, is needed to establish the fact that the Jewish survivors of the Nazi terror want to shake the dust of blood-stained Europe off their feet and find a refuge and home among their own people in this country. No Commission of Inquiry is needed to prove that Palestine can absorb these survivors better and more speedily than any other country on earth and turn them from wrecks into useful members of society. No man who knows anything about the facts has any doubts that Mr. Bevin’s commission represents nothing but an old bankrupt device to gain time for something to turn up.

We have no illusions of what is in store for us. We know that your aeroplanes and tanks can turn Tel-Aviv, within a few hours, again into the sandy desert which it was before we began to build it thirty years ago. We know that you can turn the whole of Jewish Palestine, our towns and settlements our schools and colleges, into dust. Might is on your side, but yours is no longer a good cause. You are fighting for the Arab Pashas who want to see Palestine reduced again to the condition of desolation and stagnation in which our pioneers found it fifty years ago. You are fighting for the oil magnates who, for the sake of their profits are ready to sacrifice to the Pashas and Effendis all that we have built up in this country with our sweat and tears. What do they care for progress and development? They want you to finish the job that Hitler and Himmler began – to crush the Jews. This prosperous young city which gave refuge to many thousands who would otherwise have died in the Nazi gas chambers – is it to be smashed up by your bombs and tanks? Our agricultural settlements about which so much has been spoken and written and where so many of your comrades found rest and recreation in the darkest hours of the war are they to be turned again into swamps and stony deserts as in the good old days of Arab misrule?

You are armed well enough to carry out that ugly job, though you are likely to meet with the desperate resistance of a people which has no longer anything to lose. But neither your tanks nor your aeroplanes will break our determination to rebuild this country which remains our National Home whatever Mr. Attlee and Mr. Bevin may say. You may smash up all we have built and in the wake of your tanks and batteries the Pasha and the Beduin will re-establish their blighted rule. But that won’t be the end, though it will certainly be the end of British rule and glory in this country. Others will come from the four corners of the earth and will rebuild what you have destroyed. No force on earth can prevent our returning to the land where history has cast our destiny. Tel-Aviv, November 1945 A Citizen of Tel-Aviv

Three more people were killed in riots which broke out again on November 15th. The curfews continued for six nights in a row. Violent clashes carried on throughout the rest of the month across Palestine. By the end of November, fourteen members of the Jewish Yishuv had been killed. The United Resistance Movement lasted less than a year before being disbanded in August, 1946.

Do you recognize the text of the letter above? Did you pick up on any clues that may indicate who the author was? If you have any information that can shed some light on this mystery please contact [email protected]

Ariel Viterbo, of the National Library’s ephemera collection, assisted in the preparation of this article.