In the early 1960s, a team of Israeli experts was dispatched on an urgent mission to Iran, to help rebuild an earthquake-ravaged region. 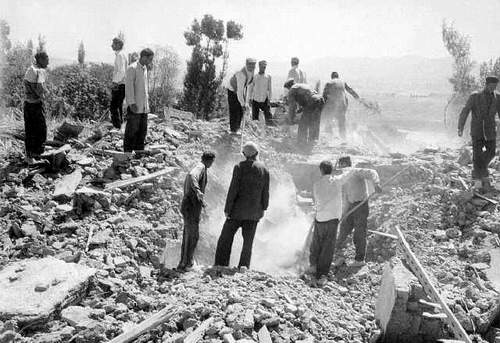 Over 12,000 people were killed when an earthquake hit Iran's Ghazvin region in September, 1962

As head of the vaguely named “Plan Organization of Iran”, Safi Asfia was the man in charge of the nation’s early nuclear ambitions. It was on his door that Akbar Etemad, popularly known as the father of Iran’s nuclear program, knocked when he wanted the Shah’s blessing to jumpstart the program in 1965. At age 23, Asfia had become the youngest professor at Tehran University, instructing in both mathematics and geology. His responsibilities as head of the Plan Organization were quite extensive, as it was tasked with overseeing all of Iran’s development projects. It was in this capacity that Asfia signed off on an agreement with TAHAL (Water Planning) Ltd., an Israeli government corporation known for developing some of the 20th century’s most ambitious water supply and irrigation systems.

Within a few months, Asfia’s Plan Organization approached Tel Aviv-based TAHAL requesting comprehensive collaboration to rebuild and strategically plan the entire region. The work would serve as a model for planning and modernizing efforts throughout the whole of Iran. An official publication produced by the Plan Organization of Iran and TAHAL (Water Planning) Ltd. – Iran Branch details their intimate relationship, which now seems an almost unfathomable not-too-distant reality.

The National Library of Israel in Jerusalem holds a copy of this rare document, a two-volume work produced in English and Persian entitled Ghazvin Area Development Project Reconnaissance Report. The report includes a copy of the official letter sent from Israeli team leader Arie “Lova” Eliav to Safi Asfia, as well as extensive survey data, detailed illustrations and a six year plan for developing the Ghazvin Area.

According to the report, as part of the initial recovery phase, “The Government of Israel sent a team of architects and technicians who, working under the authority of the Iranian Ministry of Agriculture, planned and rebuilt the totally destroyed village of Khuznin.” While this and other improvised projects moved forward, “[T]he Government of Iran decided to make the severely damaged Ghazvin Area the subject of complete re-planning, with the object of raising its level of production and the standard of living of its inhabitants.”

On January 6, 1963, Safi Asfia signed a contract in Tehran with TAHAL’s representative there. Within days, the TAHAL team was on the ground in Iran. Led by Eliav, the team included Ephraim Shilo, noted agriculturalist and religious Zionist activist, as well as other leading academics and practitioners – from among the young Jewish state’s best and brightest.

TAHAL would oversee two other Israeli teams and work in close collaboration with the Iranian government and other international aid workers, including those sent through the auspices of the United Nations. 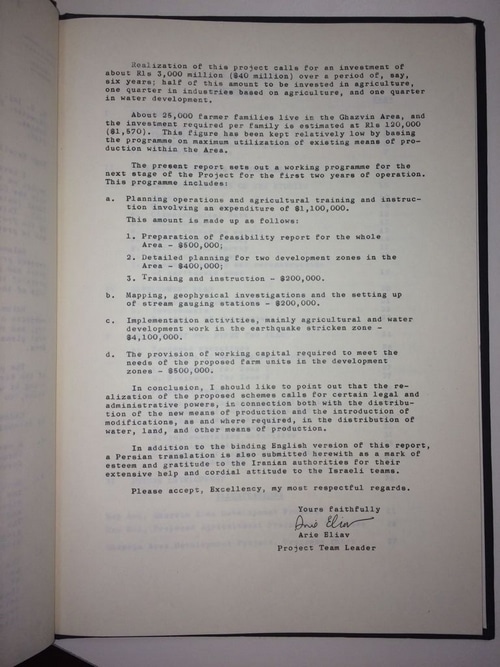 After addressing immediate and urgent needs, the Israeli team was tasked with four primary objectives: 1) carrying out a general survey of the Ghazvin Area in order to best plan its future development; 2) preparing a plan for the entire earthquake zone, including new villages and detailed plans for construction to begin within six months’ time; 3) introducing new crops and setting up demonstration plots to instruct the locals in improved agricultural practices; 4) training Iranian engineers, “one of the most important aspects of the work” according to the Iranian-Israeli contract.

Only in retrospect does a high level Iranian official bringing Israeli experts in to train Iranian engineers seem in any way remarkable. Historically speaking, collaboration was commonplace: Israel, of course, had quite a close (if not controversial) relationship with the Shah’s regime.

Even so, brief details of Israeli-Iranian cooperation and comradery included in an otherwise dry planning report is somewhat remarkable, especially given today’s geo-political climate:

“Since the Israeli team worked and lived in Ghazvin and all its activities were connected there, it was natural for the Iranian personnel in training to join them and live and work with them in Ghazvin… It is gratifying to note the close comradely relations which developed between the Iranians and the Israelis as a result of working and living together, joint trips and discussion of the work, and the attitude of mutual appreciation which grew up between the teams and the trainees and staff through working together on a joint project.”

In the spring of 1963, at the request of the Iranian Independent Irrigation Corporation (Bongah Abiari), which was also involved in the work, the Israeli team even offered a special course in geology for select students from Tehran University. Dozens of Israelis and Iranians lived, worked, learned and even trekked together.

Warm words beyond basic requisite courtesies are also found in the report: “It is wished to stress the fact that while the Israeli engineers endeavored to impart knowledge to their Iranian colleagues, they themselves also learned much from, and were greatly assisted by, the Iranians. There is no doubt today that without their devoted work, both in the field and in the office, the Israeli teams would not have attained the results they did…”

A full list of the Iranian engineers appears in the report (including one Khalil Khamenei), as does a listing of the senior Israeli, Iranian, and international officials involved in the efforts.

Warm Israeli-Iranian relations, including other collaborative planning and development work, continued until the Revolution of 1979.

Safi Asfia was arrested by the new regime and languished in prison for five years where he reportedly passed the time by teaching French to other inmates, studying Italian, molecular biology and computer science, and tinkering with watches and electronics. One story tells of a blind-folded Asfia even offering to help fix a judge’s tape recorder, which had broken mid-interrogation.  He lived in Iran until his death in 2008.

Arie Eliav, who had led a similar Israeli aid mission to Morocco in 1960, headed another one to Nicaragua in 1972. He worked for decades encouraging immigration to Israel, promoting a peace agreement with the Palestinians, and settling the Negev. Eliav served three terms in the Knesset, served as Chairman of the Israeli Labor Party and was a one-time presidential candidate. In 1988, he received the prestigious Israel Prize for his life-long contribution to Israeli society. He passed away in Tel Aviv in 2010, just two years after Safi Asfia.

In the fall of 2017, nearly 55 years to the day after the Ghazvin quake, a major earthquake hit Iran once more, with tremors felt as far away as Tel Aviv and Haifa. The Israeli government offered humanitarian assistance. It was declined.