The True Story Behind Harry Potter, Abraham the Jew and the Philosopher’s Stone

The true story of the mysterious owner of the Philosopher's Stone... 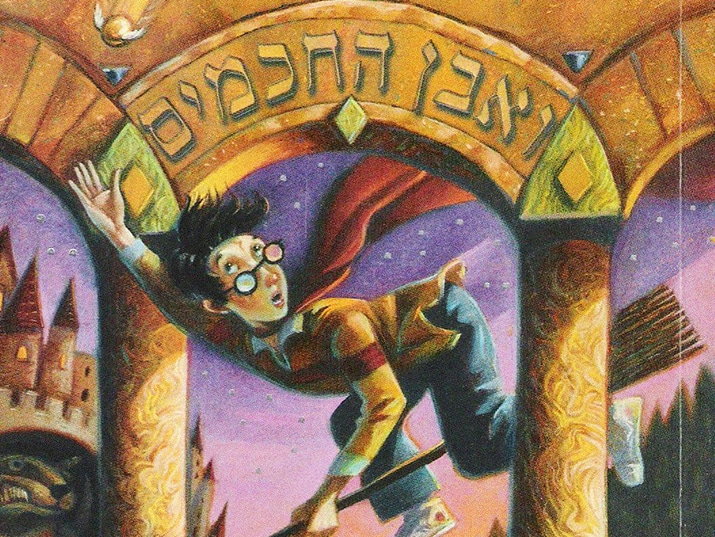 The cover of the Hebrew version of the book "Harry Potter and the Philosopher's Stone", published by Miskal, Books in the Attic

In 1407, an underground passageway was built next to a large mass grave in Paris’ central burial ground, known as “The Holy Innocents’ Cemetery” (Cimetière des Saints-Innocents). The upper section of the new passageway was decorated with a group of statues featuring the typical Christian iconography of the time.

The statues depicted Jesus, surrounded by Saint Peter and Saint Paul, as well as by the couple who donated the underground passageway: Nicolas and Perenelle Flamel. Under these figures are several plates portraying traditional early 15th century Christian symbols.

Very little is known about Nicholas and Perenelle Flamel. Were it not for the group of statues in the Parisian cemetery, Nicolas Flamel would undoubtably have been forgotten by the residents of the city within a few decades of his death. The statues were destroyed towards the end of the 18th century, but Nicolas Flamel’s name outlived that destruction as well.

During the Renaissance period, many people attempted to decipher the deeper meanings of the Middle Age Christian symbolism displayed in the statues, among them several alchemists. One of these, Robert Duval, immediately identified two dragons featured on one of the plates placed below the statues as an alchemist symbol for the creation of metals.

From this point forward, the plate drew a great deal of attention from those familiar with various secret teachings, and the cemetery became a site of pilgrimage for alchemists and other dabblers in the occult and the hidden sciences.

As early as the late 16th century, a legend spread that Flamel owned an old and mystical book from which he studied occult teachings. The esoteric information in the book’s pages helped Flamel to crack the secret of the creation of gold and silver by means of a “philosopher’s stone”. The legend was recorded in a French text known as Le Sommaire Philosophique (“The Philosophical Summary”), which includes a description of pictures similar to the figures displayed in the cemetery statues.

It seems that turning Nicolas Flamel into a mystical sage was not sufficient and an autobiography attributed to Flamel himself was suddenly discovered in the early 17th century. This book was given the mysterious name “Exposition of the Hieroglyphical Figures” (Livre des figures hiéroglyphiques) and relates a classic tale in the field of alchemy: one day, while working as a registrar of estates of the deceased, Flamel encountered a book bound in a gilded copper binding whose 21 pages were made of tree bark.

The book was written in what appear to be Greek letters, which Flamel did not know how to read, and was replete with unusual illustrations. According to the title page it was authored by “Abraham the Jew”, a prince, Levite, astrologist and philosopher. Flamel bought the book and managed to decipher its contents but was unable to understand the hidden symbols in the illustrations. Flamel, therefore, traveled to Spain, where he hoped to find a scholar able to explain the true meaning behind the images.

According to the tale, in Spain, the Parisian scholar found a Christian doctor with Jewish origins named Canche, who managed to decipher the message hidden in Abraham the Jew’s mysterious book. The doctor claimed that the illustrations contained the secrets behind the creation of metals. Canche died on their journey back to Paris, but after his return, Flamel managed to create high-quality strands of silver and gold in alchemical experiments based on Canche’s interpretations of the images. This discovery, the autobiography tells us, improved Nicolas and Perenelle Flamel’s financial standing to such an extent that they could make large donations to welfare institutions in Paris.

The autobiography also notes that the mystical drawings in Abraham the Jew’s book were evemtually reproduced in the aforementioned underground passageway in the Paris cemetery.

It is important to note that the original manuscript of Flamel’s book was never discovered. Abraham the Jew’s book was also never found. Historical research has proven that the book “Exposition of the Hieroglyphical Figures” was written by a 17th century author and alchemist. The autobiography contains language typical of that time, and mentions people not yet born during the lifetime of the historical Nicolas Flamel.

The qualms about the background and history of the supposed autobiography did not prevent it from enjoying a long and fruitful shelf life. After its publication in French in 1612, the text was translated into other languages (English in 1624, and German in 1681). One of the enthusiastic readers of the autobiography was none other than Isaac Newton (1643-1727), the father of modern physics. Newton summarized the book by hand and even copied out the picture depicting the group of statues in the Paris cemetery, including the mysterious plates which have been referred to as hieroglyphics. This manuscript can be found, together with Newton’s other alchemistic writings, in the Sidney M. Edelstein Collection at the National Library of Israel.

Copies of the fantastic autobiography attributed to Flamel can still be found today. The last edition we are aware of was printed in 1996 in Spain under the name El libro de las figuras jeroglificas. The figure of the supposed author, Nicolas Flamel, was also brought back to life in contemporary literature. In J.K. Rowling’s book Harry Potter and the Philosopher’s Stone (published in the U.S. under the name Harry Potter and the Sorcerer’s Stone), Flamel is described as a man who is hundreds of years old, a friend of Albus Dumbledore the headmaster of Hogwarts School of Witchcraft and Wizardry, and the owner of the Philosopher’s Stone.

Flamel also makes an appearance in Dan Brown’s popular book The Da Vinci Code, and the Irish author Michael Scott even dedicated an entire six-book series to the imaginary Flamel: The Secrets of the Immortal Nicolas Flamel. Needless to say, all these literary works are unconnected to the historical Nicolas Flamel.

So who was the historical Nicolas Flamel?

To the best of our knowledge, Nicolas Flamel was born around the year 1330, not far from the French capital. In 1370 he married a widow named Perenelle and spent most of his life as a transcriber of manuscripts, an author and low-ranking legal clerk – positions from which he made a living. He later became a manuscript merchant in the service of the University of Paris.

The funds which helped him and his wife become patrons of a series of small churches, hospitals and other welfare institutions should be attributed to his wife – she appears to have been in possession of significant financial wealth when she was married to Nicolas, which she inherited from her two previous deceased husbands.

All the above information can be found on a 600 year old tombstone currently found in a museum in Paris (Musee de Cluny) which, together with several of the couples’ original documents, tell the story of the man immortalized both among lovers of secret teachings and readers of modern fantasy literature.