According to this Soviet Russian Haggadah, the eternal revolution of Marx and Lenin was responsible for liberating the Jews from the bondage of the bourgeois... 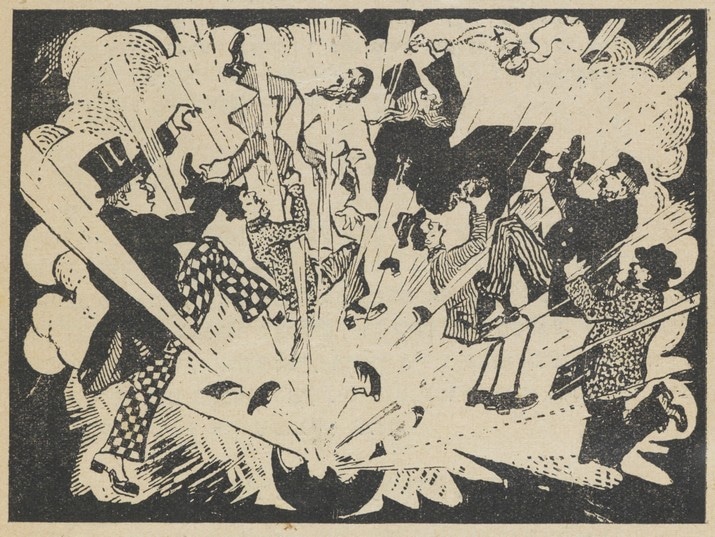 “Next year in Jerusalem!” cry the multiple voices of Jews around the world when they finally reach the end of the Seder, the ritual meal of Passover. It is during this never ending meal that Jews recount the road out of slavery towards liberty. This is when parents tell their children that in every generation, every Jew, must consider themselves as though they had been freed from the bondage of Egypt.

Except in Soviet Russia, where a special Haggadah was written and distributed in which the cry for revolution, not Jerusalem, was brought to the table. “This year a revolution here; next year – a world revolution!”

The communist Jews of the early Soviet Union put together special propaganda Haggadot in which the old Jewish traditions were decried and the new communist ideas were embraced. One of them was the Komsomolishe Haggadah, published in Moscow in 1922 by Moshe Altshuler.

One way in which Altshuler portrayed these new ideas was in using the language of Passover to show how communist ideals have and will continue to spread throughout the world. For example, one of the traditions prior to the celebration of Passover is the removal of leavened bread and products made of wheat in general from the home.

They are then gathered in a pile and set on fire so that they can be destroyed. This is called in Yiddish bdikes-khomets, literally meaning, “checking for chametz “, the remnants of bread and wheat products in the home. Altshuler interprets this bdikes-khomets in this way:

“Five years before the first Komsomol Pesach all Russian proletariat and peasants performed bdikes-khomets in the land. They removed all remnants of the rule of the bourgeoisie and landowners, gained power in their hands and defeated the enemy on all fronts.

In the fire of Great Socialistic Revolution they burned kolchaks, yudeniches, vrangels, denikins, pilsudsskis, petlurs, chernovs, gotzs, dans, martovs, abramoviches and said the brokhe: “All landowners, bourgeois and their minions – Mensheviks, SRs, CaDets, Bundists, Zionists, Poale Zions, Tsaire Zions and all other counter-revolutionists, nuisances, ne’er-do-wells and parasites should be burned in the fire of the Revolution. Those who were already burned, shall never rise again, and as to those who will remain, we will sacrifice them and hand them over to the State Political Directorate.”

What else is there to say?

Altshuler wanted to show the younger generation that the old bourgeois ideas were as bad as khometz during Passover. By using the colloquial language, Yiddish, and the older traditional form of the Haggadah, he made the Soviet revolution accessible to every Jew living in Moscow and beyond.

The Haggadah is chock-full of examples where Altshuler appropriated the religious activities and made them communist for the proliferation of communism. Like the splitting of the matzah (Yechatz – יחץ) in which the revolutionary Proletariat split the control of the means of production from the capitalist bourgeois, the wrapping (Korech – כורך) in which the revolution consumes the bosses and oppressors of the working class, and the sacrifice itself, (Korban Pesach – קרבן פסח), which looks shockingly traditional.

Through all of the above the communist ideals of the Soviet revolution were realized.

This article was written with the help of Dr. Yoel Finkelman, Curator of the Judaica Collection of the National Library of Israel.