The Comic Books on the Ultra-Orthodox Bookshelf

The majority of comic books published in Israel are aimed at Haredi children. Here is a glimpse into the world of "The Fearful Heroes" and "A Yiddishe Kop." 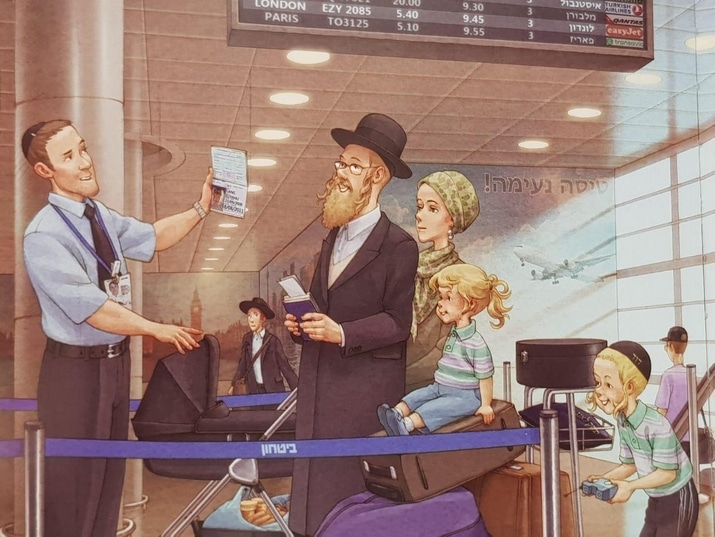 One merely needs to glance at the landscape of contemporary pop-culture to know that comic books, graphic novels and the super heroes within their pages have become entirely mainstream –  regardless of country, platform, or medium.

You may expect children and youths to be the primary audience of comic books and graphic novels – and in Israel, this is entirely the case. In 2017 the National Library of Israel acquired 1,056 children and youth books, 88 of them were comic books. It is no surprise that the target audience of the majority of books in the children and young adult category are from the secular sector of Jewish readership. What is surprising is that of the 88 comic books published last year, according to the annual National Library of Israel book report, 60 were aimed at the ultra-Orthodox, Haredi audience, written by and for the people of that community.

Included among these books is, “A Yiddishe Kop 2×2,” by the Haredi author and artist Gadi Pollak. This book is one of the Haredi comic books that got the stamp of approval from the Board of Supervision for Jewish Literature, an organization that reviews books aimed at the young Haredi audience and endorses them, determining the books to be educational and appropriate for the tender minds of Haredi readers.

It is, quite literally, a Kosher stamp of approval for a book that will most likely spend more time on the knees and tables of children and parents, rather than the bookshelf.

The seal of approval given by the board explains that, “Due to advanced technology, there is an abundance of reading materials available to our children, often coming from unknown sources. It has become imperative for parents to monitor what their children re reading, creating a need for a review board such as this one.”

The board also acts as both advocate and critic of the book. In their declaration of approval, they wrote: “The Jewish mind has always been known for its sharpness and swift thinking. This book, in an amusing and witty manner, stimulates the child to think, explore, be aware, work hard, and pay attention to details of Jewish existence and existence in total…”

The Haredi comic books focus mainly on Mussar, that is, ethics and morals. The aim of the books is to give context to children when it comes to day-to-day questions of ethics and the content is supposed to cultivate a spiritual morality and encourage spirituality in general, in language that is accessible to them.

The comics are also meant to make stories in the Hebrew Bible accessible to these young audiences. For example, “The Desert Diary: The Historic Journey of a Nation with Divine Faith Through a Wilderness to the Promised Land,” also by Gadi Pollack, is the story of a boy born in the desert as the people of Israel wander towards the land flowing with milk and honey. Pollack tells the story of “Ba’Midbar” (the book of Numbers), through the eyes of a child. As the blurb of the books says: “Brought to life like never before, this authentic story of the journeys of the Jewish people in the Midbar is presented with eloquent prose and stunning visual detail. What begins as a child’s diary of day-to-day life in Kadesh Barne’a, continues with a young man’s account of the wondrous miracles and challenging travails of the years in the wilderness and ends with a mature man’s anticipations as the Chosen Nation stood on the threshold of our promised land. “The Desert Diary” gives every reader the sense that he himself was among the Bnei Yisrael who left Mitzrayim.”

The spiritual council highly recommends this book citing it as: “Very worthy and recommended, a must have in every home.”

The Haredi comic books for children and young adults also have more general adventure stories like “The Fearful Heroes,” in which the Jews of Lublin save and rescue themselves from the Nazis. The representation of Gentiles is diverse and complex, including Native Americans, priests, and American GIs. The book asks its readers to overcome their fears and be daring in the face of danger and adventure. Of course, the book also includes lessons of ethics and good behavior. According to the spiritual council, “This book incorporates lessons of good measure, education, faith and security, with the hope that these messages will enter the readers’ hearts.”

The Haredi comic books are imaginative and are the stars of the bookshelves for the young and with good reason. While they are full of stories of Mussar and Sages, their accessibility and high artistic value surpass the original intended audience and enable the secular world to peek into the world of Haredi images, a world that the secular public may not know about.

There is no doubt that this is a popular genre in the Haredi community. Comic books and graphic novels are ubiquitous and they get the stamp of approval of the religious council that reads through the books for the express purpose of making sure they are appropriate for Haredi readers of tender years and impression, giving parents the peace of mind that the materials their children are reading are rabbinical approved.