That Time Seinfeld Did a Gig for the Maccabiah

This is how Jerry Seinfeld, Bill Maher and Billy Crystal found themselves telling jokes about Jews and sports in order to raise money for the 12th Maccabiah Games 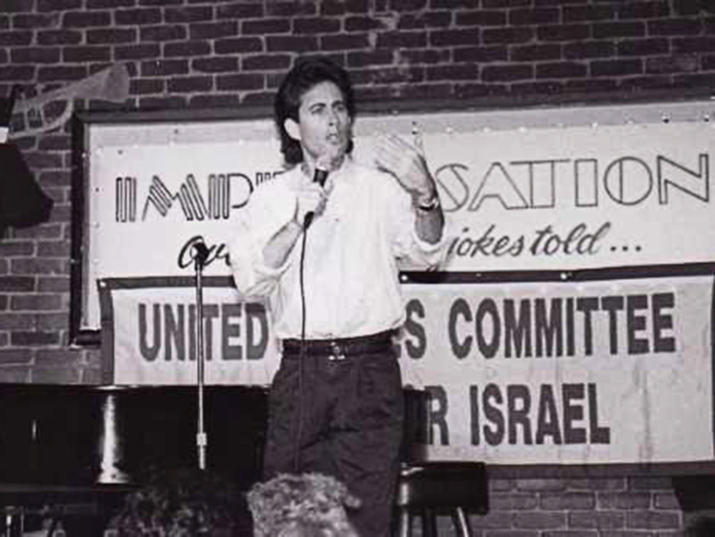 One evening in 1985, Billy Crystal, Bill Maher and Jerry Seinfeld, along with other Jewish comedians, all got together. The purpose of this meeting: Fundraising for the American delegation to the Maccabiah. We are proud to present you photographs of that fundraising evening, which took place four years before ‘Seinfeld’ was first aired.

“During the 1980’s I worked as a television producer and producer of stand-up comedy events, and I was looking for new ways to raise money for the American delegation to the Maccabiah. Friends suggested I put on a stand-up comedy evening, and I decided to go for it,” Joe Seligman explains how one fine day, Jerry Seinfeld, Bill Mahler and Billy Crystal found themselves telling jokes about Jews and sports to raise money for the 12th Maccabiah Games.

Seligman was active in ‘Maccabi’ for many years, and even participated in several Maccabiahs himself. In 1973, Seligman was a member of the American cricket team in the 9th Maccabiah, after he left a career as a baseball player. “I thought, how hard can it be to play cricket? It’s just English baseball. It turned out in the end that it’s definitely not English baseball,” he relates. He soon discovered that his first hurdle was to find other Jewish American players who were familiar with cricket, a mission which turned out to be much more complex than he had originally envisaged.

At the end of the day, most of the cricket players he located were former baseball players, and the American delegation struggled to play against more experienced teams such as India, England and South Africa – losing every game they played. Despite the dismal results, Seligman became hooked on Maccabiah, and has taken part in organizing the American delegation to each subsequent Maccabiah.

In 1985 he came up with the idea to put on a comedy evening to raise money for the 12th Maccabiah. Now, over thirty years after the event we are pleased to share the pictures from that evening.

The first evening was held in February 1985, at the Improv club in Los Angeles, (which is now a chain of stand-up comedy clubs, with branches in Chicago and New York as well). The event was emceed by the comedian Norm Crosby and the star of the Los Angeles Riders football team, Lyle Aldazo. On the stage appeared: Jerry Seinfeld, Bill Maher and Billy Crystal, all young and talented Jewish comedians, alongside such veterans as Shelley Berman and Dick Shawn. At the time, Jerry Seinfeld was a talented comedian who appeared in clubs and had made appearnces on the Tonight Show with Jonny Carson, but “Seinfeld” the sitcom would only go on the air four years later. Crystal and Maher were also well on their way to becoming major stars of the comedy scene.

The efforts were not in vain, and the evening was an overwhelming success: “There was room for 224 people in the club, and we sold 227 tickets – and there were those who managed to sneak in,” Seligman explains.  The American delegation was the largest delegation at the 12th Maccabiah, though it’s hard to say of the comedy fundraising event can be credited directly for that….

While we unfortunately, we do not have video footage of this memorable evening avialable, we can at least we can enjoy some photographs: