During the darkest period of his eventful life, a small black book gave light to the imprisoned Natan Sharansky, symbolizing his connection with his wife and with the Land of Israel 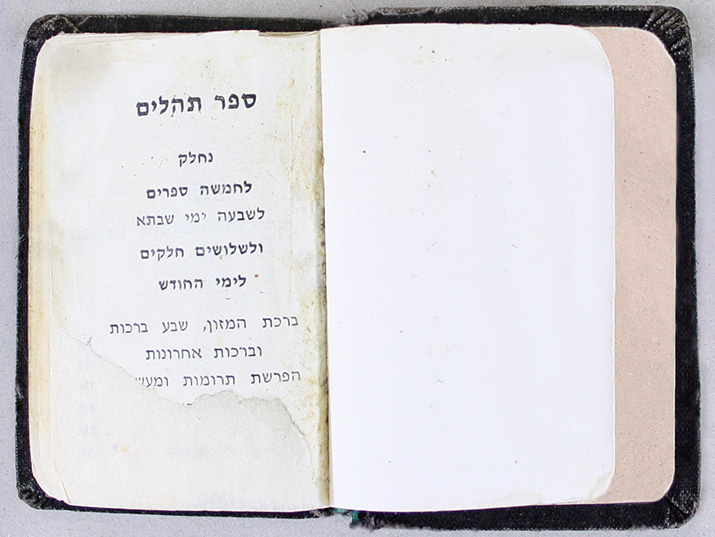 “On January 20th, 1980, my birthday, I was impatiently waiting for a congratulatory telegram from home…The next day I received an unexpected surprise – a real birthday gift! – when the official in charge of storing the prisoners’ belongings brought me a tiny book with a black binding, my Book of Psalms!”

This is how former Soviet political prisoner Natan Sharansky describes a rare moment of joy which he experienced on the 21st of January, 1980, when his prison officer gave him back his little black Book of Psalms. The book provided Sharansky with renewed hope throughout the long years of his imprisonment. He was never to be separated from this book ever again.

The book accompanied Sharansky during his most difficult years in prison. In his autobiography, Sharansky tells of how the book, given to him by his wife Avital on the eve of his arrest, was confiscated. As a religious book printed outside the Soviet Union, it wasn’t exactly recommended reading material in the Soviet prison system. At one point, when Sharansky was being transferred from one prison to another, the book was temporarily returned to his possession.  The prisoner took advantage of this opportunity and tore out the page which indicated the book had been printed in Israel. When asked about it later, Sharansky described it as a “book of folklore”. It was only thanks to this that the prison authorities finally agreed to return the book to him.

“The Psalm book was the sole material evidence of my mystical tie with Avital. What impelled her to send it to me on the eve of my arrest? And how did it happen that I received it on the day of my father’s death? The reading of the Psalms not only reinforced our bond but also demystified their author. King David now appeared before me not as a fabled hero or as a mystical superman but as a live, indomitable soul – tormented by doubts, rising against evil, and suffering from the thought of his own sins.”

In 2014, Natan Sharansky visited the National Library of Israel. One of his meetings was with the director of the Conservation and Restoration Department, Timna Elper.

“I was so excited to meet Sharansky,” she said, “I told him of the impact that the story of his Psalm book, as he described it in his autobiography, had on my life.” Sharansky then pulled the tiny book out of his pocket and showed it to her. It wasn’t in great shape, as could be expected after years in a Soviet prison.

Upon seeing the state of Sharansky’s book, the Library administrators who accompanied the visit offered to restore it.

The book was given thorough treatment in the Library’s facilities.  The heavily damaged cover was restored, torn pages were mended and and the many eroded page corners were treated using the Conservation and Restoration Department’s unique techniques. Finally, on the 8th of May 2014, the Psalm book was returned to its excited owner.

Towards the end of his autobiography, Sharansky writes about his very last moments of imprisonment, all those years ago, just before he stepped onto the plane that would take him to freedom:

“You received everything that was permitted,” answered the intellectual in an unexpectedly rough tone. He signaled to the tails to take me away. I quickly dropped to the snow.

The photographers were aghast, and pointed their cameras to the sky.

After a brief consultation the boss gave me the Psalm book. I got up and quickly mounted the ramp.