As peace talks between Israel and Egypt began, former Israeli Prime Minister Menachem Begin had the chance to tour the historical treasures of what had long been an enemy state. 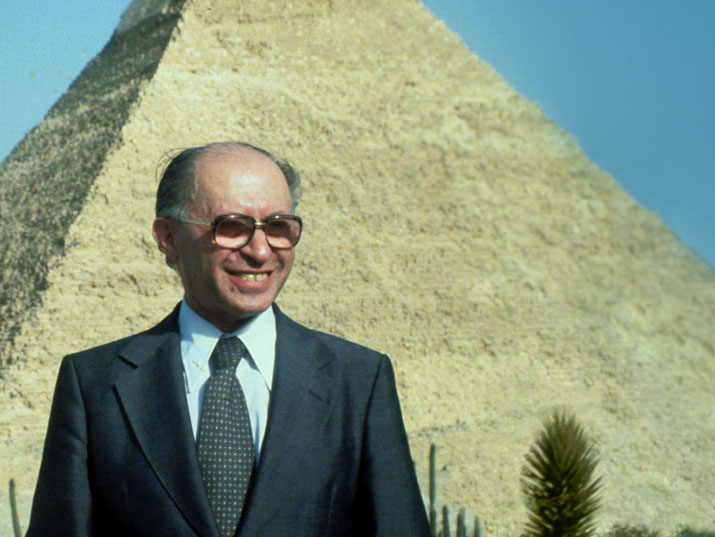 Throughout the peace talks between Israel and Egypt, as well as in the years following the signing of the peace treaty between the two countries, Israeli Prime Minister Menachem Begin made several trips to neighboring Egypt.

Despite a busy schedule, the Prime Minister and his entourage couldn’t resist the opportunity to visit the Aswan Dam and other historic locations in between meetings with Egyptian President Anwar Sadat. They toured some of the most well-known sites associated with ancient Egypt, including the Temples of Abu Simbel and the tombs of the pharaohs in the Valley of the Kings.

Begin’s entourage included photographers from the Israeli press corps. They too were thrilled by the visit to the Valley of the Kings. “It is impossible to describe the excitement that gripped everyone on the plane when the pyramids suddenly came into view,” recalls photographer Dan Hadani, whose collection of press photographs is currently archived at the National Library. “To think that the People of Israel were once slaves in Egypt, and then to actually see the places that our forefathers may have built…”

To this day, an official, framed certificate hangs in Dan Hadani’s home, commemorating his taking part in the first El Al flight to Egypt. “They treated us like kings,” says Dan Hadani. “It was like a dream.”

Here are some of the extraordinary pictures in which we see the former Prime Minister experiencing Egypt as a tourist, and not as an adversary.

And finally, here are several photos captured by Government Press Office photographer Moshe Milner during a visit to Egypt a few days after the signing of the peace treaty.

Right Before Their Fatal Mission, Jewish WWII Soldiers Took These Incredible Pictures of Egypt Begin and Sadat Unscripted: Photos Reveal the Personal Connection Between the Two Leaders A Glimpse into the Diary of Sayad, an Egyptian Soldier in the Yom Kippur War