The Story of a Sculpture: The Roaring Lion of Tel Hai

A century has passed since the Fall of Tel Hai; This is the story of Abraham Melnikoff’s Roaring Lion sculpture 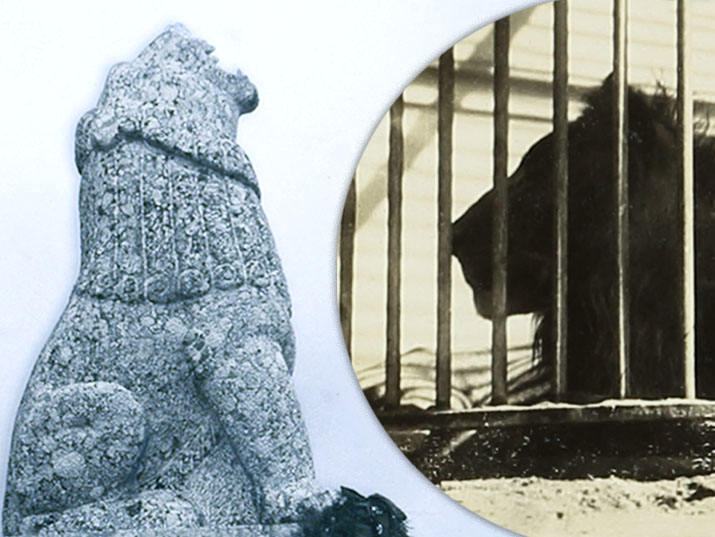 “Are you familiar with Melnikoff?” Dan Ben Amotz and Haim Hefer ask their readers at the beginning of one of the Hebrew stories in the collection of yarns and doubtful accounts known as Yalkut HaKzavim (A Sack of Fables). “This story isn’t about his brother or his father. It’s about him,” they continue, assuming that at the time of writing, every Israeli knew exactly who they were talking about. We’ll come back to this tall tale which became popular among the fighters of the Palmach because, amazingly, most of it is true. But first, for those who still don’t know who Melnikoff is or what we’re talking about, let us begin with a brief introduction, with the help of documents from his personal archive, preserved at the National Library, which hold answers to some of the riddles surrounding his life.

Few who visit The Roaring Lion sculpture which stands beside the burial place of Joseph Trumpeldor and his comrades at Tel Hai notice that the creator of this impressive memorial is also buried nearby. Abraham Melnikoff, one of the founding fathers of modern Hebrew sculpture, found his final resting place among the graves of members of the “HaShomer” organization, at the foot of the memorial he is most identified with. But Melnikoff’s turbulent life began far from the Galilean hills. He was born in 1892 in Bessarabia, a region that was at the time under the rule of the Russian tsar.

The sensitive youth who showed a talent for drawing was sent by his parents to Vienna to study medicine, despite his own objections. Shortly after, differences of opinion about the future of his studies led his parents to cut off financial support. Subsequently, he left school and began to travel, eventually reaching the United States. There, he would later tell, he met the famous author Jack London, whom he befriended. The two were even arrested by local police, after one of their frequent evenings of carousing ended badly.

The desire to study art eventually won out over a life of travel and adventure and in 1917, the 25 year-old Melnikoff registered for art school in Chicago. Yet, despite his brilliant talent and his teachers’ promises of a bright future, he could not stay the course there either, and in March 1918, Melnikoff volunteered for the Jewish Legion. He would never again see his young wife or daughter, who was born a few months earlier and given the name Bat Zion.

The battles in the Middle East were soon over, and after a short stay at a British army camp in Egypt, Melnikoff arrived in Palestine. He would return to Egypt a few years later on a quest after an image of the roaring lion.

Even after he took off his uniform and became one of the leaders of the community of young Hebrew artists who rebelled against the Bezalel School of Arts and Crafts, Melnikoff continued to take up arms when needed. The strong, muscular young man was one of Jerusalem’s defenders during the 1920 riots, and the news of the fall of Trumpeldor and his comrades in the Galilee had left him stunned.

Melnikoff demonstrated his talent as a sculptor in many impressive monuments erected throughout the country, the largest and most striking of which was the memorial to General Allenby in Beersheba. This sculpture would one day cause him great pain after it was shattered by a mob of angry rioters.

Nevertheless, the twenties still marked the high point of his creativity: Melnikoff, who headed the Jewish Artists Association, was chosen to create the memorial sculpture for the grave of the Zionist author and philosopher Ahad Ha’am, and he had plans for many other large memorial sculptures.

The opportunity Melnikoff had been waiting for came at the end of 1928, when the philanthropist Sir Alfred Mond, appalled that a monument to the defenders of Tel Hai had yet to be erected, decided to finance it himself. He personally chose Melnikoff to carry out the project of creating what was perhaps the first ever modern national-Zionist memorial.

The energetic artist presented the heads of the national institutions overseeing the project with an organized proposal. He had in mind to create a sculpture in the shape of a roaring lion made of stone from the Galilee near Tel Hai. Yitzhak Sadeh was recruited to help Melnikoff and together they located the stone that workers would quarry under Sadeh’s direction, to be delivered to the artist.

We will skip over the bureaucratic obstacles Melnikoff faced even before the quarrying began, and return to that tall tale at the start of our story. What did Ben Amotz and Hefer have to say about Melnikoff?

“When Melnikoff was asked to make the sculpture of the lion for Trumpeldor’s grave,” they recounted, “he said that first he needed to see a real lion. And, so he was told: Go, find yourself a lion. And in those days there was not a single lion in the country to be seen. He went to Dr. Bodenheimer in Jerusalem who knew something about animals and asked him, in German, where one could find a real lion. The doctor replied: Go to Cairo. And so, off he went to Egypt. Once there, he asked: Where is the zoo? The reply he received was: “Can you hear the roars of the desert beasts? There you will find the zoo. He walked and walked, until at last he arrived. … and once there, he ran straight to the lion cage.” Hefer and Ben Amotz vividly describe how Melnikoff had to bribe the Egyptian official in charge in order to aquire a permit to enter the lion cage and sketch the animals.

Photographs and documents preserved in Melnikoff’s archive show that this story was in fact not a tall tale at all: Melnikoff did consult with Shimon Fritz Bodenheimer, one of the first zoologists in Mandatory Palestine, who helped him get to Egypt and to the zoo in Giza. We can assume that Bodenheimer was very familiar with this huge zoo which first opened in 1911. Although we have no record of the bribes Melnikoff was forced to hand over to the official in charge, it is reasonable to assume that this was the case. But what was amazing was that instead of the paper and pencil which, according to the story, Melnikoff took from his pocket, he pulled out a camera he had been given, which he promptly began to use to document the lions he saw there. The photographs of the lions from the Giza zoo in Melnikoff’s archive show the help he received from the local staff in holding them in poses necessary for preparation of the sculpture. It is remarkable to think that the Egyptian lion documented here was the model in whose image one of the most famous Zionist monuments was created. 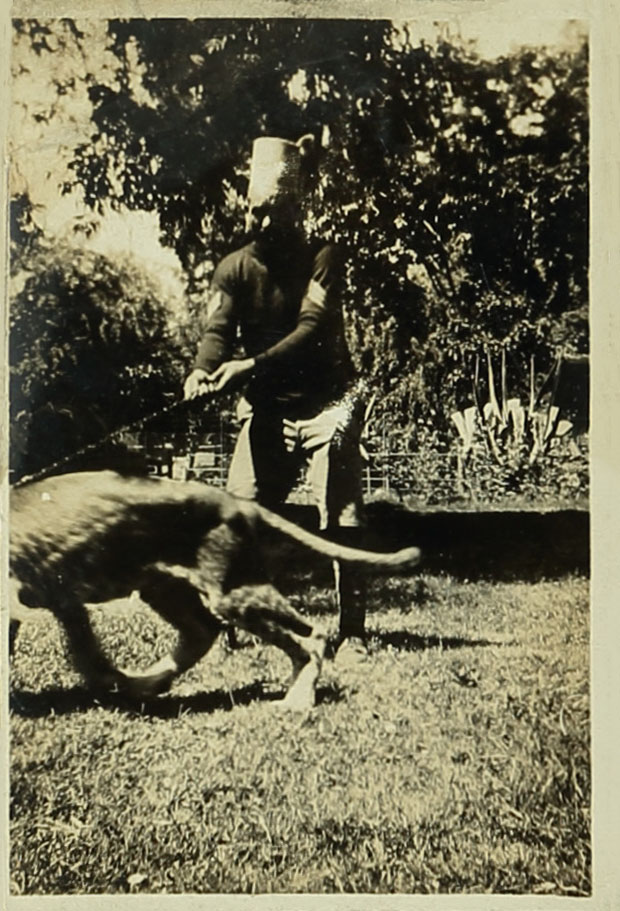 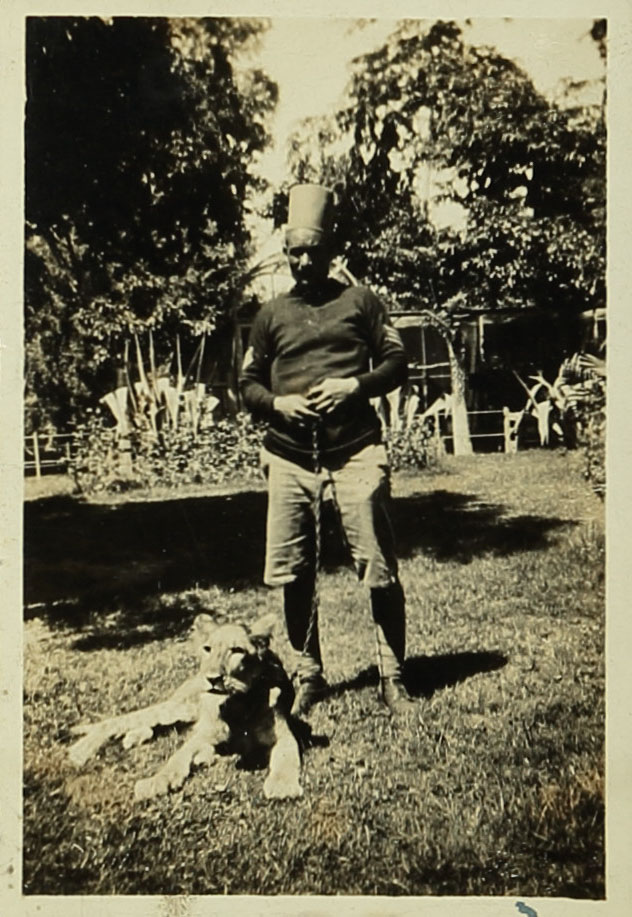 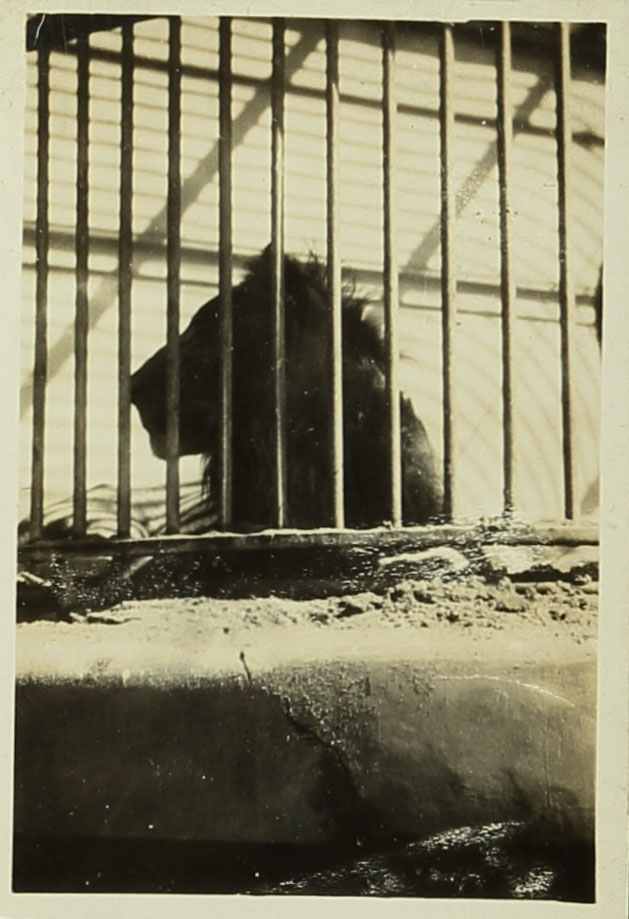 The stone Melnikoff chose was quarried only at the end of 1930 after which he began the difficult work of sculpting. The few blurry photographs that survive among Melnikoff’s papers reveal an unknown part of the process – that of dragging the stone to the site using extremely primitive methods.

Melnikoff documented the moment captured by his camera in his memoirs: “The stone block began its final journey to the base of the monument at 11 o’clock in the morning and was in place at 5:30 in the afternoon. After two years of hard, technical work, I saw the monument’s proportions for the first time. It was very impressive, but I have to admit it was swallowed by the surrounding space.” 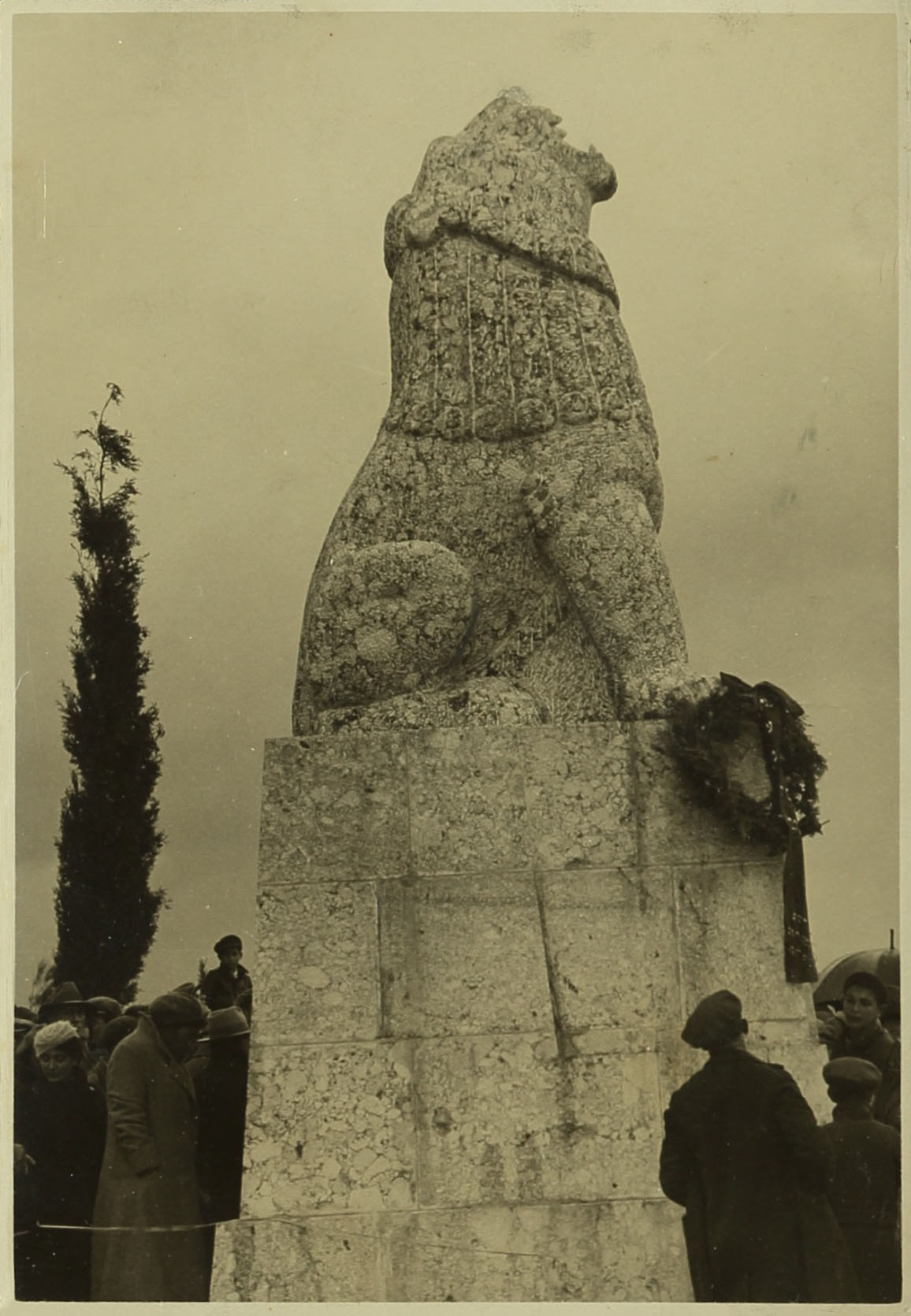 The monument was unveiled on February 23, 1934, approximately five years after the work on it had begun, and nearly fourteen years after the fall of Tel Hai. Under heavy rain, an impressive ceremony was held in which the entire leadership of the Yishuv took part. Melnikoff did not wait for the scathing reviews that soon spread, and a few days after the ceremony he left the country. The British Zionist lawyer and leader Harry Sacher invited him England to create portrait busts of his family, promising him good work conditions and a generous salary, perhaps as compensation for Melnikoff’s suffering and sacrifice during the difficult years of work at Tel Hai.

This time, Melnikoff didn’t abandon his family. He second wife, Charlotte, and their young daughter Chava, soon joined him, and they eventually settled in London.

The next few years were successful ones for Melnikoff: he retreated from his daring style but won recognition from members of the British aristocracy, government, and upper class. Men and women flocked to the side of the daring Russian-born fighter who had created a sculpture of General Allenby in the middle of the desert in Palestine, was an amazing violinist, and even wrote short stories in polished English. One of the highlights of his success was sculpting a bust of British Prime Minister Winston Churchill, who was willing find time from his busy schedule to sit for the artist.

The World War II years were difficult: Melnikoff’s London studio was badly damaged in a German bombing along with many of his finished works. He was forced to leave his beloved wife (who died in 1949) and send his only child away to a boarding school.  A heart attack in 1952 caused him to consider returning to Israel, but years passed and he was unable to fulfill this dream. In the meantime, his daughter Chava returned to Israel and adjusted well to life there.

Melnikoff planned his trip to Israel for a long time, but was only able to go through with it after much cajoling from friends and family. In November 1958, a friend from London wrote to Chava Melnikoff: “[Melnikoff] hasn’t decided yet which kibbutz to join, Kfar Giladi or another one. He will have to use his money to build a studio on the kibbutz but will get housing from the kibbutz […] He seems to me very pleased with the fact that he is traveling to Israel and especially about meeting with you soon.”

When Melnikoff arrived in Israel, in the summer of 1959, he was a completely different person from the young artist who had left 25 years before. As his health worsened, his plans for new sculptures and monuments faded. A group of sculptures he had packed to bring with him arrived after many difficulties along the journey from London, and he was required to pay duty tax in order to release them from customs at the port of Haifa. On his way there, Melnikoff suffered a stroke and he died shortly after. We will leave the sad story of what became of his sculptures and artistic legacy, which have largely disappeared, for another time.

One week after his death, on September 5, 1960, Abraham Melnikoff was interred in the cemetery in Tel Hai. His final resting place, as he requested, is at the foot of the monument of the roaring lion, which was his pride. More images of the erection of “The Roaring Lion” sculpture

If you liked this article, try these: The Egyptian Belly Dancing Sisters with a Secret Jewish Identity In the Shadow of Death: The Revival of the Jerusalem of Lithuania An Enthralling Journey: The Changing Land of Israel Over Three Centuries