The German Martin and the Jewish Mordechai: When Buber and Heidegger Met in 1957

Hidden away in the Mordechai "Martin" Buber’s archives is a series of photographs in an envelope, labeled: “unidentified.” Why was the evidence of a friendly meeting between Buber and Martin Heidegger downplayed? 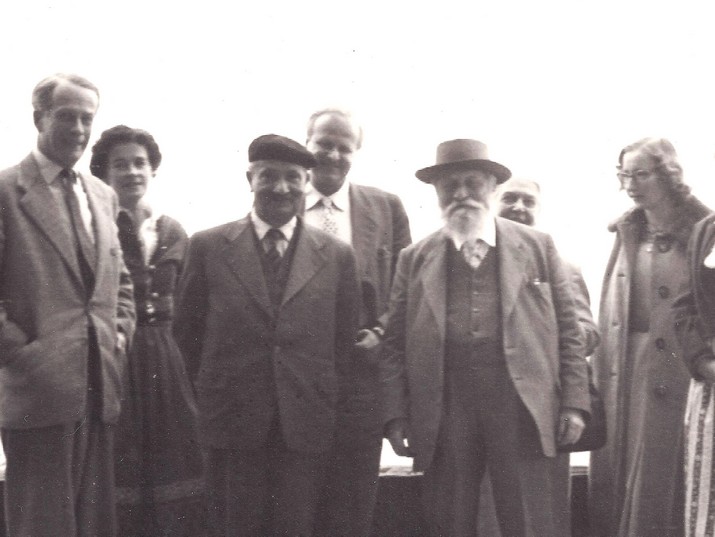 A photograph of the participants in the meeting. Front center: Heidegger and Buber

Martin Heidegger (1889-1976), one of the greatest philosophers of the 20th century, became a controversial figure after WWII. Heidegger was among the most prominent of the many German intellectuals who collaborated with the Nazi regime during the Third Reich, or at least, identified with it and took no position against it. As an original and seminal thinker who placed human experience at the center of his thought and viewed humanity as the supreme cause of everything, Heidegger had a profound influence on Jewish intellectuals of his day, mainly among German Jewry.

Heidegger was an outstanding student of the German-Jewish philosopher Edmund Husserl, the founder of phenomenology, and with the latter’s retirement in 1928, was selected to replace him at the University of Freiburg. His most important book, Being and Time (Sein und Zeit), published in 1927, was dedicated with admiration to his teacher Edmund Husserl, even though in effect, the book took a stand against some of Husserl’s foundational assumptions, and some viewed this dedication as a key to understanding the deep and complex relationship between two generations of philosophers.

In 1933, with the Nazi rise to power in Germany, Heidegger warmly welcomed their emergence. Just a few months after Hitler took over the national government, Heidegger officially joined the Nazi Socialist Party, and as a mark of distinction for this step, he was appointed rector of the University of Freiburg, a job from which he resigned after just one year of office. During that year, Heidegger took various steps intended to gratify the government, including various racially based attacks on Jewish colleagues.

One of the symbolic acts for which Heidegger was condemned and his reputation blackened as a Nazi collaborator was the directive to revoke the privileges of his elderly teacher, Husserl, as a Professor Emeritus at the University of Freiburg, due to his Jewish origins (even though Husserl had converted to Christianity). In the second edition of Being and Time, published in 1941, Heidegger, apparently under pressure from the publishers, removed the dedication to Husserl. Hannah Arendt, who was one of Heidegger’s best known students, and of whose intimate relationship with him much has been written, claimed that with this harsh attack of a student against his teacher, Heidegger hastened Husserl’s end, and even indirectly caused his death. Heidegger’s problematic relationship with Hitler and Nazism was even more clearly manifested by the way in which it percolated into his philosophical thought. His book Introduction to Metaphysics (Einführung in die Metaphysik), published in 1935, for example, included excerpts from a speech he delivered at the University of Freiburg in which he justified the supremacy of Hitler’s rule and the Third Reich.

After WWII, Heidegger was a pariah. The attempts to clear his name, – even by Jewish students such as Hannah Arendt – actually led to a reverse result. His philosophy, like his personality, was considered an abomination among many within and outside of Germany. The connection between him and Martin Buber after the Shoah therefore seems impossible, even for a liberal person such as Buber, who preceded many in his forgiving approach to Germany and the Germans. In Martin Buber’s biography by Maurice Friedman, Friedman quotes Buber’s writings, according to which “Heidegger the man was much more, in my view, than his writings.” Elsewhere, Buber is quoted as saying that all he had to state in condemnation of Heidegger had already been written when it happened, and therefore, there was no point in revisiting past events. However, Buber never related to Heidegger in his writings or public statements. Heidegger, for his part and quite surprisingly, testified in one of his interviews in the West-German media that he knew Buber’s name “from hearsay only,” and never knew him personally. At the same time, there is no doubt that Heidegger was very familiar with Buber’s writings, and even pressured the publisher of the festschrift in honor of his fiftieth birthday to approach Buber and ask him to translate an article for the volume. Buber refused, claiming that his failing health due to age prevented him from accommodating the request.

Any mutual fear of public friendship and the fog surrounding the personal relations between the two evaporates in this series of photographs, which documents a friendly and warm meeting held in the late spring of 1957. With the picturesque Alps in the background, the two men met for two full days at the castle of Prince Albrecht von Schaumburg-Lippe, during which they discussed the preparation of an international conference on language (“Die Sprache”). The prince who hosted the two philosophers in his castle was the brother-in-law of Clemens Graf von Podewils, 1905-1978, who at the time was director of the Bavarian Academy of the Arts in Munich. Another partner in organizing the historical meeting between the German philosopher and the Jewish philosopher was Carl Friedrich von Weizsäcker, a physicist and philosopher of science in his own right, and the older brother of the president of West Germany elected in 1984. These two facilitators were organizing the conference under the auspices of the Bavarian Academy and wanted to summon Buber and Heidegger to a discussion on its content and goals. The meeting between the two was held, therefore, in a pleasant atmosphere, far from the public eye.

Buber conceded, according to the testimony of one of the participants, that immediately a bold friendship took hold between these two elderly men, who were unafraid of mocking the prejudices against Jews on the one hand, and against the Nazi rector on the other. In the photographs, the two can be seen smiling, and in a few of them, Paula Buber appears, sitting alongside her husband at one of their shared outdoor meals. Ultimately, due to Paula Buber’s sudden death just a few months later, Martin Buber cancelled his participation in the conference, and it was therefore not held as planned.

The fascinating discussions between Buber and Heidegger at that historic meeting were recorded with characteristic fastidiousness and precision by von Weizsäcker, who understood the historical significance of this once in a lifetime dialogue. Blame, atonement and forgiveness were some of the topics discussed between the two, a Jewish philosopher of religion and a Christian philosopher who denounced religion, united to a great extent by their interest in the relationship between man and the Divine.

A personal dedication by Heidegger in his book about Hebel: 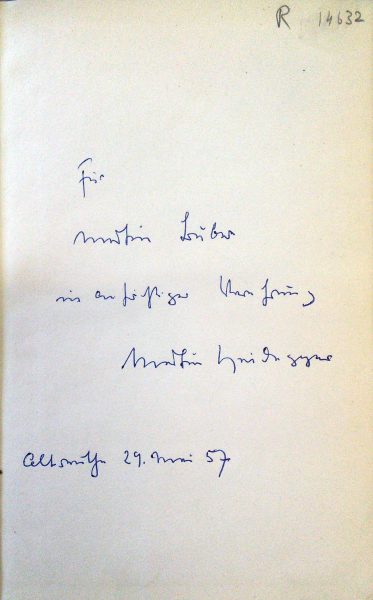