Into the Depths of Evil: How the Nazis “Recruited” the Talmud for Anti-Semitic Propaganda

Home > Antisemitism > Into the Depths of Evil: How the Nazis “Recruited” the Talmud for Anti-Semitic Propaganda
Diaspora

It was the Talmud, more than any other book, which the Nazis used as conclusive proof of Jewish inferiority and the racial danger posed by the Jewish people. 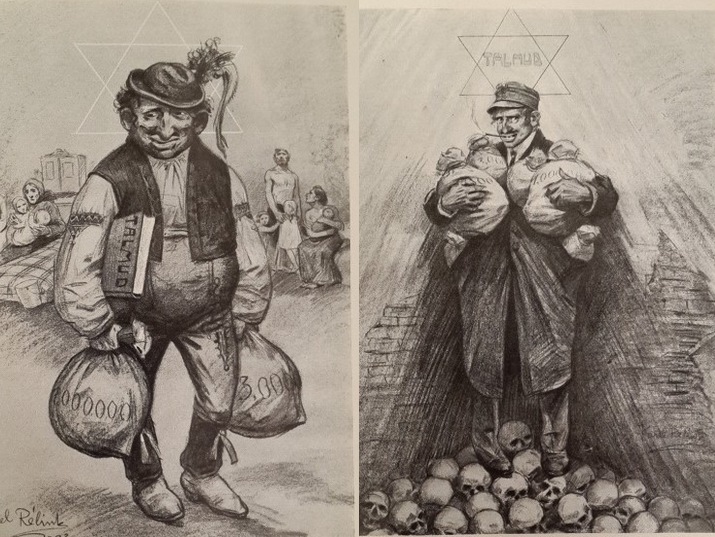 The burning of books in Berlin, 1933. Source: Bundesarchiv, Germany

In the previous article, we discussed religiously motivated Christian attacks on the Talmud. As we saw, the Talmud was identified with the refutations and lies the Jews (allegedly) spread against Jesus, and Christianity in general.

The Nazis too did not remain neutral regarding the Talmudic period. They did so with racist motives. The Nazi party took power in 1933 at a time of an increasingly anti-Semitic atmosphere in Germany due, amongst other reasons, to their defeat in the First World War.

The anti-Semitic publications were not long in coming.

One of the harshest anti-Talmudic publications of this period is a booklet of caricatures published by the anti-Semitic newspaper Der Hammer named “The Jewish Appearance“. The artist Karl Relnik drew 35 clearly anti-Semitic illustrations and connected them all to words from the Talmud. On each picture is a quote from the Talmud, but the editor “forgot” to state the exact source of each quote, making it impossible to check its accuracy. Some of the pictures also have explanatory sentences from the writings of August Rohling (see the previous article) and others. 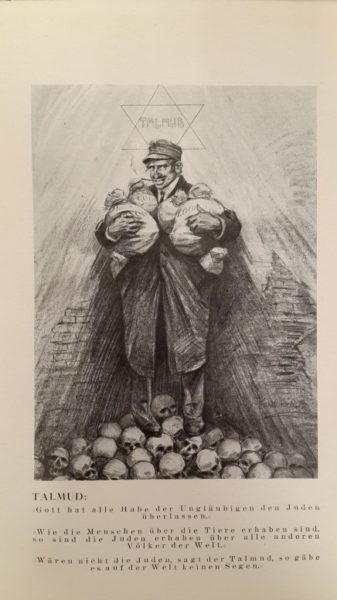 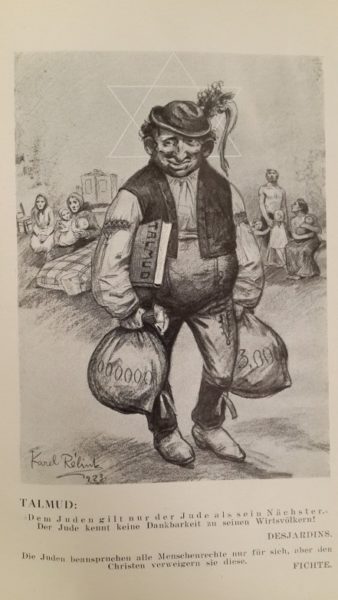 One of the prominent figures in Nazi Germany was Julius Streicher, editor of the anti-Semitic newspaper Der Stürmer. Many Nazi intellectuals published venomous and detailed attacks on Judaism and its literature in that newspaper, primarily against the Talmud. During his trial in the Nuremburg Trials, Streicher admitted that he had read the Talmud at great depth and considers himself a leading expert in Jewish works, mainly the Talmud.

However, the highest-ranking Nazi to write about the Talmud was undoubtedly Alfred Rosenberg, the Nazi movement’s chief ideologist and later the one responsible for the occupied territory in Eastern Europe. Rosenberg claimed self-righteously that, “When we attack the Jews, we are not doing so out of disregard of freedom of thought, as they claim, but to attack a legal viewpoint which completely contradicts that of all countries.”

He claims that the more moral thinking is entrenched in a nation, there is less need for instructions and orders about behavior. The fact that Jews have so many commandments and that Jewish law delves into the most minute details of Jewish life, proves their lack of moral understanding. Therefore, the Jews only adhere to and emphasize control of technical instructions.

In a booklet which he published, Unmoral im Talmud (“Lack of Morality in the Talmud”) in 1920 and again in the 1930’s, Rosenberg quotes a selection of sayings from the Talmud and the Shulchan Aruch (the Code of Jewish Law), which ostensibly attest to the Jewish people’s moral inferiority. He begins with an introduction which describes the significance Jews attach to the Talmud, and says that approximately two thirds of the Jewish people still adhere to it 2000 years later.

Rosenberg contends that the opinions of Jews who are seemingly unaffiliated with the Talmud is also impacted by what is written in the Talmud, as its content is ingrained in the Jewish people. The Jews have double moral standards, and act among themselves with different moral standards than those they display toward gentiles. Rosenberg’s book is divided into six chapters: Jewish dialectics, love and marriage, law and justice, about service, Jesus and non-Jews and the Shulchan Aruch. Each chapter begins with a short explanatory foreword, followed by a list of relevant quotes.

One of Rosenberg’s senior staff members was Dr. Johann Pohl, who was responsible for the looting of many of the Jewish libraries in Eastern Europe. Pohl studied Catholic theology and wrote two doctorial works, one on the prophet Ezekiel and the other on the Jewish family during the period of the prophets. He visited the Land of Israel and studied Bible and Hebrew at the Hebrew University. He even published articles about the archeology of the Land of Israel. He later became a librarian in the field of Judaism and advanced to the important role of managing the library of the Institute for the Study of the Jewish Question in Frankfurt. He wrote articles on the topics of Judaism, Zionism and Talmud, and even an article about the libraries in the Land of Israel in the Germany librarianship journal Zentralblatt fur Bibliothekswesen. Interestingly, in that article he refers to the Jewish National and University Library (today’s National Library of Israel) and its collections. He mentions its founder, Dr. Joseph Chasanowich; the library’s director, Dr. Hugo Bergman; and other important figures such as Gershom Scholem and Avraham Schwadron.

Pohl also wrote two books about the Jewish Talmud – a booklet named Die Religion Des Talmud and a longer book named Talmud Geist. In this book, Pohl explains the structure of the Talmud and each Jew’s obligation to fulfill what is written in it, including Jews who do not define themselves as religious. The book is replete with quotations emphasizing the Jewish hatred of gentiles and the belief that Jews are the chosen people. It is interesting to note that the book’s cover picture was from a censored edition of Maimonides’s Hilchot Avodah Zara [Laws of Idolatry].

Karl Georg Kuhn, one of the foremost experts on Judaism in Nazi Germany, presented a different approach to the Talmud. He studied Protestant theology, Semitic languages and New Testament Studies in the Jewish Theological Seminar and in Tübingen University. He was appointed as a lecturer there years later and taught courses on Talmud, Zionism, the Jewish question and Judaism’s attitude toward Christianity in the Talmud and the Shulchan Aruch. In contrast with previous attackers of the Talmud, he avoided provocative words of hatred and even wrote critically about those who did. He focused on the Talmud as scientific research. He did not use the writings of Eisenmenger, Rohling and their ilk, but based his writing on more academic and neutral sources.

Kuhn’s attacks on the Talmud were much more complex and scholarly than those of his predecessors. Instead of attacking the books’ content, Kuhn attacked the entire structure of the Talmud. He saw the Talmud as a legal, spiritually empty text, which embodies the entire spirit of Judaism and the Torah as a collection of different narratives. He dated Judaism itself to the period of Ezra the scribe, who he claimed to be the one to link the Torah to the Jewish religion as a Godly work. He directed his in-depth attacks toward rabbinical Judaism and its form of thinking. He published his thoughts on this matter in three long articles in the journal of the Institute for the History of New Germany, Forschungen zur Judenfrage, and later in a booklet which he published in 1939.

The Quote That Never Was

The same quotes repeat themselves over and over again in the various publications. One of the most “condemning” quotes, which appears in articles and books over the past 120 years, is from a non-existent source.

This popular source is “Libbre David 37”. There, according to the common quote, is written that “If a Jew should wish to explain some of the Rabbinic literature, he must only provide a false explanation. One who transgresses this commandment will be put to death. Providing information about our attitude toward the gentile religion would be equivalent to killing all the Jews, for if the gentiles would know what we teach about them, they would kill us.”

There is no source named “Libbre David” in any Talmudic tractate or any other Jewish book.

It could be referring to the Book of Psalms, as “liber” is book in Latin and most of the psalms are attributed to King David, but there is still no text there matching this “quotation”. Psalm 37 tells of the fall of enemies of the Jews, but does not make any mention of keeping the secrets of Judaism and the danger in revealing them. There are those who claimed it to be a spelling mistake and as referring to the book “Divrei David”. It is indeed written in this way in the introduction to Alfred Rosenberg’s book, where he quotes it. There are several books named “Divrei David”. The first published (Lublin, 1671), was the book of Rabbi David Lida. Interestingly, one of Rabbi David Lida’s acquaintances was none other than Eisenmenger (a Christian philosopher we discussed in the previous article), who claimed at the time to be interested in Judaism in order to convert. I went through the entire book and did not find any connection to the quotation under discussion. The theologist and orientalist Hermann Strack wrote that he went through three different books named Divrei David and did not find any mention of the quoted words of hatred. Theodor Fritsch, in his book Beweis-Material gegen Jahwe, and Joseph Bloch, in his book Israel und die Völker , attribute the “Libbre David” to two vague sources.

A search for the words “Libbre David 37” in an online search engine will yield thousands of results from different forums, Neo-Nazi websites and radical religious websites. All provide the same quote, but none of them explain what the book Libbre David is.

Anti-Semitic publications do no have to be accurate.

Many books and articles were written against the Jewish Talmud over the past hundred years. In this article (and the previous article) we only discussed some of the most influential of them. All the books mentioned are found on the shelves of the National Library, not far from the thousands of different editions of the Talmud itself.