The personal letters Lucie Dreyfus sent to her husband Alfred and the extensive correspondence she conducted with the authorities reveal the tremendous efforts she exerted and the personal aspect of one of the most notorious anti-Semitic affairs in history. 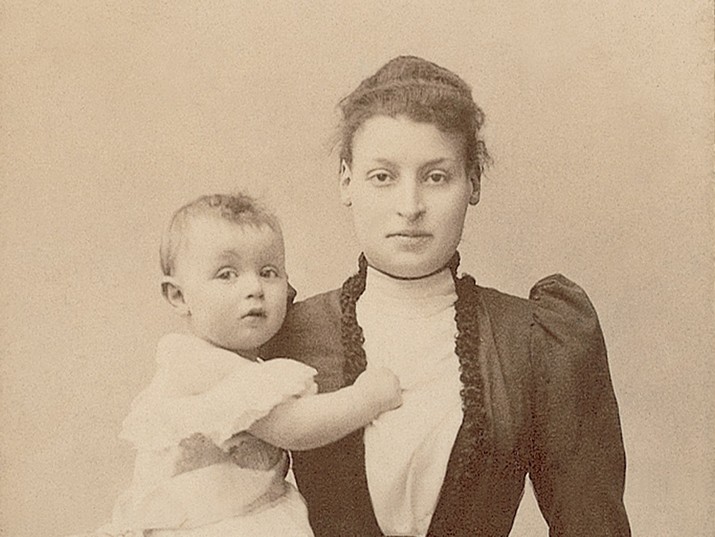 Lucie and Pierre Dreyfus, a photograph from 1891. The Dreyfus Family Collection

On October 15, 1895, Alfred Dreyfus, an officer with the rank of captain in the French General Staff, was asked to report to headquarters at nine in the morning in civilian clothing for “an examination of the trainee officers”. Despite the puzzling request, the captain remained unperturbed and parted from his family as he did regularly. It was a pleasant morning, and his three year old son Pierre insisted on escorting him to the front door. The memory of this parting, Dreyfus later wrote in his memoirs, is what helped him cope with everything the following years sent his way.

Colonel du Paty de Clam, who was sent to question Dreyfus, wasted no time and dictated a document to the captain under express orders that he “be fastidious with his writing”. At the end of the dictation, the colonel rose wildly from his chair and declared “I arrest you in the name of the law, you are accused of a serious crime of treason.” Dreyfus was imprisoned in a military jail and was forbidden to contact his family.

During a period of increasing national paranoia – a period in which the French Republic was rife with rumors and reports of treason and the sale of secrets to the German arch enemy – the suitable scapegoat had been found in Alfred Dreyfus.

When a secret document containing a series of military secrets was found being offered for sale, suspicion fell on Dreyfus, the only Jewish officer on the French General Staff. At the end of a short military trial he was convicted of treason and sent to lifelong exile on Devil’s Island, which is close to the shores of French Guiana in South America.

The story did not end there. Before being sent to Devil’s Island, the astounded Dreyfus was forced to undergo a terrible ceremony of degradation in which he was denounced as a traitor to the Republic. During the ceremony, which was held in the courtyard of the military school in Paris, he was stripped of all his ranks, his sword was taken from him and broken and the furious crowd which had gathered screamed anti-Semitic expletives at him.

Despite the drastic deterioration in his physical and mental health during his time in jail, until his dying day, Drefus refused to believe that it was hidden anti-Semitism in the army which led to his terrible ordeal.

Upon his arrest, he was given the opportunity to choose the only “honorable way out” in such cases – a loaded revolver was placed in his cell to enable him to take his own life. To the jailers’ great surprise, Dreyfus refused to make use of the revolver and continued to protest his innocence. From the moment he was denied his freedom and his personal dignity, Dreyfus’ family decided to serve as his mouthpiece and worked tirelessly for his acquittal.

While his brother Mathieu acted within legal and diplomatic channels to obtain a re-trial and acquittal for his older brother, Lucie Dreyfus – Alfred’s beloved young wife – decided to invest all her energy into improving the new prisoner’s living conditions.

She sent him letters regularly, in which she updated her husband about their children, his brother’s tireless efforts for his acquittal, and of course, offered him words of encouragement and compassion. In a letter sent on January 16, 1895, Lucie wrote worriedly: “How are you my poor beloved, do you not feel weak because of the prison regime, you, who are in such need of fresh air and movement?”

It can be assumed that she was aware of the conditions in which her husband was imprisoned, and that she knew Dreyfus spent his five years on Devil’s Island living in a filthy shack. Temperatures sometimes reached 120 degrees fahrenheit. No amount of pleading from her would have changed the basic circumstances of his imprisonment, and therefore she tried to ease his lot in different ways. She conducted extensive correspondence with the Ministry of the Colonies, which was responsible for prisoners such as her husband.

On July 2, 1895 she received a reply: “Madame, you contacted our offices in order to receive permission to send fifty bottles of condensed milk to your husband (…) as according to law the exile Dreyfus has the right to take care of his needs and his food at his own expense, I do not oppose you sending these food products directly to Guiana…”

Other letters which she sent and received from the Ministry of the Colonies prove how persistent Lucie was in her fight to improve her husband’s conditions. Documentation from the archive reveals that Lucie received a letter from the Minister of the Colonies himself, André Lebon, informing her that he rejected several books she sent to her husband under the pretext that their pages were not properly cut.

Resourceful Lucie found a solution, and in a later letter the director of the prison informed her that all the travelogue books she sent to her husband were approved and  passed on to the prisoner.

In 1899, the pro-Dreyfus coalition (known as the “Dreyfusards”) succeeded in securing a re-trial for the convicted officer. When Dreyfus was informed about the re-trial, he immediately sent a moving letter to his wife’s parents – the Hadamards – in which he expresses deep gratitude to their daughter for her support, support without which he would not have survived the grueling period of imprisonment. Why did Dreyfus send the letter to Lucie’s parents? The opening lines provide a clear answer: “If my letter should reach you before my return to France,” he writes to Lucie’s parents, “I ask that you hug Lucie and our dear children on my behalf, in anticipation of the overwhelming joy yet to be felt when I hold them in my arms, and when I will finally be able to help Lucie forget the long years of terrible suffering through a peaceful and happy life.”

The military tribunal which convened to review Dreyfus’ case found the accused guilty once again, this time of less severe treason, and he was sentenced to ten years in prison. The legal battle originally seemed to have been a further defeat for his supporters (led by Mathieu and other relatives). However, a month after the verdict, the President of the Republic pardoned Dreyfus – on the condition that he confess to his crime. Due to the heavy pressure exerted on him by Mathieu and his many other supporters, he reluctantly confessed. As soon as he was released he began to take action to obtain complete exoneration from any suspicion of treason.

The pain in confessing to the most despicable act a soldier in the service of the Republic could commit, as Dreyfus himself saw it, was dimmed only by the reunion with his wife and children.

The military establishment refused to recognize his innocence, and it was only in 1906, after a long trial, that the judge ruled that all the evidence and claims against Dreyfus were not credible and issued a final ruling exonerating Alfred Dreyfus of any guilt. Despite Dreyfus’ desire to return to the army, his poor state of health (the result of prolonged imprisonment in sub-human conditions) prevented him from continuing to serve the Republic. He was released from all military service a year later. He returned to the army during the First World War and stood by the Republic during one of the most brutal wars in history.

Alfred Dreyfus passed away in 1935, 29 years after receiving the presidential pardon and his freedom.

In 1975, Jeanne Dreyfus-Levi, Alfred and Lucie’s daughter, decided to transfer part of the Dreyfus Family Archive to the National Library of Israel. Out of feelings of closeness and affection for the State of Israel and the Jewish people, she ensured that the most personal and moving family letters dealing with the Dreyfus affair be transferred to the Library.

The article was written with the generous assistance of Dr. Betty Halpern-Gadez of the National Library of Israel’s Archives Department.